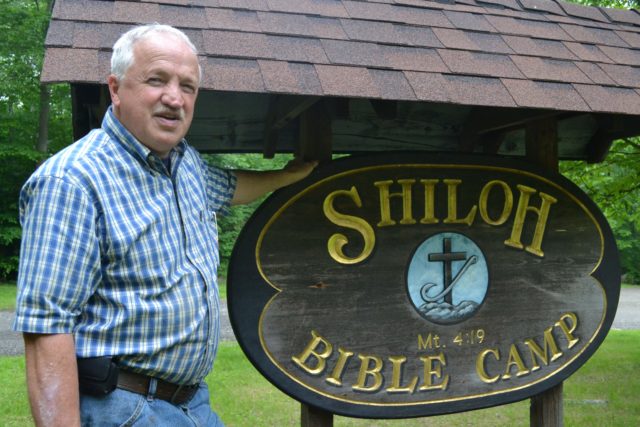 Jon Frank, Sr., a troubled 18-year old, needed peace and concluded that the only way he could get it was by ramming his motorcycle into an oncoming tractor-trailer and ending his life.

The Lord had other plans, however, and over the last 45 years, a powerful redemption story has unfolded in the woods of Northern New Jersey.

Rev. Frank is the owner and operator of Shiloh Bible Camp and Retreat Center in Hewitt, New Jersey, a place where Christian groups and young people can come for a peaceful weekend and reconnect with Jesus.

His journey, to and from the side of the road, is amazing. His home was extremely dysfunctional. He started drinking at 12 and eventually faced an attempted murder charge for beating someone up.

“I thought that if I could hurt other people the way I was hurt, maybe the pain I felt would go away,” he said at Camp Shiloh’s office.

The pain didn’t go away, however. It got worse.

Jon attended Catholic schools, but rebelled against the Lord. He gave himself to motorcycles, drinking, and fighting.

“I just saw my life falling apart and I thought that the best way out was to commit suicide,” he said.

In 1972, he stood along the Monksville Reservoir in Hewitt and waited for a bus or an 18-wheeler to come along. It would be quick and painless, he thought. Then, something happened.

Bob DeYoung, a carpenter and a deacon at Ringwood Baptist Church, was driving a beat-up van with Jesus stickers on it and pulled up next to Jon and his motorcycle. The man thought the motorcycle had broken down, but the teenager was the one in need of repair.

“He just told me, ‘Hey, Jesus loves you and I love you.’ He stuck his business card inside my pocket and said that if I ever wanted to talk, I could go see him,” Jon said, thinking that the encounter was weird.

But he did take the man up on his offer. He visited Mr. DeYoung, who gave him a big hug when he showed up at his house. The gospel was shared over a cup of coffee.

Jon went back to the house for dinner the next day and spent time with the man’s family.

“I couldn’t believe it. They were so nice,” he said. “I thought that all families were dysfunctional like mine.”

That summer, Jon gave his life to Jesus. The only thing Mr. DeYoung asked in return was for him to help someone the same way he was helped. And he has. Hundreds of times over.

Jon retired as a technician with General Motors at the age 35 and wanted to do something more with his life. He attended Philadelphia College of the Bible (now Cairn University) and Westminster Theological Seminary, earning a degree in Bible and Pastoral Counseling. He became a youth pastor. He and his wife Sandy, a nurse, began volunteering at Echo Lake Baptist Church and took a few troubled men into their home to stay with them and their five children. They would later adopt three boys.

Throughout the next 15 years, the family took in 200 young men. More than half of them never returned to their former ways of living.

“If you can help one person get out of the grip that Satan has on them, that makes it all worth it,” Jon said. “But, eventually the neighbors said, we love what you’re doing, just not here. So I started looking for a piece of land and found one right in our home town of West Milford. I knew it would be perfect for what I wanted to do.”

Shiloh Bible Camp and Retreat Center is located up the road from the spot where Jon nearly took his own life on the side of the road. The 12-acre tract of land is surrounded by hundreds of acres of woods. It is a very quiet, very peaceful place.

The Franks sold their home and used money from their savings to purchase the land and turn it into a retreat center. It was named Shiloh, which means “place of peace.” It is where the Israelites set up the tabernacle after their conquest of the holy land the Lord promised them.

The Lord has done the same thing with the Frank family.

Over the years, Jon has been a Bible teacher at Ringwood Christian School, a counselor, and served as an interim pastor of several churches. His son, Jon Frank Jr., is a pastor at Cornerstone Christian Church in Wyckoff, the family’s home church. 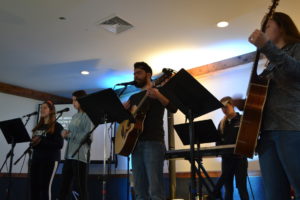 Shiloh can accommodate up to 85 people. A few years ago, a 14,000 square foot Adventure Center was built. The majestic building houses a game room, a large meeting room, a high ropes course, basketball court, a rocks course, and other amenities to accommodate young people. The Adventure Center and all the buildings at the camp, including Shiloh Lodge and Fort Shiloh, were all built by staff and volunteers. Frank is currently expanding the facility by adding a balcony off the kitchen and dining room, a new maintenance building, and an indoor pool.

As he reflects on his testimony, Jon references Mathew 4:19, the scripture on the sign at Camp Shiloh’s entrance. It is the verse where Jesus met Simon Peter and Andrew, calling on them to be fishers of men.