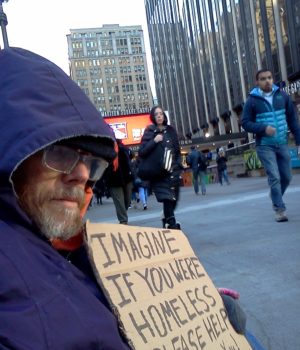 “Imagine if you were homeless.”

Those were the words written on a cardboard sign held by Juan Galloway when he lived on the streets of Manhattan this winter to experience what it was like to be homeless.
Galloway serves as the president of New York City Relief. Under his leadership, staff and volunteers board The Relief Bus on a regular basis and deliver food and drinks, essential items, help with social services, and the gospel to the homeless in New York and New Jersey. The Relief Bus vehicles are converted school buses turned mobile outreach centers.

In the beginning of January, Galloway sensed the Holy Spirit telling him to live on the streets of New York City for a week.

Galloway described it as less of a social experiment and more of a spiritual pilgrimage. Starting on March 11, he took to the streets with nothing but a few items and an open heart, ready to hear and learn what God wanted him to.

During the previous week, he saw a homeless friend named June, a 69-year old native of Trinidad. Galloway has known her for 10 years. “

“I had been looking for her for a couple months and had a strong compulsion to get her off the streets,” he said. “[When I saw her,] I talked to her about my plans for the following week and asked for tips and if I could follow her routine. She said yes.”

On the first day, he followed June’s daily routine, which was to stay up until 1 a.m. in Penn Station, go on the E Train and sleep there until 5 a.m., come back to the station, and go to Saint Francis Cathedral, where they serve breakfast every morning.
Galloway even panhandled on the streets. “I had a cardboard sign and sat on the sidewalk. That was an eye-opening experience—to feel what it feels like to be so low; to see how people ignore you; and to see how invisible you become.”

He was given half-eaten food and most people avoided eye contact. “I was especially touched when they would stop and look me in the eyes, which was not often. But just receiving a look of care was very meaningful. It’s an emotional thing to understand what people (on the streets) are going through…”

One thing that stood out was the kindness of the homeless people themselves. Galloway met a man named Billy while on a line for hot food and coffee. “He was incredibly friendly,” he said.

“I went to get a second cup of coffee and they were out…Billy offered me his last gift card, which was a Dunkin Donuts card. It’s unexplainable for someone to do that. I was so struck by his incredible generosity.”

Homeless people also offered him a job lead, advice on where to sleep, and even gave him a brand new toothbrush when he was inquiring where to get one.

Taking the advice of a homeless man, Galloway spent his last night sleeping on the floor of the Greyhound Bus waiting area of Port Authority. He described it as actually better than sleeping in some of the shelters. 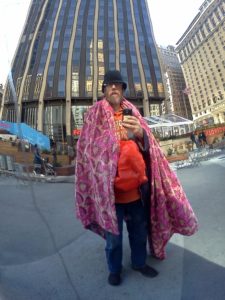 Throughout the week, Galloway prayed that God would teach him and speak to him about vision. One of the most surprising moments came when he was panhandling across the street from Trump Tower. “I thought this was kind of symbolic, I was going to pray for the president, pray for our country, and pray for how our government takes care of the homeless,” he said.

It was then that a group of young women came up to him and asked him his name. “I was surprised because people don’t usually ask. I answered and asked their names. They sat down on the ground and talked to me, asked how I was doing.” Galloway had a conversation with them and they asked him if they could pray for him. “I said, ‘Well I’m on a spiritual pilgrimage this week and I’m asking God to reveal himself to me more and show me how to love people more.’”

The girls laid hands on him and prayed for him. He soon found out that they were serving with his own ministry—The Relief Bus.

“That was such a sign from God,” he said.

Galloway noted how the experience amplified the need to humanize people and truly listen to what they have to say.

“I have learned in a greater way how to truly be present to the broken, not just angling to give them good advice or get them physical help,” he said.

Following his week in New York City, Galloway spoke at Liquid Church about his experience. After the service, he was approached by a woman who told him she had seen him on the streets. She recalled first walking past him, but after feeling a conviction from the Holy Spirit, the woman turned around and handed him some money. She was shocked to see him speaking at church that morning.

In the message he gave that day, he quoted his father, New York City Relief Founder Richard Galloway: “The poor are not a problem to be solved; they are a portal to the heart of God.”

“I saw Jesus amongst the poor,” Juan Galloway said. “ The Lord was changing me and melting me.”

Editor’s note: Although New York City Relief is experiencing tremendous success in ministering to people on the streets here in Metro New York, the financial need is great this year. Please consider giving a tax-deductible gift to this ministry at www.newyorkcityrelief.org or by downloading the New York City Relief app on your phone.