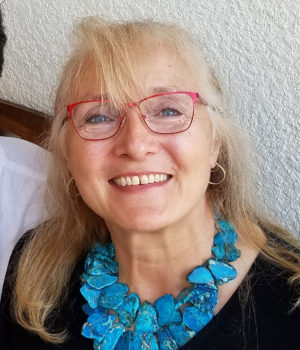 Creating powerful communicators for Christ. That is the mission of Cathy Gonzalez, mother of four and a longtime theater and literature teacher.

For more than three decades, Gonzalez has been training her children and her students to dig into scripture and to use discernment of the spiritual realm and society. “It’s almost an impossible era in which to raise godly children. It is much different than our parents’ time,” she said.

According to Gonzalez, a big part of raising children means “helping them to manage their weaknesses and build on their strengths.” And strong is what her children have grown to be. Gonzalez and her husband Alex—who raised their family in Union City and North Haledon—are thankful that all of their offspring are focused on ministry.

“We said to [them], ‘We have sacrificed and poured into you and now you will pour into others’ lives,’” she recounted.

Christian, 36, an alumnus of Harvard Graduate School of Design, recently wrote a book about Los Angeles artists and their faith. He speaks on philosophy in international settings and is currently working on “Estuaries,” a project intended to connect Ivy League students to Christ.

Gian Paul, 34, is a popular motivational speaker and the executive director of the Hope and Future Youth Center in Union City, NJ. An All-American basketball player at Montclair State University, he serves as Protestant chaplain for the New York Giants through Athletes in Action.  In the 2011 football season, Gian Paul gained recognition in major media outlets after some players credited his “All In”-themed chapel message with helping the team turn around its season. “All In” became a movement, with the slogan printed on tens of thousands of towels at home games, and the Giants went on to win Super Bowl XLVI by upsetting the Patriots.

The third son, Daniel, 24, recently returned from a three-year term ministering with Youth With A Mission (YWAM) in New Zealand, Ireland, Thailand, and remote villages in Nepal after the infamous earthquake there. Daniel remarked to his mom that while in these places, he often “thought about the scriptures that she had invited him to memorize.” After these years of selfless serving, Daniel headed to college this fall.

Finally, daughter Ariel, 22, is a foreign language enthusiast who has studied Russian, French, and German. She is currently earning her degree and has future plans to minister to those stuck in the world of human trafficking.

Dovetailing with her passion for parenting is Cathy Gonzalez’ love of teaching. With a mom that was an assistant principal, she has always been around education. Gonzalez taught in the public school system in Union City, and as a speech therapist with the Hudson School. She and her husband Alex also served as youth leaders at that time and saw, in some instances, what happened to churchgoing kids who drifted from the faith. When it came time to educate their own children, the couple fervently prayed and decided to go the home school route.

Teaching her children started early. She recounted how her son Christian, “an amazing child,” demanded to be taught reading at age 4.

She was very concerned about exposure to screens (TV, video games, etc.) and the sources of influence that they were. The children were limited to about an hour a day and Gonzalez often focused on hands-on experiences—making crafts, going to the library, catching bugs and researching them.

In the household, she described a climate where God and His Word were kept at the forefront and where a healthy childhood was the goal. “My biggest thing was to fight for my children’s childhood,” she said. “I was told I was stunting their growth [by protecting them from worldly influences], but I felt they must have a childhood of innocence and purity.

“It was really hard at first, but I felt the Lord telling me to explain the spiritual side of things to them.” And so she did, using children’s level Bible stories and simple concepts.

“Their minds are little computers,” she said. “What you put in is what you want to get out of there. And you can’t expect that anyone else will do it for you. The kids that we saw in our youth group [that fell away] didn’t have anyone doing that for them.”

The goal was also to have a home where the Word of God would “wash” the mind, as it says in the Bible. At an early age, her children were memorizing verses.

As they got older, Cathy and Alex Gonzalez challenged their children to seek purity and examine influences in the world around them—from choosing music with positive lyrics, to examining themes in media. “As a parent, you can’t count on the church to teach Jesus; you need to do it at home,” she said. “Teach them that they are responsible to go after God.”

This is the same approach that Gonzalez takes as a teacher of homeschooled students in Florida, where she now resides with her husband. She trains her students to discern godly versus ungodly themes in literature and films: “Every piece of media you look at—there is an agenda in there. You have to ask yourself, ‘What do they want me to believe?’”

It’s a tall order to teach young people to stand firm in the current social climate, but Gonzalez remains committed to the task. “If you take time to grow strong spiritual roots and a trunk in your children,” she says, “they will be strong to weather the storms of this world.”