By Terry A. Smith

Leaders have inordinate power to create environments where dreamers and their dreams can flourish. Conversely, leaders also often have the terrible power to engender environments where dreamers are discouraged, and their dreams are crushed. In extreme cases, dream-killing environments may be spawned by a leader whose heart is dark and who, out of that darkness, speaks harsh and destructive words or worse. More often, I think dream-negative environments exist because even well-intentioned leaders too often do not pay careful attention to the dreams of those they lead.

Leaders usually have dreams of our own, or ones for the organization we lead, but that does not mean that we intentionally welcome dreamers or entertain their dreams. If we are not careful, we may practice a benign neglect when we should be proactive dream provocateurs. Leaders should use whatever power we have to celebrate dreamers and challenge them to dream even bigger. We should inspire people to refine their dreams and to believe and pray and work and sacrifice to make those dreams come true. Simply put: Hospitable leaders are hospitable to people and to their dreams. We love it when we find ourselves leading people whose heads—and hearts—are full of dreams.

History is littered with leaders who appeared to believe that the primary purpose of their leader power was to make their own dreams come true. Of course, leaders must have dreams, and the bigger our dream, the better. But I submit that a central emphasis of our dream must be to serve the dreams of the people we lead. We must be able to focus on the goals of the entity we are leading—a company, a family, a football team, a nation—while focusing on the dreams of the individuals in it.

I frequently tell my congregation that I get up every day to do everything in my power to help them see their God-inspired dreams come true. It’s amazing how people respond to a leader who they know is hospitable to their dreams. In his book, The Virtues of War, Steven Pressfield uses powerful leadership language about Alexander the Great. Alexander explained that what made his armies so wildly successful was the heart of the individual soldier and each soldier’s will to fight. His soldiers’ hearts were forged—and their wills inspired—in response to Alexander’s passionate leadership. He poignantly describes how the first time he led men into battle, “I was so overcome I could not stay myself from weeping… I was moved by the sight of them in such brilliant order, by their scars and their silence, the weathered creasing of their faces. When the men saw my state, they returned my devotion, for they knew I would burst my heart for them.”

I love this picture. Alexander’s men marched into victorious battle again and again with burning hearts in response to a leader they knew would “burst [his] heart” for them. As a leader I want people to hear my voice, and passionately and willingly follow me because they know I am not just leading them to fulfill my God-given dreams. My heart bursts for them. I want to lead them to more and better life than they ever dreamed of.

Richard Daft, in The Leadership Experience, writes that there are five basic types of leadership power in organizations: legitimate power is derived from occupying a formal position of authority; reward power “stems from the authority to bestow rewards;” coercive power allows someone to “punish or recommend punishment;” expert power is the result of someone having more expertise than others; and referent power “comes from leader personality characteristics that command followers’ identification, respect, and admiration.”

Jesus was the ultimate hospitable leader. He promised his followers that he would give them “more and better life than they ever dreamed of” (John 10:10 MSG). I want to be a leader like that – hospitable to people and their dreams. 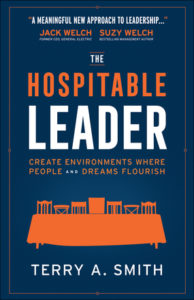 This article was adapted from the new book by Terry A. Smith, The Hospitable Leader: Create Environments Where People and Dreams Flourish (Bethany House Publishers). For more information on this book, bonus materials, or a preview of the audiobook, please visit http://hospitableleader.com.

Terry A. Smith has served as lead pastor of The Life Christian Church in West Orange, NJ for 27 years. He is also the cofounder of LEAD.NYC.