A toothless, one-eyed man named Billy, who lived on the streets, offered me his last gift card. My own self-centeredness was assaulted by the reckless kindness of this stranger with a scruffy beard. Who was this man and why would he do this? I was learning lessons on true wealth and doing justice from what appeared to be the most unlikely of teachers during my week living on the streets of New York City. Talk about not being able to judge a book by its cover…

Being poor isn’t just being broke. Being poor is something you are branded with by society, or even yourself, as a negative identity. It is being stamped with a scarlet letter that defines your worth by your current situation.

It is human nature (the bad part of human nature) to wonder why a person is poor and surmise whether they deserve our help or not. We reason that people who struggle financially are just getting what they deserve. We know that we, ourselves, have gone to great lengths to avoid poverty: studying hard in school, working hard to move up the career ladder. We immediately assume the person in poverty must not have the same values or work ethic as we do, otherwise they wouldn’t be poor.

The Catholic activist Dorothy Day once said, “The Gospel takes away our right forever, to discriminate between the deserving and the undeserving poor.”

The Bible is quick to affirm the dignity of the poor and condemn those of us who dishonor them by showing favoritism:

Listen, my dear brothers and sisters: Has not God chosen those who are poor in the eyes of the world to be rich in faith and to inherit the kingdom he promised those who love him? But you have dishonored the poor… But if you show favoritism, you sin and are convicted by the law as lawbreakers. (James 2:5-6, 9)

I learned firsthand how much I had to learn from those who are poor when I spent a week living on the streets of New York City in March of 2018. I saw Jesus up close and personal in the lives of many people challenged with homelessness.

I was shown great generosity by Billy, who, although he sleeps on a piece of cardboard every night, offered me his last Dunkin’ Donuts gift card. This angel in disguise told me that what he really desired in life was to be surrounded by friends. His wisdom made me wonder who was rich and who was poor.

Another man named Jacques, whom I met at a soup kitchen, offered to teach me a trade, painting houses, and give me work. He also showed me how to sleep in the Port Authority bus terminal without getting arrested. Instead of judgement, these men offered me kindness and assistance when I had done nothing to deserve it. This changed me.

One of the stigmas that go along with poverty and homelessness is the assumption of addiction. You might assume that most people experiencing homelessness are addicted to drugs or alcohol. While that is definitely an issue, the most recent survey of the top three causes of homelessness did not list addiction: The top three causes were 1) lack of affordable housing, 2) unemployment, and 3) poverty (survey by U.S. Conference of Mayors).

Stevenson describes poverty as a condition of disfavor—of being looked down upon and judged as undeserving. As followers of Jesus we are called to defend the weak and fatherless (Psalm 92: 3-4), be agents of justice, and stand up for what is right. We know that the blessings God has given us are not only for us, but for others in need.

Our job is not only to assist people in escaping poverty, but in escaping the stigmas that go with it. We do that by associating with them and showing solidarity in our common humanity. That is why at New York City Relief we set up chairs and tables to break bread together with our friends who are unhoused.

In many cases it is true that people have made bad choices that have contributed to their poverty. Our flesh finds it difficult to have compassion on someone who has rebelled against wisdom and embraced foolishness. Maybe that is why Socrates said, “Those who are hardest to love need it most.”

Of course, everyone has made foolish choices, but not all of us have had security nets such as a stable family, education, or a network to fall back on.

Stevenson goes onto say, “Each of us is more than the worst thing we’ve ever done.” This idea is echoed in the life of Jesus, who, rather than judge and condemn the sinners he met, offered mercy. Where others saw trash, he saw treasure. Jesus knew that one way to destroy stigmas and crushing labels is to draw near to those suffering from them.

Jesus drew near to us, though we were undeserving and hard to love. He laid aside fairness to give us what we didn’t earn. This is how he calls us to do justice—by offering the same grace we were given.

Despite being challenged with homelessness, my mentor Billy taught me a powerful spiritual lesson through his actions. He lived out the truth of scripture in Micah 6:8, “He has shown you, O mortal, what is good. And what does the Lord require of you? To act justly and to love mercy and to walk humbly with your God.” Thank you Billy, for showing me how to love like Jesus does. 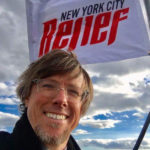 Rev. Juan Galloway is president of The Relief Bus, a mobile outreach that feeds the homeless and connects them to resources where they can find help. Please consider giving a tax-deductible gift or volunteering at www.newyorkcityrelief.org or by downloading the New York City Relief app on your phone.