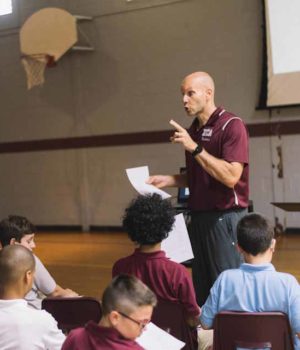 Editor’s note: The following article, on the responsibility that comes with being in the spotlight, recently appeared on Hawthorne Christian Academy’s blog. Reprinted with permission.

One year after graduating from Eastern University in St. David’s, Pennsylvania, I was given the opportunity to play basketball for the New York Nationals. Most people did not know who the Nationals were, and that is because our opponent was much more famous than we were. We traveled from city to city as the opponent of the Harlem Globetrotters.

I will never forget a game that I played for the Nationals in the winter of 2001. The game itself was pretty typical. We played in a big arena, the Globetrotters beat us by a comfortable margin, and after the game there was an autograph session for the fans. Now the autograph signing was for the Globetrotters, but there were always fans that would come over and ask the Nationals for their autographs, too. Sometimes they would ask us to sign their basketball or T-shirt, and sometimes it was just to sign a piece of paper.

This autograph session stands out because of something a young boy said to me. He came up to me and asked me to sign his ball, and while I was signing it, he asked, “Are you better than Michael Jordan?”

I looked up at him, expecting to see a sarcastic smile on his face, but I actually saw something different. He was very serious and was waiting for my answer.

I couldn’t understand why he asked me that question. Didn’t he just watch the game? We got killed, and I didn’t even play very well. How could he possibly think that I might be as good as the greatest player who ever picked up a basketball?

I was tempted to say, “Yes.” I mean, this was my only chance to ever have someone think I was actually better than Michael Jordan. But I couldn’t do it. I looked at the boy, smiled, and said, “Buddy, not even close.”

Being in the spotlight means that you are being watched. All athletes are in the spotlight. Whether you are playing for a fifth-grade rec team, or a high school varsity team, or are in the pros – you are being watched. Individuals, especially young ones, are drawn to people who are in the spotlight. All athletes have a chance to be a good or a bad example to those who are watching them. The apostle Paul tells us, “Whatever you do, whether in word or deed, do it all in the name of the Lord Jesus” (Colossians 3:17). Let’s take that challenge every time we go on the court (or field), knowing that we are setting an example to those around us.

I will probably never meet that boy again, but I will always remember the way he looked at me just because I was an athlete. To be able to play or coach a sport is a gift from God, but with each gift comes the responsibility to use it the right way.

Kevin Standford is a physical education teacher at Hawthorne Christian Academy and the founder of the Fast Break Basketball Camp.