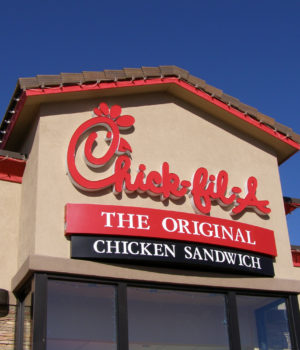 A prominent New Jersey university has taken Chick-fil-A off the menu due to the company’s perceived anti-LGBTQ stance.

Rider University students voted in a fall survey for the fast casual restaurant to open on campus.

However, the private university sent another survey to students that excluded the Christian-owned company from consideration, “based on the company’s record widely perceived to be in opposition to the LGBTQ+ community,” the university said.

‘They sell chicken, so as far as I am concerned that should be the focus.’

In recent years, Chick-fil-A has been scrutinzed by gay activists because its founders believe in a biblical view of marriage, that the ordinance is reserved as a union between a man and a woman.

“We understand that some may view the decision as being just another form of exclusion. We want to be clear that this was not the spirit in which the decision was made,” Rider’s President Gregory Dell’Omo and Vice President for Student Affairs Leanna Fenneberg said in a statement. “We fully acknowledge an organization’s right to hold these beliefs, just as we acknowledge the right for individuals in our community and elsewhere to also personally hold the same beliefs.”

Chick-fil-A is closed on Sundays, a policy enacted by its Christian founder, S. Truett Cathy, a devout Southern Baptist. The company’s website states that Truett, “saw the importance of closing on Sundays so that he and his employees could set aside one day to rest and worship if they choose.”

Chick-fil-A has a history of donating to Christian organizations and advocacy groups, including ones that oppose same-sex marriage.

Rider University in New Jersey removes the fast-food restaurant Chick-fil-A from a survey of dining options "based on the company's record widely perceived to be in opposition to the LGBTQ community." https://t.co/SPc9tUECpn

As a graduate of Rider, I’ll await the request for a another donation and let them know my extra money is for Chick-Fil-A🤷‍♀️….