Our world is full of depressing statistics and many broken lives, but once in a while, we hear an inspirational story of triumph over tragedy and victory against all odds. In My Father’s Shoes: Healing the Father Wound, a book I co-wrote with Malik Carey, captures the true-life story of a man who was transformed from statistic to a CEO! On Feb. 23 (11 a.m.-3 p.m.), we will host a book signing at Jesus Book and Gift Store, 675 Route 1, Iselin, NJ.

Statistically, the greatest factor that increases the risk of early drug and alcohol use, pre-marital sex, problems in school, and incarceration is having no father in the house. Malik’s father left his mother when she told him she was pregnant. He became those statistics and others. Though he never met his father, he became his father. His father had eight children by six women. Malik had his first child at age 20, followed by six abortions and a miscarriage, but there’s more than that. Growing up he was always told, “You are just like your father,” in both good and bad ways. He grew up wondering who this man that he was so much like and why he wasn’t around.

He became a statistic when he was born to a single mother, and then it got worse! Kicked out of school in the 7th grade for having a joint. Alcohol use at age 12, dealing cocaine at 16, using at 17, jailed at 19 with his son being born while incarcerated. Later came divorce and a downward spiral caused by the gaps of what his father never taught him and compounded by bad personal choices and simply flowing with the crowd.

Better on the Outside, Broken on the Inside

Malik, like many others, learned to fight and win on the outside while continuing to be broken on the inside. He knew how to make money when he owned a construction company, a mortgage company, and as a salesman. Nice cars and beautiful women painted a nice picture but the gaps of confidence, lack of life skills, and not understanding of how to be a real man compounded by disconnection from God, would eventually cause everything he built to fall apart. Unfaithfulness to his wife led to divorce and the cycles continued.

Using Life’s Worst Moments as a Launch Pad to Purpose

Somehow Malik learned to turn his worst moments into launch pads to his true life purpose. After a long night of partying, he went into a cocaine seizure and cried out to God to save him. He promised he would never do cocaine again. God answered his prayer and he never used again. Going to jail a second time caused him to truly surrender his life to Jesus. Reuniting with his father allowed him to wrestle with unanswered questions and move forward in life. His father’s unexpected and untimely death drove him to start his business and become the CEO of The Family Healing Center (www.familyhealingcenternj.com) which is a full-service  counseling center that employs psychiatrists, psychologists, counselors, and life coaches who now help others heal. 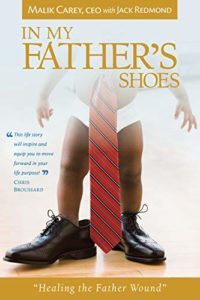 Victory is a Journey

None of the changes came without pain, hard work, and a deliberate process. In my Father’s Shoes chronicles the emotions, fears, and failures followed by the path and specific steps that led him to becoming a CEO. Healing and growth are processes needed to live out our purpose. True life change begins when we look in the mirror and understand that we must choose a better path. Key steps include letting God lead, surrounding yourself with the right people, getting help to heal and constantly learning and growing.

It’s How You Finish

Like many of us, Malik did not have a good start but we all have a choice to make. In life we are all dealt a hand with both good and bad cards. Over time, we can trade out the bad trends in our lives, families or what society hands us for better. In My Father’s Shoes demonstrates that it’s not how you start but how you finish that really matters. If you want a better life, you must head in a better direction and take that first step…