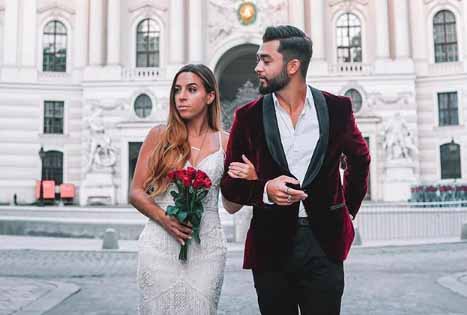 BERGEN COUNTY, NJ — Nick and Zoe Aust knew when they were dating that they loved to travel. They both dreamed of dropping everything and traveling the world someday.

Turns out that “someday” was shortly after their wedding day.

The Bergen County couple worked and saved for two years to travel the world. When they got married on New Year’s Eve 2017, their journey began. The Austs, alumni of Hawthorne Christian Academy, embarked on a 10-month, 33-country honeymoon.

But in a unique twist, they bought their wedding attire with them and wore it at different locations on the trip. The posted the photos on Instrgram and a blog called “Marry Me In Travel.”

The couple was recently featured in a People Magazine article and on NBC Today Show segment.

Some places on their journey included: Thailand, India, Egypt, Sri Lanka, and New Zealand. The trip ended in October in Seychelles, an island nation off the east coast of Africa.

The posts have garnered hundreds of “likes” and comments on Instagram.

“The reactions we’ve received have been comical at times! When we first told people what we were doing we did get a few blank stares. A few, ‘Don’t you want to buy a house though?! And many, many, ‘What are you going to do all day long for 10 months?” Zoe Aust said. “Many of those opinions changed once we left and started posting pictures. Peole who were wishing they could do the same.”

The experience humbled the Austs.

“If you ever need a humble check, see how the people in Nepal live, or in Fiji, or in India or Sri Lanka, see what they possess and you’ll realize you don’t need much to have a happy life,” Zoe Aust said. “When we came home we both freaked out a bit. We have so much stuff. It really puts things in perspective.”

But the journey also gave the couple a chance to see some of the most breathtaking parts of God’s creation.

“To stand in front of the largest mountain, to be able to see some of the most beautiful beaches, to travel through deserts, to adventure through jungles and to even get the chance to explore areas where Jesus was throughout Israel, it was all mind-blowing and we were constantly in such awe,” Nick Aust said. “Zoe and I talked about it frequently and we saw so many cool man-made cities and such cool architecture. But we always were on the brink of tears and at our happiest when we’d see some of the landscapes and beautiful places God created. It was really so amazing and we feel so blessed to have had the opportunity to do what we did. We know it’s not feasible for everyone to do exactly what we did, but that doesn’t mean you still can’t get out and travel and want to see more of God’s creation.”