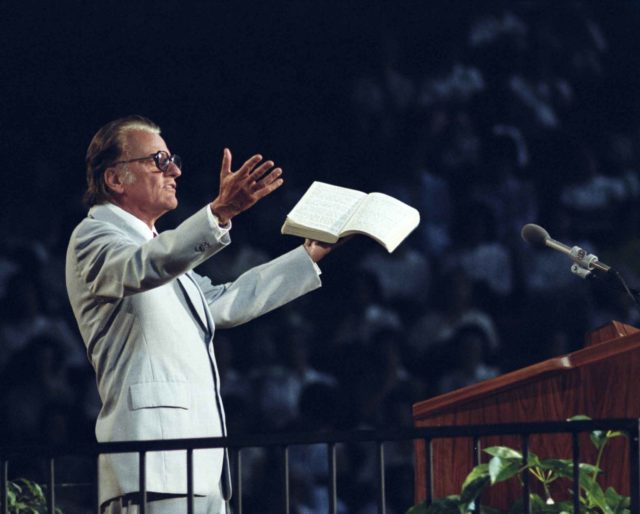 Editor’s note: this article originally appeared at tristatevoice.com in 2018.

Greater love hath no man than this, that a man lay down his life for his friends. – John 15:5

Prior to his 2005 New York Crusade, Billy Graham, 88 years-old and in declining health, expressed his great love for the city. He recalled an emotional meeting with Music Director Cliff Barrows and how the two men talked about past crusades in the Big Apple and then prayed “that God would do it again.”

Rev. Graham, noting his health challenges, said, “I am willing to die for that city.”

For three summer nights at Flushing Meadows Corona Park, this bold lion in winter preached the Gospel. The crowds—over 70,000 strong each night—came forward and believed, just as they did during the historic 1957 Madison Square Garden crusade that lasted from Memorial Day until Labor Day. Rev. Graham’s love affair with New York and his willingness to give everything he had for the city began that summer.

In God in the Garden: The Story of the Billy Graham Crusade, Curtis Mitchell wrote about the toll the 16 weeks took on the young preacher: “For 110 days, through 97 meetings in Madison Square Garden, [Graham] battled the devil in the metropolis known as ‘the graveyard of evangelists.’ The only weapons were prayer and repeated declarations of God’s love and judgment.”

“He had fought a good fight. It has sliced 18 pounds off his lean, weary frame.”

Mitchell wrote how two million people heard Rev. Graham face to face during the New York Crusade. More than 56,000 men, women, and young people came forward and made decisions for Christ. Something special had happened and the moment was not lost on Rev. Graham.

“New York probably looks the same,” he said in the book. “The crowds still throng Times Square. There are still people going to nightclubs. There’s still lots of crime in the city. Yes, but there is one difference. One tremendous difference! The difference in the lives of the thousands of men and women who will never be the same.”

Yes, New York was never the same each time this man of God came to bring us good news. In all, there were eight crusades in Metro New York. For me, Rev. Graham’s visit to the Meadowlands’ Brendan Byrne Arena in ’91 was eye-opening and life-changing.

A young sportswriter and a young believer, I sat in the crowd multiple times at that five-evening crusade. Night after night, he captivated the people with Bible verses, calls for repentance, and a knowledge of current events, entertainment, and pop culture. And night after night, they responded by coming to the altar to find forgiveness, to find new life, to find the love of Jesus Christ.

In 1995, when the opportunity came to assume the role of publisher of Tri-State Voice, I remembered Rev. Graham at the Meadowlands and wondered if God was calling me to use my gifts to impact people through media and the written word. For the last 25 years, I have had the honor to be a voice to the people of Greater New York by telling its stories from a Bible-centered worldview.

Covering the 2005 New York Crusade at Flushing Meadows was one of the highlights of my career. I still have my press credentials and the event’s promotional poster hangs in my home; the white-haired evangelist is humbly bowed against a black background and one phrase stands out in capital letters: PRAY.

“God loves you. He will forgive all your sins,” he told the crowd in the summer of 2005. With a sense of urgency, he reminded them about the frailty of life and that tomorrow is not guaranteed: “You have come to this crusade and are expecting to live many more years. But this may be the last day of your life.”

When it was over, approximately 8,400 people committed or re-committed their lives to Jesus Christ over three days.

“God has blessed us with His presence,” said Dr. A.R. Bernard, chairman of the New York Crusade’s Executive Committee. “Jesus Christ has been exalted. People have been set free by the power of God. New York City will never be the same.”

“We will feel the ripple effect of this for many years to come,” said Bishop Roderick Caesar.

Rev. Graham gave the city a special, fond farewell at that 2005 crusade in Queens. In the shadow of the Unisphere, the man who preached the Gospel to billions of people around the world, vowed not to forget us.

“With God’s help, I’ll be able to see you again,” he said. “I will be praying for New York every day when I leave here—that God will continue what He has begun. With all my heart, I love New York and thank God for it.”

RELATED: THREE TRUTHS REGARDING ETERNAL LIFE by Will Graham

One year ago today, Billy Graham left this earth and went home to be with his Savior, Jesus Christ. He spent his life…