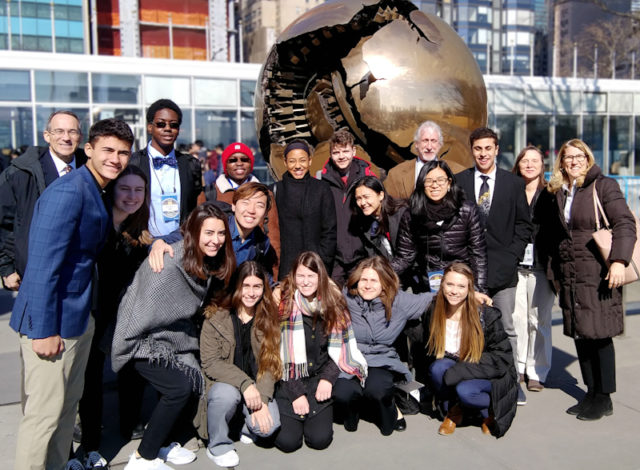 Juniors and seniors from Hawthorne Christian Academy recently joined 5,000 students from 60 countries in New York City for a unique international program. The Model UN is designed to take students through the experience of serving on a United Nations committee, wrestling with issues such as regional conflicts, the needs of displaced people groups, child labor, ethnic cleansing and more.

The event opened with America’s UN Ambassador Jonathan Cohen addressing the students, sharing his journey into a career of diplomacy. As the students moved on to their assigned groups the hallways were filled with the voices of the world as they mixed with attendees from Italy, Mexico, Saudi Arabia, Sweden, and other countries.

HCA’s students were from its Advanced Placement Comparative Government and Politics course. In their committees, each school represented a country’s viewpoint, with research having been done on the countries and issues prior to the event. Twenty-two intense hours of meetings over two days brought the students together. Solutions were debated, ideas were welcomed and rejected, and compromise brought resolution to each committee’s challenge. HCA’s Sofia Bruno (’20) reflected, “I got a different perspective on the rest of the world, as I learned about the lifestyles of peers who don’t have the same socio-economic position that I have.”

The closing ceremony was held in the United Nations General Assembly room, where each committee summarized how they addressed their particular issue. Closing keynote speaker UNICEF USA executive Anucha Browne challenged the students to stand up for what is right, reminding them that, “You are 25% of the population, but you are 100% of our future.”