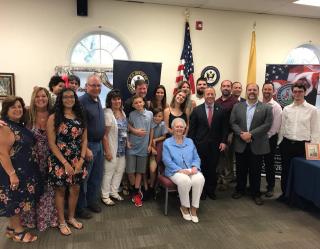 Now, whenever people walk into the Oakland Post Office, people will see his name and know of the service he performed to the United States.

Leone was a World War II veteran. After returning home from the war, he and his wife Ellen moved to Oakland. President Lyndon B. Jonson appointed Leone to the position of postmaster in 1967.

“He was quiet, but he was furiously loyal to people,” said Rev. Fred Provencher, Cornerstone’s pastor. “He remembered people, he loved food and he loved family. He was very sweet. He cared about his family deeply. He was a very warm, grandfatherly figure in our church.”

Leone was usually behind the scenes, making sure everybody was happy.

“He had a deep servant’s heart. He was a father figure to a lot of people in the area,” Provencher said. “He loved his family and loved his kids and lived a very faithful, servant-like life.”

Leone’s widow said she could not think of a bigger honor to have “his name mentioned with Oakland in the same breath.”

“To me, there is no commitment more sacred than the one to those who have bravely served our nation. Today marked a major step forward in honoring of one of these brave veterans, longtime Oakland resident, postmaster, and Fire Chief Frank Leone,” Gottheimer previously said. “I’m proud to celebrate and recognize Frank’s life. North Jersey veterans deserve any assistance they need after valiantly serving their country.”

I'm here today in Oakland at the Oakland Post Office, which will now be known as the Frank Leone Post Office, honoring the legendary man and veteran who served as Postmaster here for 48 years. The Oakland community rallied together to make this happen and that's reflected by everyone gathered here today to celebrate the renaming. I was glad to introduce the bipartisan legislation supported by every member of the NJ congressional delegation!