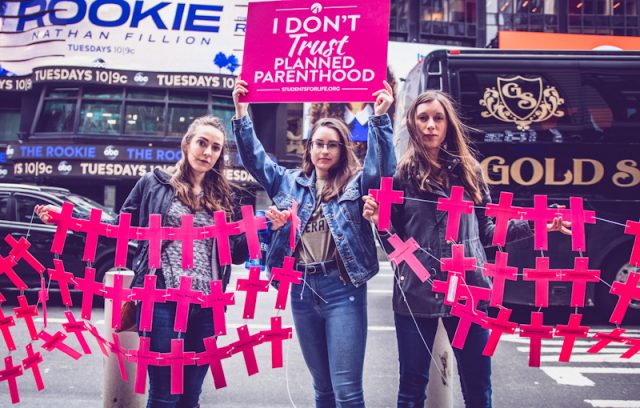 When New York Governor Andrew Cuomo signed the Reproductive Health Act into law earlier this year, local pastors like Tim Mercaldo, Joe Mattera, and Carl Lenz and pro-life organizations  condemned the legislation, which made abortion legal up until birth.

The law, which many have labeled as “infanticide,” has also inspired national pro-life and pro-family activists to descend upon New York City. On April 10-12, Students for Life of America brought its #PlannedParenthoodTruth tour to Times Square, spreading the news about “the abysmal standard of care that women endure in New York as a result of the Reproductive Health Act.”

On Saturday May 4, Focus on the Family will host Alive from New York in Times Square to protest the recent pro-abortion legislation in New York and Virginia and the United States Senate’s failure to pass the Born-Alive Abortion Survivors Protection Act.

Mercaldo, senior pastor of Gateway Church in Staten Island, is attending the Focus on the Family event. He also attended the National Day of Mourning rally in Albany in February and wrote an open letter to Governor Cuomo in protest of the Reproductive Health Act.

“I am deeply grieved and shocked by your decision to support and initiate the lifting of restrictions on abortions in the third trimester of pregnancy,” he wrote. “My perplexity is rooted in your disregard for the human being in the mother’s womb. This is, by all accepted biological scientific evidence and ethical understanding, a “human body” and “human being” deserving protection. This “child within” is the most vulnerable member of our society.” Read complete letter here

Mattera wrote an article entitled “Why Abortion Is a Gospel Issue” after the law was enacted. He is the founding pastor of Resurrection Church in Brooklyn and the leader of several organizations, including The U.S. Coalition Of Apostolic Leaders and Christ Covenant Coalition.

“I contend that we cannot separate abortion and the pro-life position from the gospel, since God made humans in His image and likeness (Genesis 1:28) and because Jesus’s innocent blood was shed to redeem believers—which is why shedding of innocent human blood is an affront to God,” Mattera wrote. Read complete article here

“We must work to defend ‘the least of these,’ or God will surely hold us accountable,” he said.

Following its annual Legislative Day life-affirming demonstration event on March 19 in  Albany, New Yorkers for Constitutional Freedoms delivered 20,689 petitions calling for the repeal of the Reproductive Health Act to the office of Gov. Andrew Cuomo. The petitions were collected through individuals and organizations allied with New Yorkers for Life.

Alive from New York in Times Square on May 4 (2:30 pm – 4:30 p.m.) is “designed to celebrate the sanctity of human life; marvel at the wonder of human development in the womb; and encourage advocacy for women facing unplanned pregnancies and the preborn.” Alive from New York will feature live music and inspirational speeches from special guests, as well as abortion survivors. The culminating moment of the event will be a live 4D ultrasound broadcast on massive digital screens in Times Square.

“Alive from New York will be a celebration of life, but more importantly, it will serve as a platform to show the world through 4D ultrasound that a third trimester baby is indeed just that: a baby—a life worthy of protection and deserving of respect,” said Focus on the Family President Jim Daly. “We’re inviting those who share our convictions – as well as the curious –  to join us in New York City on May 4 to communicate a positive, uplifting message that life matters.”

Registration is required for Alive from New York and attendance is limited to 10,000. Register here.

To sign up for the free live stream of Alive from New York, visit AlivefromNewYork.com/livestream.  (story continues below) 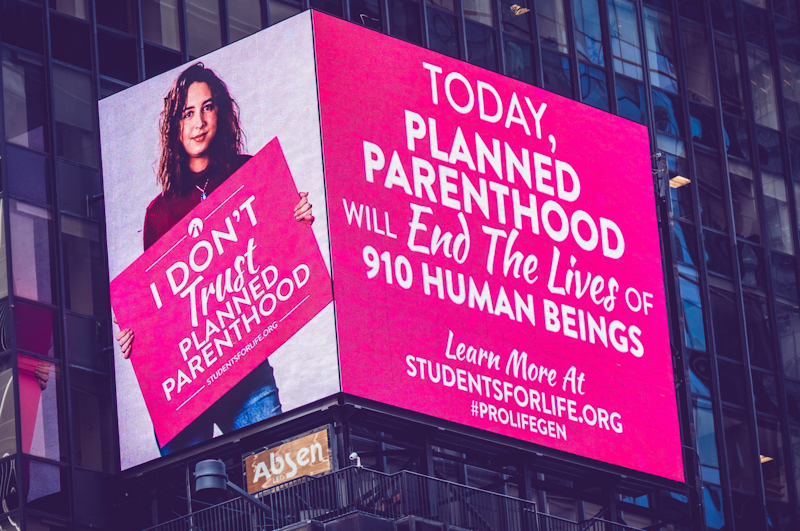 Two weeks ago, Students for Life of America (SFLA) sponsored a a pro-life video billboard in Times Square for three days. Another highlight of the event included students walking with a chain of crosses numbering more than 900, representing the number of lives lost at Planned Parenthood each day. The message of the organization’s #PlannedParenthoodTruth tour is that “women’s healthcare organizations should be regulated and inspected to ensure safety and to avoid corruption.” Staff and students collected signatures to let the New York Department of Health know that New Yorkers will not be silent as women walk through clinics that offer no protections for their patient.

Earlier this year, SFLA sponsored a poll that found only 7 percent of Millennials support the abortion extremism of New York and the Democratic Party Platform – abortion through all nine months, for any reason at all, and sometimes with taxpayer funding. A recent Marist poll found that almost 7 of 10 New Yorkers oppose late-term abortion, despite the fact that their legislators cheered as Governor Cuomo signed a radical abortion measure into law.

“Late term abortion and infanticide for babies born during abortions are barbaric and represent the human rights issue of our day,” said Kristan Hawkins, president of Students for Life of America. “The Pro-life Generation will not forget the least of these among us, mothers and their pre-born infants, who deserve our help and support.”

“The extremism of New York’s new abortion law is a wakeup call to pro-life Americans to get active.”