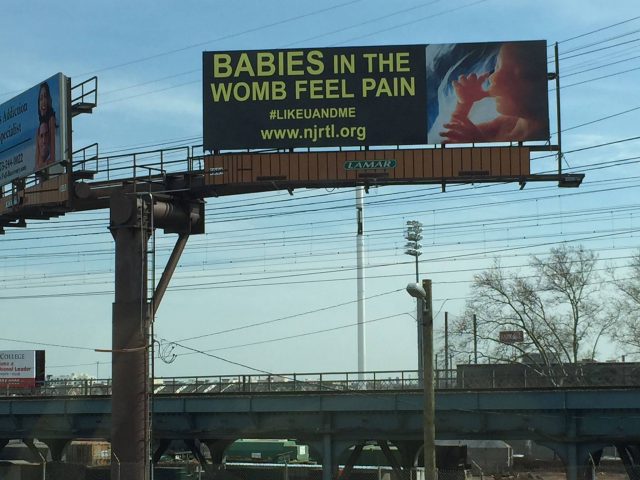 “Bringing New Jersey back to life.” That is the mission of the state’s largest pro-life, non-partisan organization, New Jersey Right to Life.

“As the premier pro-life organization in New Jersey, we continue to lead the effort on all public policy matters concerning the sanctity of human life at the state and federal level,” says the organization. “We promote, uphold, and support reverence and respect for all innocent human life from conception to natural death.”

Currently, one of the ways that New Jersey Right to Life (NJRTL) is spreading the message of life is through its billboard project on some of the state’s busiest highways. “We began the billboard project about five years ago,” said Executive Director Marie Tasy. “The goal is to educate the public with life affirming images and messages. Our billboards contain accurate, scientific information about prenatal human life, of which so many individuals are not aware.”

According to Tasy, NJRTL was formed in 1971 by physicians and attorneys who recognized that the culture was changing and decided that there was a need to form a nonprofit, non-denominational, civic advocacy organization to defend and protect human life.

“I am proud to be working for a non-profit organization that cares so deeply about the lives of others,” she said. “All of our board members, volunteers, and our very limited staff are dedicated individuals who sacrifice their time and talent because they recognize that they are working for a cause much greater than themselves.”

Though there is much satisfaction in the work, there are also challenges. “The challenges are many in a state where the political climate is so hostile to the pro-life message,” said Tasy.

“I encounter pro-life people who ask why we can’t pass this pro-life bill or that pro-life bill. I tell them it’s because the legislature and governor’s position has to change.”

Tasy said that pro-life people in New Jersey often say, “I am not interested in politics,” much to her dismay.

“The only way we can pass laws to save lives is to change the political climate and that means voting out lawmakers who refuse to move any pro-life bills and replace them with those who will,” she said. “We have to find and recruit more good men and women who will run for office and [support] the pro-life movement in New Jersey and get behind them 100 percent. We have to do this at every level of government.”

To find out more about New Jersey Right to Life or to make a donation, visit www.njrtl.org.