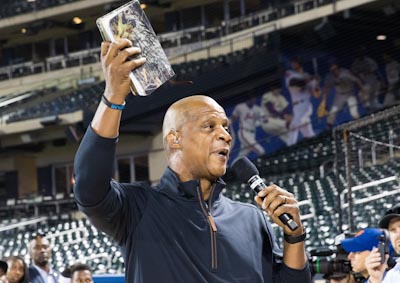 Tomas Nido’s dramatic walk-off homerun over the right field fence sent the home crowd into a frenzy and gave the New York Mets a thrilling, 13-inning victory over Detroit on Saturday, May 25. Billy Joel’s “Keeping the Faith” played over the P.A. system as some of the fans shuffled out, but despite four hours of baseball, the day’s events were not over—it was now time to meet the Mets, past and present, for an on-field program that was part of Faith Day at CitiField.

As the grounds crew watered the infield, seeds of the Gospel were being sown from a stage near third base.

“There was a lot of applause in the stadium today, but let’s lift up our voices and praise the name of the living God!” said Pastor Adam Durso, executive director of LEAD NYC and the emcee.

The New York Mets’ Faith Day—sponsored by LEAD NYC, The Hope Day Network, Christian Cultural Center, and KLOVE—also featured a pre-game, mini-concert with gospel artist Freddie Washington at the stadium’s main entrance. Pastor Steve Milazzo, the pastor of Bethlehem Assembly of God and the founder of Hope Day, threw out the first pitch, and a choir from Christian Cultural Center presented a stirring rendition of the National Anthem.

Following the game, Washington led the crowd in worship with songs “Our God is Greater” and “Lord, I Need You.” After a performance by Boots, a youth step team from Christian Cultural Center, Darryl Strawberry stepped up to the microphone. Strawberry started his career with the Mets in 1983 and quickly emerged as one of the game’s most feared sluggers. He was a core player on the 1986 World Series championship team, but, unfortunately, he partied as hard as he swung the bat, and drug and alcohol addiction haunted him throughout his career and into his retirement from the game.

At Faith Day, he credited the prayerful persistence of his wife Tracy and his faith in Jesus Christ with helping him overcome his addiction.

“Sixteen years ago, my wife Tracy was pulling me out of dope houses,” Strawberry recalled. “She said, ‘God has a plan for you.’”

And now that plan includes doing the work of an evangelist and helping others come clean from addictions.

“I had an opportunity to play on fields like this for so many years, little did I know that God would change my life forever and I would become a minister of the gospel, loving people and travelling across the country doing this great work,” said Strawberry.

“I wasn’t always like this, my life was broken, my life was empty…I was rich, I was famous, but I had nothing but a bunch of stuff. It wasn’t until I came to my knees and surrendered my life to Christ, for real—gave my heart to Jesus—that He changed me forever. Jesus healed me and restored me to righteousness and holiness. And he will do the same for you.”

“I’ve met many people, I’ve met rich, I’ve met poor, but I’ve never met a man as great as Jesus. This man is holy, righteous, and he meets you right where you are.”

Nimmo, who plays the game with passion and evident joy, is currently on the injured list with neck issues. The Wyoming native talked about trusting in God’s sovereignty and experiencing peace, despite not being able to roam the outfield and get on base as one of the team’s leadoff hitters.

“I’m going to try and stay in the Word,” Nimmo said. “I’m going to try to stay in prayer and relationship with Him, so that I can learn what He wants me to and become more like Him. I’ve just started to realize that things are going to work out exactly the way that God wants them to.”

Matz, one of the team’s top pitchers this season, said he was an agnostic before coming to Christ at age 20. Things began to change after he was invited to a Bible study.

“I became interested in who Jesus was, and what He actually meant,” Matz said. “And the first book that I read was More Thank A Carpenter by Josh McDowell. And he proposed a question: ‘Who is Jesus—is He who He claimed to be?’ ”

In More than a Carpenter, McDowell quotes C.S. Lewis, who famously said Jesus could either be “a liar, a lunatic, or Lord.”

EXTRA INNINGS: Prior to the game, Rev. Milazzo and representatives from the Hope Day Network received the Spirit Award from the Mets as Hope Day volunteers lined the warning track in the outfield. Hope Day, held on June 1, is a community outreach held in various locations across Metro New York. Volunteers from churches and community organizations mobilize for “acts of compassion” to children and families by meeting some of their basis needs, including free groceries, medical and dental screenings, job fairs, haircuts, games and activities for children, and live entertainment.