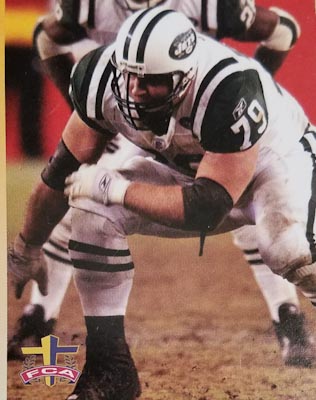 Dave Szott was the guest speaker at a recent gathering of the Bergen County Chapter of the New Canaan Society. The former New York Jets’ player brought a game plan for life to the men who meet on a weekly basis at the Brick House restaurant in Wyckoff.

A Clifton, New Jersey native who also played with the Chiefs and Redskins over a stellar 14-year career, the 6-foot-4 former All-Pro offensive lineman spoke about the importance of preparation.

Szott, the Director of Player Development with the Jets, pointed out how football differs from other professional sports in regards to the amount of time spent practicing versus actual game time. Players work out for most of the off-season, and then come to mini-camp in April and training camp in the summer. When regular season games finally begin, countless hours of training, meetings, and practice all lead up to only about eight-minutes (from “each snap to whistle”) of actual game action each week.

“Your goal is to impose your will on another man who has also prepared all week,” Szott said.

And when all that preparation leads to success, it is sweet.

“There is no greater moment—after pounding on [your opponent]—when he doesn’t want to fight anymore around the third quarter,” he said.

Szott, who attends Bethany Church in Wyckoff, said the same principles of intense preparation apply in life. Instead of two-a-days in full pads, he exhorted the men to be prepared for any situation with Bible study, going to church, reading the Word, prayer, etc.

In life, “the will we have to impose on is our own will—our own voices in our heads, temptations, and distractions. The toughest will is our own.”

Szott shared a story about spoke about a chance to witness to a new friend on a hunting trip and how preparation enabled him to have the courage to step out in faith and boldly share the Gospel–that Jesus Christ died for our sins; and if we confess Him as Lord and Savior, we will receive eternal life.

“It was all preparation for that one encounter.”

We have to prepare for “our ‘eight minutes’ of competition,” Szott said. “We have to impose God’s will on our own lives.”

EXTRA POINTS: In a Q and A session, Szott beamed with pride when he asked about the challenges associated with his 24-year old son, Shane, who has cerebral palsy. For his charitable work on behalf of cerebral palsy, he was named 1996 NFL Man of the Year and was a 2003 United Way Hometown Hero. Szott’s wife Andrea is the Community Engagement Officer for New York City Relief.  Jets fans may have reason for optimism as Szott called new head coach Adam Gase and defensive coordinator Greg Williams two of the brightest men he has ever been around and noted the intense, competitive nature of mini-camp. Joe Silva, who works with various ministries, including Legacy Minded Men and Michael Franzese Ministries, was a teammate of Szott’s at Clifton High School. Silva, a running back, benefited from the blocking of Szott and other talented linemen on that team. The Bergen County Chapter of the New Canaan Society meets on Friday mornings at 6:30 a.m. at the Brick House (no meetings in August). For more information, visit www.newcanaansociety.org/bergencounty.