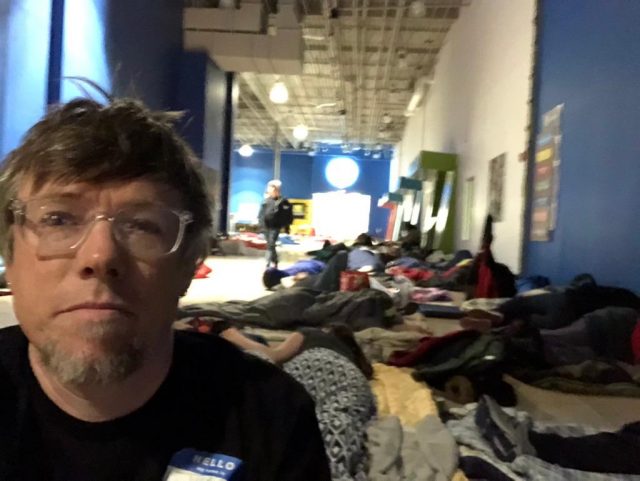 I awoke up at 1:30 a.m. in a parking lot. The pouring rain was starting to drench my sleeping bag as I lay inside of a cardboard box. I had to find a new place to sleep and fast! This was going to be a long night. Read on to find out how I got myself into this uncomfortable predicament…

Have you ever read one of the most bewildering stories in the Bible about a man who amazed Jesus? It’s one of those head scratching scenarios where the “bad guy” became the hero. No one could have seen this coming.

Take a look at this story through a paraphrase I wrote many years ago in a book titled, The Street Bible:

Jesus went to Capernaum and an officer in the Roman army came by. The officer said, “Chief, one of my favorite employees is in critical condition. He can’t move and he’s in a lot of pain.”

The officer retorted, “Chief, I’m not worthy for you to come to my place. Besides, you could just heal him long distance from where you stand. When I tell my soldiers to jump, they ask, ‘HOW HIGH, SIR!?’ My men respond instantly and know better than to mess with the boss. It’s the same way with you and anyone’s sickness. That sickness just doesn’t stand a chance. You the man.”

Now it was Jesus’ turn to have his mind blown. He said to everybody standing around, “This is the only person I’ve met who really believes there are no limits to My power and abilities! A lot of religious folks who should be believers like this guy just aren’t. When they die, they’ll try to get a spot with their crowd, but will be surprised by getting the boot instead.”

He told the officer, “You asked for it, you got it.” Sure enough, his employee was healed right when Jesus said that.

In this narrative, a man who should have been an enemy, an oppressor and religiously repugnant (unclean according to Jewish law) turned out to be the role model who Jesus affirms as having more faith than anyone in Israel. Say what?! This was the modern-day equivalent of pointing out the astounding spiritual walk of a member of ISIS. It was highly offensive and broke every political, religious and cultural rule there was at the time.

The man in question was a Roman centurion in charge of 100 men. He received high praise indeed for someone who was a foreigner hated by the Israelites and a member of the brutal occupying force dominating Jesus’ people. It’s easy to distance ourselves from the story and miss the outrageous audacity of the centurion and of Jesus in this situation. We would be wrong to imagine that Jesus is just speaking in hyperbole and maybe overstating his assessment of the Roman. On the contrary, I believe that Jesus is still pointing us to this anti-hero today so that we might follow in his footsteps.

What would cause Jesus to make such an outlandishly grandiose assessment of the centurion’s spiritual strength? I think it’s not just how he believed Jesus could heal, but the heart motivating him to ask Jesus to heal in the first place.

This Roman’s actions crossed every cultural, socioeconomic and racial boundary that existed at that time in order to connect with Jesus and save his servant’s life. He did this at risk of his reputation and status. Roman rule was all about retaining control through a power structure of dominant authority over their subjects.

As a Roman soldier, he had the power to simply force a Jew to do what he wanted. For example, there was a common practice of “impressment” which allowed a Roman soldier to force a Jewish native to carry his equipment for one Roman mile, about 1,611 yards. This was no small task considering a Roman soldier’s backpack could weigh upwards of 100 pounds.

This was most likely what Jesus was referring to in Matthew 5:41 when he said, “If anyone forces you to go one mile, go with them two miles.” Jesus taught that even if you were unjustly forced to serve a Roman, go above and beyond to serve that person the best you can. That’s what love does. The Roman chose to serve his servant. He went above and beyond for an underling who was powerless and vulnerable. Again, that’s what love does.

By lauding the man, Jesus was welcoming those listening to follow the Roman into a new reality where, “There is neither Jew nor Gentile, neither slave nor free, nor is there male and female, for you are all one in Christ Jesus.” (Galatians 3: 28)

Recently, I participated in an unconventional event with Liquid Church in Parsippany, New Jersey. My two sons and I joined 575 other people in sleeping outside in cardboard boxes in the church parking lot. It was an effort to join in solidarity with those who have no place to call home. Each participant was handed a cardboard box and some duct tape to construct their temporary shelter. Many wrote scriptures on their ramshackle structures like, “For there will never cease to be poor in the land. Therefore, I command you, you shall open wide your hand to you brother, to the needy, and to the poor in your land…” Deuteronomy 15:11. Another person wrote, “Break our hearts with what breaks yours.”

In the middle of the night, the rain poured down on the cardboard city and drenched all of us. We retreated to the church lobby where we sprawled out on the hard, concrete floors. It was difficult, smelly and beautiful as we experienced a little bit of the hardship of others while raising funds and awareness for our brothers and sisters on the streets. It was a tough, but meaningful experience for many of the participants.

One woman commented, “After this, I won’t be looking at people challenged with homelessness in the same way. Though I had sympathy for them before, I now have empathy too. I will make an effort to look them in their eyes and let them know I see them and I will try to do what I can to help them.” Another participant noted, “Such a great event. It’s changed my perspective on who is homeless. I thought they had a choice. Now it doesn’t matter why they are homeless — it only matters how I help. No judgement!”

It took getting into a literal box for the participants to get “out of the box” of how they viewed people living on the streets.

I love my job as president of New York City Relief, a mobile outreach to people struggling with homelessness. I get to encourage people to come and treat others like gold, who many times get treated like garbage. Volunteers are stunned to meet Jesus through people who have been stigmatized and stereotyped as dangerous and to be avoided. On the contrary, when volunteers make friends with people living on the streets, the faulty social constructs crumble revealing a God who embraces everyone equally. It can be shocking to folks on both sides as common ground and genuine affection is discovered. Love melts judgment away as hearts intertwine (story continues after photo). 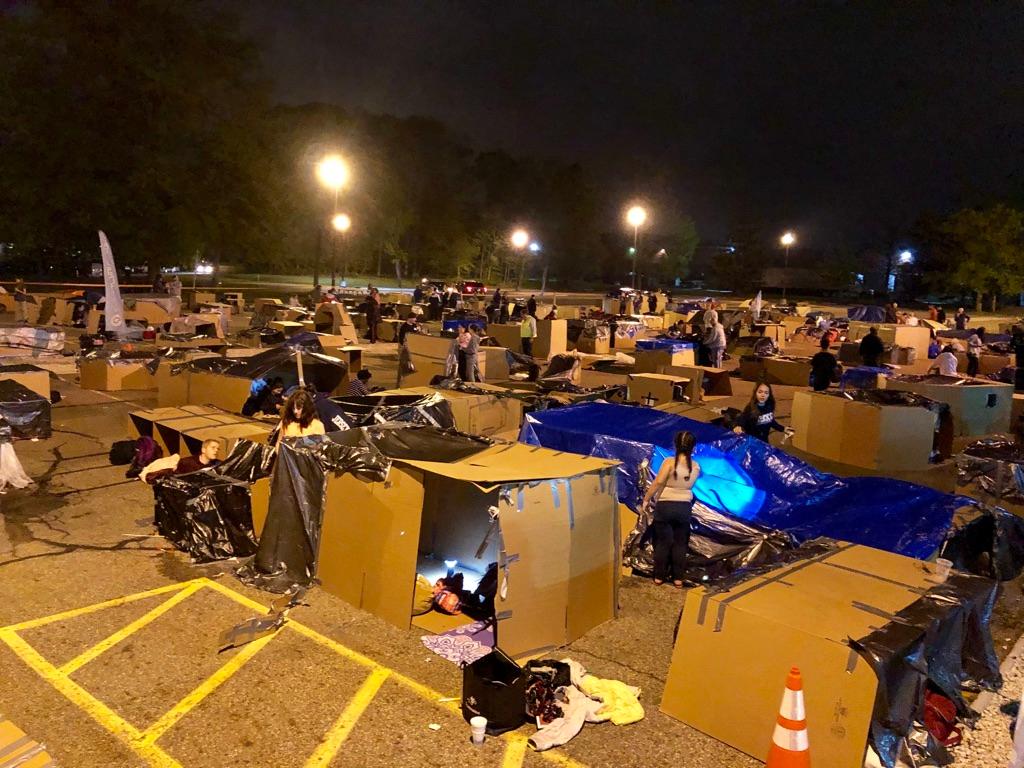 Are there any cultural, socioeconomic or racial boundaries that you need to cross in order to encounter the power of God? If you want to be a part of making miracles happen like the centurion did, this might be your ticket. Are you ready to step deep into the lives of others who are different than you in almost every way? This is the way of great men and women of faith. Love compels them to get in the box with people in crisis.

Why was Jesus so greatly impressed by the centurion’s request for help? One clue is found in James 4:3, “When you ask, you do not receive, because you ask with wrong motives, that you may spend what you get on your pleasures.”

The centurion rightly ascertained Jesus’ authority, because his heart’s desire was not to advance or profit himself in any way. The Roman walked in the Spirit as he embodied the greatest commandment, to love his neighbor as himself. This was a man of war trained in the ways of an empire that ruled with an iron fist, but the conqueror had been conquered by God’s love. This unbelievable love that he received gave him the unwavering confidence that Jesus could heal anyone, anytime.

Two thousand years ago, this centurion understood and embodied a truth that many of us struggle with today in the 21st century:

“Those of us who are strong and able in the faith need to step in and lend a hand to those who falter, and not just do what is most convenient for us. Strength is for service, not status. Each one of us needs to look after the good of the people around us, asking ourselves, “How can I help?””

The Kingdom of God was being manifested in this sacred moment. Jesus took advantage of the opportunity to point out this outsider as being one of the holiest men in the country. It’s hard to emphasize just how outrageous and scandalous this would have sounded to the listeners.

Through this true story, Jesus welcomes us to embrace one of our main purposes on the earth: to serve God by serving others, especially the weak. Like the centurion, will we lay down our wealth, power and position for the sake of the broken?

It’s time to get in the box like Jesus did when he left heaven and came to earth to be with people in trouble like us. It’s uncomfortable and maybe soggy, but this is where transformation happens. Ironically, this is how we can get “out of the box” of our self-absorption and small thinking to become the people God designed us to be. Bring on the cardboard and duct tape!

Juan Galloway is President and CEO of New York City Relief. This year, NYCR is celebrating 30 years of “Making Space at the Table” for our friends on the streets. Find out how you can get involved at newyorkcityrelief.org. 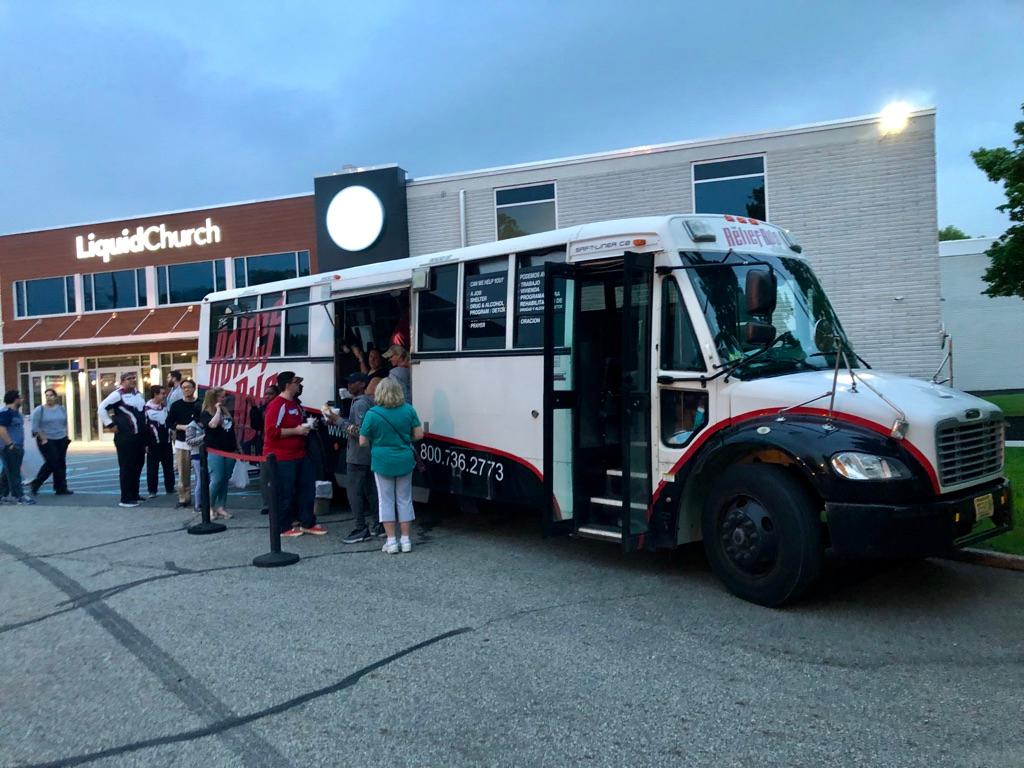