Bethany Christian Services, a faith-based organization serving vulnerable children in the U.S. and around the world, recently announced a partnership with The Steve and Marjorie Harvey Foundation, including The Steve Harvey Mentoring Program for Young Men (SHMP).

“Bethany is uniquely aligned with The Steve and Marjorie Harvey Foundation’s mission to provide outreach to children and young adults who don’t have engaged fathers,” said Chris Palusky, president of Bethany Christian Services. “Our role is often to step in and provide care for the immediate needs of children, through foster families, when they need it most. We are so grateful to partner with organizations like the Harvey Foundation, which is committed to developing young men and women into leaders and empowering them to dream big, no matter where their stories started.”

Bethany connected young men in their foster care and adoption programs with the Steve Harvey Mentoring Program (SHMP) this year. These Mentoring Camps are interactive programs that include a host of workshops that focus on manhood, personal responsibility, dream building, and the importance of nutrition and physical fitness. In addition, the participants are introduced to positive male role models who are leaders in various areas including business, their communities, entertainment and the military.

“Our camp gets young men from single mom heads of households out of the urban, inner-city surroundings that they’re used to,” said Steve Harvey. “That means they get to learn in a new setting. We teach them how to be men. To make eye contact, to honor women, respect the law, support their future families, be studious and be successful. These things aren’t usually taught to young boys without a Male Mentor or a father in their lives. A young man without a father in his life, has a hole in their heart the size of their father. On this weekend, we do the best we can, to fill that hole!” (story contunues after photo) 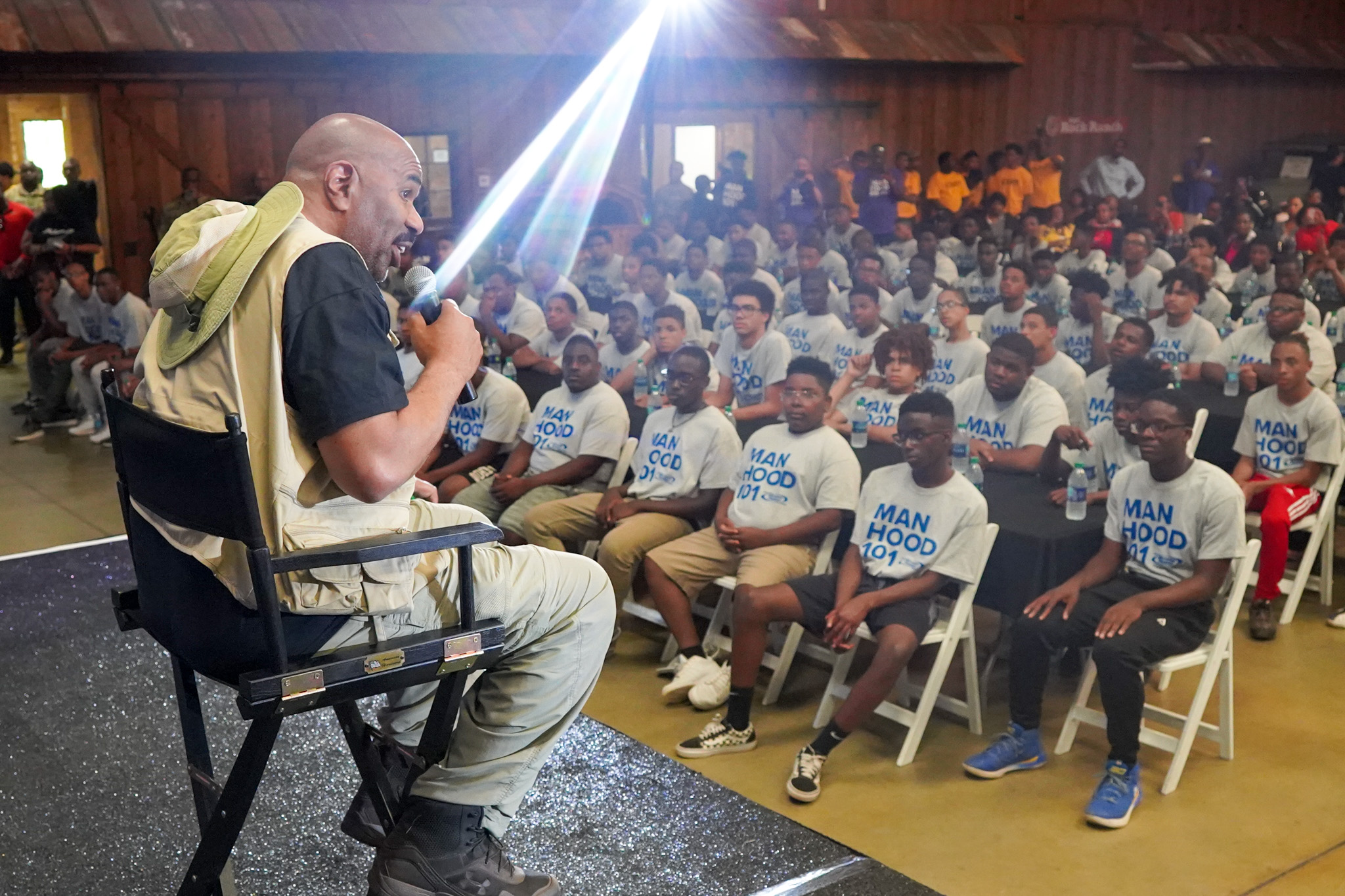 More than one in every four children in the United States are growing up without an engaged father in their home, according to the U.S. Census Bureau. At the same time, the National Fatherhood Initiative has found that children without father figures are four times more likely to live in poverty and are two times more likely to drop out of high school, while being at greater risk for crime, obesity, substance abuse and teen pregnancy.

The Harvey Foundation realizes these odds are often multiplied in the case of young men without engaged fathers. The SHMP has a mission to share, teach and demonstrate positive examples of manhood to young men, enabling them to achieve their dreams and become men who are strong, responsible and productive.

“We are honored to be one small part of the lives of young men in foster care,” said Palusky. “But we also pray over these kids, that they be the ones to end the cycle of fatherlessness in their families. We believe that mentorship and positive role models for young men are essential and that is exactly what the Harvey Foundation is offering.

“We’re in a crisis. These young men need to see other men who look like them leading in fields of tech and STEM,” continued Harvey. “That’s the game changer for so many. Getting inspired by leaders they really want to follow.”

In addition to the mentorship camp for boys, which took place over Father’s Day weekend, The Harvey Foundation will host mothers in Atlanta at the Single Mother’s Enrichment Summit to invest in them and provide 8 key principles of success needed in raising a young man.

Bethany Christian Services, with a local office in Fair Lawn, NJ, is a global nonprofit that supports children and families with world-class social services, all designed to help families thrive. Over 75 years ago, Bethany began its work by serving a single child. Today, the organization works in more than 30 states and more than a dozen countries worldwide, serving more than 50,000 people every year.