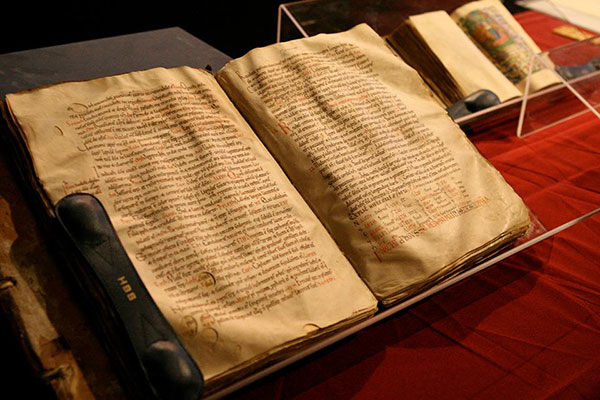 When Ezra went to an exhibition of the Historical Bible Society, he expected to see some interesting historical Bibles and Christian texts. But after hearing Dan Buttafuoco’s presentation on the reliability of the scriptures and seeing for himself how the Word of God has not changed over time, the Bible came alive for him in an entirely new way.

The Historical Bible Society is a collection of historical Christian texts, many of which are manuscripts and predate the Gutenberg printing press. The collection is owned by Dan Buttafuoco, a lawyer who believes that if the Bible really is true, then the evidence has to stack up in a courtroom. He began collecting the documents in Europe and the United States in the 1990 as a personal hobby. As the collection grew and people saw it for themselves, he realized that he had in his possession evidence for the reliability of scriptures.

Today, the Historical Bible Society is one of the only traveling Bible museums in the world. When Ezra listened to Buttafuoco’s presentation, he was intrigued to hear that yes, there were some minor errors in the translation and transfer of the text. A monk may have accidentally not dotted every “i” and crossed every “t,” so there are some very, very minor variations across the historical copies of the Bible. However, the message itself remained completely unchanged. The documents in the collection confirmed that despite minute discrepancies, which are to be expected in hand-copied texts, scribes who transmitted the Word of God remained true to the original message.

After seeing the collection several years ago, Ezra was excited to learn that it would be exhibited again, this time near his home in New Jersey. He had recently read Buttafuoco’s book, Consider the Evidence, and wanted to hear him speak again on the reliability of the Bible. The casual yet professional presentation on the historicity and reliability of the Bible, coupled with the opportunity to see the texts again, left Ezra with a strong impression of authenticity. “It invigorates your faith,” he said. “I’ve now gotten some tools, talking points, and information that I can use if someone ever questions the validity or the reliability of the Bible as the Word of God.”

Ezra has used what he learned from the Historical Bible Society to talk with other people about the Bible. Having seen with his own eyes that the Bible can be trusted, he feels empowered to share its truths with others.

Do you want to learn more about the Historical Bible Society? Visit us at www.historicalbiblesociety.org.

Have you seen the collection and want to share your experiences or pictures with us? Send us a message at info@historicalbiblesociety.org.