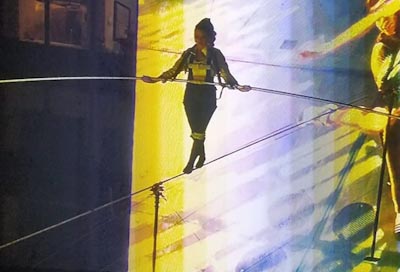 A brother and sister tandem from the Flying Wallendas stepped out in faith, literally, on a high-wire some 250 feet above Times Square.

On Sunday evening, June 24, Nik Wallenda and his sister Lijana Wallenda—with a New Year’s eve-type crowd below and before a live, national television audience—walked on a three-quarter inch wire between two skyscrapers over a quarter-mile apart.

Before the daring fete, Pastor Joel Osteen prayed for them, asking for angelic protection and God’s blessing. The circus performers’ Christian faith was apparent throughout the made-for-TV event, with exclamations and worship songs that added a big tent revival feel amidst the colorful, glowing LED lights.

According to CBS News, the Flying Wallendas, also known as the Great Wallendas, “trace their fearless roots to 1780 Austria-Hungary, when ancestors traveled as a band of acrobats, aerialists, jugglers, animal trainers and trapeze artists.” 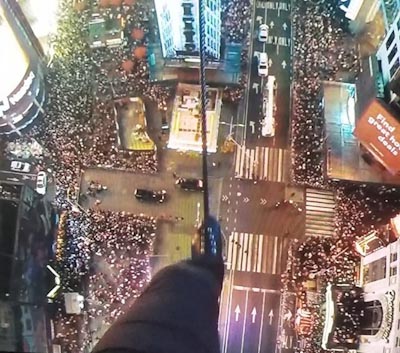 Starting on opposite ends of the wire above Times Square, the brother and sister each used balancing poles as they neared the crucial crossover point in the middle where Lijana would sit on the wire and Nik carefully stepped over. Despite the need for immense concentration, the Wallendas communicated with each other and their father (in a control room) through headsets. The dialogue was also wired to the live broadcast and Lijana boldly declared phrases such as “Thank you, Jesus” “Glory to you, Lord” and “Hallelujah!” as she inched across the night sky.

Overcoming fear was a key theme throughout the evening. Nik Wallenda, 40, said they wanted to encourage people to attempt great things and get out of their comfort zones. After he finished his tightrope walk, he rushed down to the street and was driven to the opposite building so he could greet his sister and  ensure she safely landed.

Lijana kept calm by praying for the “peace that passes understanding” and by singing contemporary and classic worship songs such as “You Make Me Brave,” “No Longer Slaves (to fear) and “It is well with my soul.”

Despite a devastating high-wire fall that left her badly injured two-and-a-half years ago, she was determined to prove to herself and the audience the importance of “pushing past fear.”

“You have overcome so much just to get to this point,” Nik said to his sister.

“Only by the grace of God. I am so thankful,” she said.

As she completed her final steps, which were up an incline, 41-year old Lijana stated, “That fear is gone. Fear will not conquer me.”

Moments later, the family was reunited as the brother and sister hugged their mother and expressed joy, relief, and satisfaction. Then Nik revealed his next mission: walking on a wire across a live volcano.