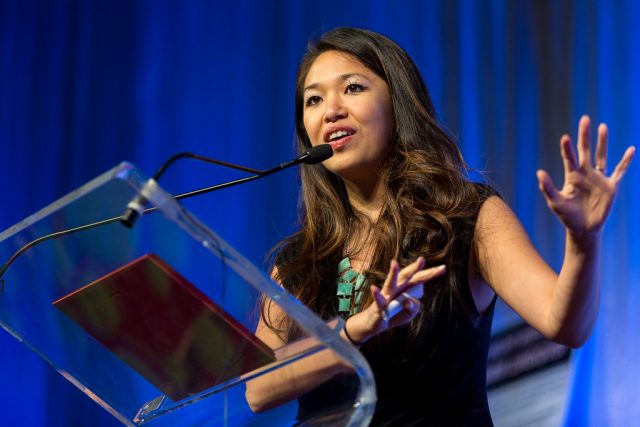 A Columbia University alumna is proving that a business model that uplifts those who feel unworthy and overlooked can operate sustainably at the intersection of compassion, good food, and God’s love.

“Think of the worst thing you’ve ever done in your life and being forever known for that,” says April TamSmith, as she explains why P.S. Kitchen, the restaurant she founded in Manhattan, gives those marginalized by their past a new beginning. The people who Smith has chosen to serve and rehabilitate are often treated like afterthoughts, but P.S. Kitchen wants to make them feel valued as they are in God’s sight.

P.S. Kitchen seeks to address that by donating 100% of their profits to charity; having a strong focus to hire those who need a second chance; and serving delicious food options that are kind to the body and the earth.

Oprah and Gayle visited PS Kitchen and enjoyed every minute of it!

Radical generosity has been at the core of Smith’s beliefs since she was a kid growing up  in Hong Kong. But it wasn’t until her first missions trip to South Africa in her mid-twenties that her Christian faith moved to the forefront of her vision for the future. Her volunteer work with HIV positive children in an orphanage in Durban made her realize that feelings and ideas are empty without action to match.

“We pray a lot of prayers of gratitude, but imagine if the disciples were grateful for the fish and loaves, but then just held onto them. That wouldn’t have been a miracle,” said Smith, Columbia MBA ’09. “God really honors it when you take the leap of faith and obey Him.”

Navigating the unique calling God has placed on her life wasn’t easy. Smith was finding her footing at a New York City top-tier investment firm when she felt the pull towards something more. She struggled with whether she should leave her career in finance to focus on ministry full time until a friend challenged her to consider, what if the trading floor is your calling?

On a return trip to Haiti, while wrestling with how to integrate her skill and training in finance with her heart for people, Smith was struck with how, in that very moment outside the orphanage in Creve, she was being intentional with all of her resources. She realized she was, “giving on purpose,” and she had a vivid image of how her day job could be leveraged to provide the resources to launch a business that would make a difference in the lives of many–the idea that would one day become P.S. Kitchen.

“[Work] became a nurturing cycle instead of a vicious cycle,” she said.

God aligned many seemingly insignificant moments to prepare Smith for her role as co-founder of P.S. Kitchen.

A year before Smith even had the idea for P.S. Kitchen, she was in the market for a temporary roommate. And that person turned out to be a restaurant owner who was looking for ways to find more fulfillment in his work. There was no sudden light bulb or voice from the heavens explaining that this connection would be important down the line, but that roommate was instrumental in helping her start the restaurant.

After two years of perseverance and trusting that God would make a way to manifest the vision He had planted in her, the restaurant became reality, opening its doors in August of 2017. The vegan establishment is located on West 48th Street in the “Hell’s Kitchen” section of Manhattan.

Since the launch of P.S. Kitchen, Smith has had a lot of opportunities to share her view of generosity, that we are all called to live in ways that are others-centered. Co-workers cannot help but notice that she strives for a standard of giving, not a standard of living.

“When we live authentic lives in and out of the office” Smith explains, “it’s impossible for our faith not to come up in conversations.” A quote from a sermon at a Generous Giving conference that has sharpened her understanding of how her faith should operate in her daily life: “Christians ought to live in such a way that is so confusing that it demands an explanation and the only explanation is the Gospel.” When this is the goal, it makes sense to dedicate your life to loving “the least of these” as Jesus calls us to do in Matthew 25.

Smith’s hope for P.S. Kitchen is that diners will be moved by the restaurant’s unique approach, and that they will consider how they might also shift gears, find their own way to make the world’s “afterthoughts” a priority and experience the joy of living others-centered lives.