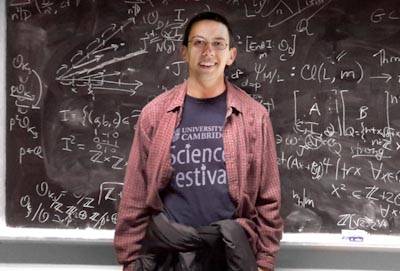 Princeton mathematics student Evan O’Dorney’s accomplishments are nothing short of extraordinary. Yet, even with his many feats, he gives all glory to God. A trailblazer among the next generation of mathematicians, O’Dorney credits his Catholic faith as the source of his exceptional work ethic.

To O’Dorney, there is a sense that math is necessary: since the starting assumptions that ground mathematics have not been proven to be consistent, they must be taken on faith. “Maybe this means there is a sense of ‘math as God’s language’…” he speculates. While some in academia might paint the STEM fields as antagonistic to faith, he has acquired a greater appreciation of the God-given world around him precisely because of his course of study. O’Dorney even thinks that math might help one’s contemplation of what is possible with God in heaven. “One thing math can do is fuel our imaginations,” he mentioned. “You can imagine a being that can actually do infinite operations and can solve problems that no human can.”

At Princeton, O’Dorney is primarily involved with the Aquinas Institute, the university’s Catholic campus ministry. Within Aquinas, the students share his values and can discuss world issues with him from a faith perspective. Since coming to Princeton, he has gained a new appreciation for Christian community. He welcomes the inspiration and encouragement that he receives from his fellow Catholics, especially given the challenges that come with his course of study. As an introvert, he especially appreciates the chattier personalities within the group that keep the conversation going.

O’Dorney also enjoys his individual devotions and practices. As part of his daily routine, he prays alone or with a buddy, and reads the Bible alongside a devotional book. He also finds it useful to journal and pray each morning and night. Although it is difficult to keep his devotions amid a busy and often unpredictable schedule, he holds firm. “I know that there are plenty of other Christians around the world that are subject to time pressure,” he said, “so I can pray in union with them.”

Outside of the mathematics realm, O’Dorney is captivated by the world of classical music. A composer, he cites Bach and Beethoven as some of his greatest inspirations. Fittingly, his endeavors in music are also closely linked with his faith. “With classical music, you get a sense of progress toward heaven, a sense of things presented as a little bit askew and made right, and a sense of the triumph of truth, represented by the major triad at the end of the piece,” he explained. In addition, O’Dorney often hops on the piano to catch a break from life’s stresses. “All my life, the deeper need has been for peace and calmness,” he declared. “That is almost always the main goal of my musical improvisation.”

As O’Dorney’s research begins to wrap up, his friends are eager to see how he can continue to glorify God in the mathematics community. Still, for him, math is but a foretaste of the splendor ahead in Christ.

“Math,” he said, “is certainly only a tiny fraction of what is true and what exists in the realms that God has created.”