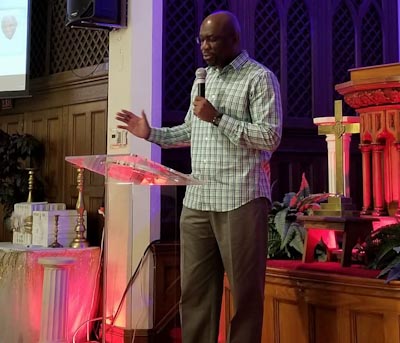 Editor’s note:Pastor Yeathus Johnson​ was recently interviewed by Pastor Fred Provencher​ of Cornerstone Church for “A Conversation about Race: Multiculturalism and How People Change.” He also appeared on a panel, “Uncovering Roots of Injustice,” hosted by King of Kings Worship Center and Pastors Peter Roselle​ and Patricia Roselle​. The links to the interview and panel discussion are at the end of the story.

Ten years ago, Pastor Yeathus Johnson served as the interim pastor for a Spanish church that had just experienced a Ponzi scheme. Church members, along with those in the local community, had lost thousands of dollars.

“People were extremely angry and transferred their anger onto me, since the person who started the Ponzi scheme went to prison and the pastor of the church was removed from the pastorate,” recounted Johnson, a Paterson, NJ resident. “During this time, I would butt heads with a couple of leaders, which seemed like every meeting. Many conversations I had with these leaders ended with us believing we had an understanding, only to find out later that we were on a totally different page [from each other]. What I learned is that although some people can speak English, it doesn’t mean that they think in English, so there may be a gap in understanding.“

The program couldn’t be more timely. “Our society is coiled in tension from racial, ethnic, cultural, and political differences. Whenever you turn on your television or sign into any social media platform, there is rarely a day that goes by where a newsflash isn’t pulling at our emotions from racially, ethnically, politically, or religiously charged incidents,” said Johnson. He adds the facts that: the United States is more diverse today than ever, yet often remains divided along racial, cultural, and political lines.

For the past two years, Johnson has been conducting one-hour seminars at churches, ministries, businesses, and non-profit organizations around the country to “pursue competencies and skills that will break down the racial walls of separation, the ‘us vs. them’ mentality, the division, and ambivalence toward cultural diversity.” One-day workshops, 2-day workshops, and 3-day retreats are also offered for more intense training and growth.

“One of the biggest challenges I have currently is getting leaders of the dominant majority culture and those within ‘closed cultures’ to buy into the training,” he said. “Many feel it’s a nice thing to do, but many do not see this as a discipleship and spiritual formation tool of the church. Church leaders fail to realize that most of their people work in diverse work environments, and CQ, Diversity Awareness, and Inclusion training will prepare their congregants better to become Third Culture disciples who are equipped to develop cross-cultural relationships that can lead to the expansion of God’s kingdom.”

The church’s role as a champion for racial healing in our country and beyond is key. “We must lead with a biblical and missiological foundation for cultural intelligence,” said Johnson. “John 3:16 indicates that God so loved the world, humans, that He sent His only Begotten Son to reconcile them to Himself and each other. Here are the words of Jesus in John 20:21: ‘Peace be with you! As the Father has sent me, I am sending you.’ God the Father so loved the nations that He sent His only Begotten Son and is now sending us, the church, in love. Unity begins with the church expressing the Gospel in tangible and loving ways. Love is a universal language.”

And that language has served Yeathus Johnson well in his work overseeing urban churches. “In my role as an overseer and consultant of urban churches in the Christian & Missionary Alliance, I work with Spanish, Chinese, Korean, Thai, Caribbean, African-American, Haitian, West African, Ethiopian, Guyanese, Indian, Arabic, Jewish, and Russian leaders and churches, so I am bound to make mistakes,” said Johnson. “However, I lean into a cross-cultural relationship in the posture of love. When [I do that], my success rate working interculturally is much higher. “

Though challenges are inevitable, the fruit that comes from increased cross-cultural understanding and love is encouraging. “My biggest victories have come from working with churches in deep conflict when I became their interim pastor or when I had to invest considerable time at the church to resolve a major leadership conflict,” he said. “Even though, ‘no hablo Español’ and ‘Mwen pa parle Kreyol,’ my ability by the grace of God to apply CQ competencies has been key to my success. There are four competencies that are thematic throughout my training, which energizes the sessions; they are CQ Drive, CQ Knowledge, CQ Strategy, and CQ Action.  All four of these competencies are extremely important, but I lead with drive.  What fuels that drive?—LOVE!”

Join us for Pastor Fred's honest conversation with Pastor and Christian Leader, Yeathus Johnson, about race, faith, and God’s call to live as a third-culture person. Topics discussed will include: listening, learning and the importance of love in this crucial moment in our nation's history. For a direct link to the video please click on the link below:https://vimeo.com/426034587

Uncovering Roots of Injustice (Psalm 133:3)Panel Discussion Led by Carolyn McCombsThe leadership of King of Kings is committed to helping our community see the relevance of Jesus Christ as the ultimate source of strength and hope as we grapple with the hellish issue of racism. Carolyn McCombs is an anointed minister, an elder at King of Kings and the founder of “New Destiny Family Success Center,” in Paterson, NJ. Carolyn will help facilitate a panel discussion with guests from different segments of society. Our goal is to uncover the roots of injustice that allow racism to continue. Understanding root causes can help us identify the best path forward to engage our culture in ways that will create lasting change and help us all live lives that reflect the truth that every human being is created in the image of God and entitled to respect, dignity and acceptance as equal members of our society. We hope you can join us.Be blessed.Remember: you have been “blessed to be a blessing.” (Genesis 12:2)Pay it forward!For more videos, subscribe to King of Kings YouTube Channel here: https://bit.ly/2TRObARIf you need help with a personal problem email info@kingofkingswc.com.We'd like to agree with you in prayer and offer whatever assistance we can provide.Donate to King of Kings here: http://www.kingofkingswc.com/donate/

Posted by King of Kings Worship Center on Wednesday, June 10, 2020