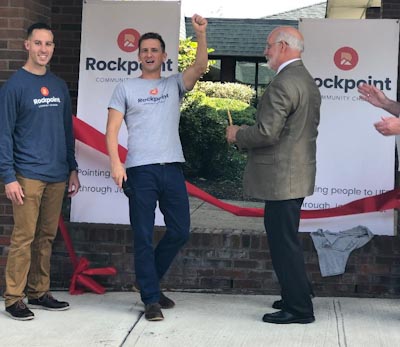 It’s a church with a new name, a revised mission and vision, and contemporary worship—but it still rests securely on the rock, as it has since its founding in 1882.

Jim Bushoven, the church’s senior pastor, ushered in the new era with his message entitled “On the Rock.”

Rock Point’s community is comprised mainly of North Haledon and Hawthorne, as the church is located near the intersection of those towns.

“We are positioned to be a community church for two towns, and beyond that, as the Holy Spirit wishes to help us grow and impact communities.”

“There is a deep, rich history here,” Bushoven said. “There have been decades of influence that have led to this point.”

Bushoven and Dave Lyman, the church associate pastor, said the recent name change reflects a deep desire to impact their community as a warm and friendly, hope-filled church. Additionally, most locals are familiar with the large boulder that sits on the grass adjacent to the parking lot, he said.

“Covenant is a religious word and most people in our community would not be familiar its meaning,” said Lyman. “We also found out that most of the kids in the community call us ‘The Rock Church’ because of the big rock in our yard that many of them have climbed on over the years. Our mission is to point people to Christ and Christ is the rock!”

And that mission is accomplished with four key pillars: Impactful Worship, Growing Young, Praying Unceasingly, and Extending Love to All.

Rock Point Community Church did, in fact, “pray unceasingly” leading up to the recent special service, with a 24-hour prayer vigil.

“We want prayer to become such a major part of our church DNA that it is included in our vision statement,” Bushoven said. “It made sense to launch the new name and mission/vision on the heels of much prayer. I have received multiple messages from people in the church how moving the experience was and, due to the prayers, our launch was better than expected. You still felt the surge of the Spirit’s favor over a week later.”

“Covenant Church has always been a praying church, so it was only natural that we would bring this all to the Lord in prayer as a congregation,” Lyman said. “I also think that the leadership gave a good example to follow, because they have been bathing this entire effort in prayer for many months now.”

An increased emphasis on children’s and youth ministry is also part of the church’s mission. Bushoven recently talked about an influx of young families. He and his wife Amanda are the parents of three young children.

Bushoven previously served on the staff at Hawthorne Gospel Church before coming to Rockpoint over a year ago. Today, the senior pastor is excited about what is happening with his congregation.

“The name change has affected the atmosphere because you cannot deny something new is happening here,” he said. “The important reality to the effectiveness of changing the name is we were already growing and shifting the dynamic of our church life; the name change than became a real extra charge during this time and is further inspiring new people to visit our church. The adventure of Rockpoint has begun. It’s a fun time.

“We are beginning to see people from the community look to this church as their church. We are excited to step up and be a spiritual community center for our neighbors and for anyone looking for life through Jesus Christ.”

#church launch #rockpointccnj #rockpointlife Check out our church #vision for the days ahead.