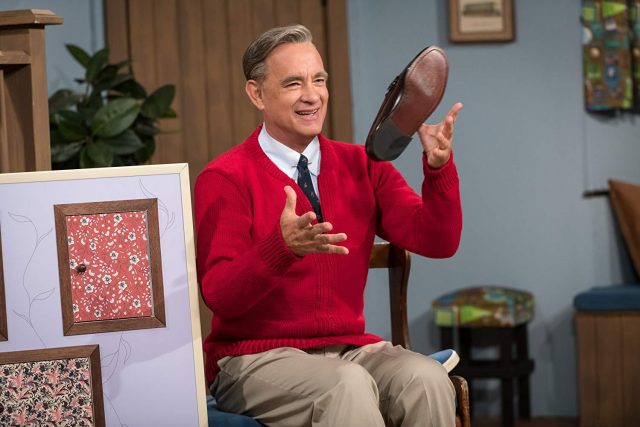 Millions of Americans grew up watching Mister Rogers’ Neighborhood, which aired nationally from 1968 to 2001 and followed Fred Rogers as he educated children about the world and taught them to be kind and compassionate, too.

Unfortunately, though, we’ve forgotten many of the lessons we learned from that popular PBS series. Today’s society is even more cynical, more divided and more hate-filled than it was when Mister Rogers went off the air nearly two decades ago.

The film A Beautiful Day in the Neighborhood opens in theaters Nov. 22, telling the story of an aging Fred Rogers as he befriends an Esquire reporter, Lloyd Vogel, who has been assigned to interview the TV personality. Soon, though, it is Mister Rogers who is asking Vogel the questions — about his feelings, about his anger toward his father, and about his lack of forgiveness.

The film was inspired by a true story, although in real life the Esquire reporter’s name was Tom Junod.

The movie depicts Rogers as the same type of person — kind and gentle — on set and behind the scenes. His wife, Joanne Rogers, told me the movie’s depiction of her husband is “absolutely correct.”

Bill Isler agreed. He worked with Fred Rogers and is the former president & CEO of The Fred Rogers Company.

“What you saw is what you got,” Isler told me. “The consistency was unbelievable.”

The movie also depicts Rogers as a man driven by his Christian faith. (We see him kneel beside his bed, praying for people by name.)

Fred Rogers, his wife said, viewed the show as a “ministry” to children.

A Beautiful Day in the Neighborhood teaches us about forgiveness, reconciliation, kindness and compassion. It also includes positive themes on fatherhood and reaching out to others.

It was not rated at press time, although its content is PG-worthy. It includes minor violence (a son punches his father), discussion of death, and a reference to someone “sleeping around.” Language includes: h– (4), OMG (2), d–n (1) and s–t (1). (None of the coarse language is spoken by Fred Rogers.)

The movie may not be fully kid-friendly — yet it contains multiple lessons we adults need to learn.

It’s one of the most inspiring films you’ll ever see.

Disney Plus — Disney’s new streaming service launches Nov. 12 with thousands of movies and television programs from the company’s vast catalogue. That includes titles from Disney but also from Pixar, Marvel, Star Wars, Marvel and National Geographic. Of course, not all of the titles are family-friendly, but with Disney’s pledge not to host R-rated content on the platform, it will have a higher-percentage of G and PG stuff than any other service. This includes dozens of titles — like the Herbie series — from the 1960s and 70s. It’s $6.99 a month. Visit DisneyPlus.com.

‘The Dude Perfect Show’ (Hulu) — It’s a reality and comedy show starring the hilarious quintet who became famous thanks to their addictive YouTube channel. The Dude Perfect Show launched on CMT before moving to Nickelodeon and is now streaming on Hulu. Dude Perfect — for the uninitiated — is “bearded dude” Tyler, “tall dude” Cody, “redheaded dude” Garrett and twins Coby and Cory. They’re hilarious — and they’re also Christians. The first two seasons are streaming on Hulu.

‘Amazing Grace’ (Hulu) — It’s a trip back in time to watch Aretha Franklin record a gospel album live in 1972 at the New Temple Missionary Baptist Church in Watts, Los Angeles. It features a lively choir and some of the best music you’re ever hear. Amazing Grace was nominated for multiple awards and even received high praise from mainstream critics. It’s streaming now on Hulu. Rated G.

Michael Foust has covered the intersection of faith and entertainment more than 15 years. He is the husband of a wife, Julie, and the father of four small children.