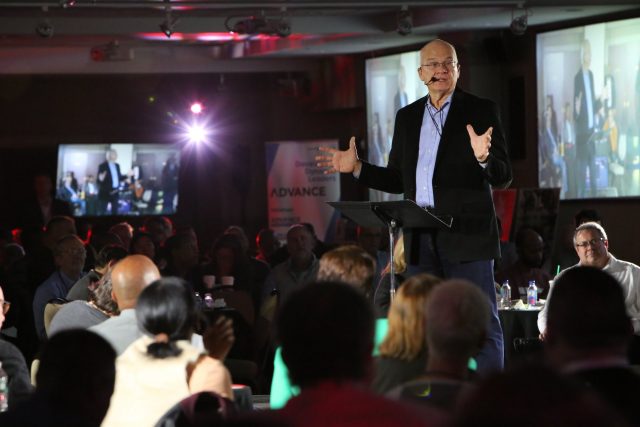 At Movement Day New York City, 400 influential pastors, ministry leaders, and marketplace professionals knelt in prayer, rolled up their sleeves, and spent a day seeking ways to “move” the needle when it comes to impacting this region with the gospel.

They worshipped, heard messages from the likes of Tim Keller, Carter Conlon, and A.R. Bernard, and even enjoyed a good laugh with the comedy of Michael Jr. Some of the key themes were Reaching and Raising up the Next Generation, Serving and Loving the Marginalized, collaboration within the Body of Christ, social justice, and generosity. (story continues after ad)

“What we can do together is greater than what one organization can do on its own,” said Adam Durso, executive director of LEAD NYC, the host organization of Movement Day.

Dr. Mac Pier, founder of Movement.org, came to New York City as a missionary 35 years ago and launched Concerts of Prayer Greater New York. He said what happened at Movement Day NYC in October would have worldwide implications; The data and best-practices learned will be shared at Movement Day 2020 when 1,500 leaders from 400 cities across the world are expected to converge in New York.

“Would we be willing to ask God collectively to impact the metro region over the next 10 years?” Pier asked the Movement Day attendees. “It’s important to the globe. New York City has always been the epicenter of spiritual awakening. Leaders across the world want to know what God is doing here.”

Pastor Carter Conlon, senior pastor at Times Square Church, spoke about the power of unity (Psalm 139) and how we need to be this generation’s “upper room.”

“Incredible potential exists in this moment of time,” said Pastor Conlon. “If we succeed in becoming the unified body of Jesus Christ—that’s where the power of God is found. A bitterly divided society needs to see another spirit. There is division everywhere. God, give us the grace to be like the early church in Acts 2. God came and empowered them to do things they could not do in their own strength…When we choose to walk together in unity, the anointing of God sets us apart from this world.”

Tim Keller, renowned author and founding pastor of Redeemer Presbyterian Church in Manhattan, also spoke about the need for unity, saying the church was like an ecosystem with various denominations and congregations performing necessary functions.

“A city can only be reached with the gospel if there is a whole movement of churches and denominations all coming together to do their part,” he said. “It takes a unity that only comes from the gospel. Jesus said it takes everybody. 1 Corinthians 3:6 says, ‘I planted the seed, Apollos watered, but God gave the increase.’ The more unity we experience, develop, and build here in New York City, the stronger our witness will be.”

The gospel is the only answer to overcoming race- and class-consciousness and over-denominationalism, Keller said. He noted how James 1:9 evens the playing field, “Let the lowly brother boast in his exaltation, and the rich in his humiliation, because like a flower of the grass] he will pass away…”

“Christian identity is unique in the world,” Keller said. “Everything else is based on performance, career, race, and how good you are. The gospel says, ‘you are a lost sinner, but you are as utterly loved by God.” (story continues after photo)

One way the church in New York is coming together is by seeking to help the city’s most vulnerable residents with its 10 Zip Code Project. LEAD NYC is collaborating with the Cinnamon Network to measure and support the collective social impact of the church in ten of the poorest/neediest communities and help break the cycle of poverty. The results of the first two case-studies in Washington Heights and East New York were released at Movement Day.

“We are seeing the tangible love of Christ demonstrated,” said Adam Durso. “We are moving the needle.”

Along that same theme of impacting New York’s poor, Jennifer Jones-Austin exhorted the church leaders to do more in their communities. Jones Austin is Chief Executive Officer and Executive Director of the Federation of Protestant Welfare Agencies, an anti-poverty, policy and advocacy organization with 170 member human services agencies operating throughout New York City.

“Where is the church in the midst of social decay?” she asked.

“One of the key reasons our communities are struggling is that the church as an institution has seemingly forgot a core element of its responsibility—to take care of the community at large. I’m constantly confronted with this question: ‘Where is the church when it comes to the issues of jobs, housing, crime, and violence?’ I, too, have asked these questions.”

With a heart to help former inmates, victims of trafficking, and other marginalized people, April Tam Smith stepped out in faith and co-founded P.S. Kitchen in Manhattan over two years ago. Smith, a managing director in Equity Derivatives at a top-tier investment firm, told her story at Movement Day. Her restaurant is unique in that it hires people who need a second chance in life and donates all its profits to charity.

Smith has become a generosity consultant on the trading floor as co-workers cannot help but notice that she strives for a standard of giving, not a standard of living.

“God does not need our money or time,” she said. “He is inviting us on this journey to enjoy the joy and freedom of giving.. ….living a generous lifestyle is contagious.”

Smith also was part of a panel discussion on generosity, along with Wanji Walcott, Chief Legal Officer & General Counsel at Discover; Pat Gelsinger, CEO of VMware, and Brian Jacks, CEO of WiConnect and marketplace pastor at Christ Church.

Gelsinger is known for giving away half of his salary to missions and charitable causes each year. According to wallmine.com, his total annual compensation package is close to $18 million.

Gelsinger said he and his wife decided to increase their giving by one percent each year about 30 years ago.

“Every year we try to be more generous,” he said.

“We have a high calling to be good stewards,” Doll said. “God has given us 24 hours in a day, financial resources, a body. What are you doing with what God has given to you? To whom much is given, much is required. God has given everything for you.” (story continues after photo)

Josh Crossman, CEO & Director of Pinetops Foundation, told Movement Day attendees about The Great Opportunity, an independent report on reaching the next generation. The Pinetops report estimates that over 40 million young people who were raised in Christian homes could walk away from the faith by 2050.

Crossman explained how the percentage of those leaving the faith has increased dramatically over the last decade. But the good news, he said, is that it can be reversed by restructuring our priorities in reaching young people and planting more churches.

“If we can help them engage at rates from just two decades ago “over 20 million can know a life with Him. That would be greater than all the revivals in American History.”

Dr. A.R. Bernard, senior pastor at Christian Cultural Center in Brooklyn, closed out Movement Day by challenging the leaders to seek a social ethic in addition to focusing on the conversion of souls. We are to seek the peace and prosperity of the city, according to Jeremiah 29:7.

“It’s been wonderful to see all the information and this collection of people (at Movement Day),” he said. “It’s been inspiring. I’ve had 41 years of ministry in New York City. I have seen some things and learned some things.”

Dr. Bernard said the church must work for social reformation, and look to combat racism and classism in culture. In his message, he pointed to good and bad historical examples of how the White evangelical church responded to racism in society.

“It’s 2019, but in some ways, the racial divide is just as deep now as it was 150 years ago,” he said. “We have a responsibility to challenge the status quo and make a difference.”

“We should have the prophetic insight necessary to respond. As Christians, we elect to serve God, but we also must make sure that God is served by the world in which we live. We must hold that world accountable to values that transcend religion—values that were established divinely by God. Our social ethic must not be tainted by bad theology and poor hermeneutics.” 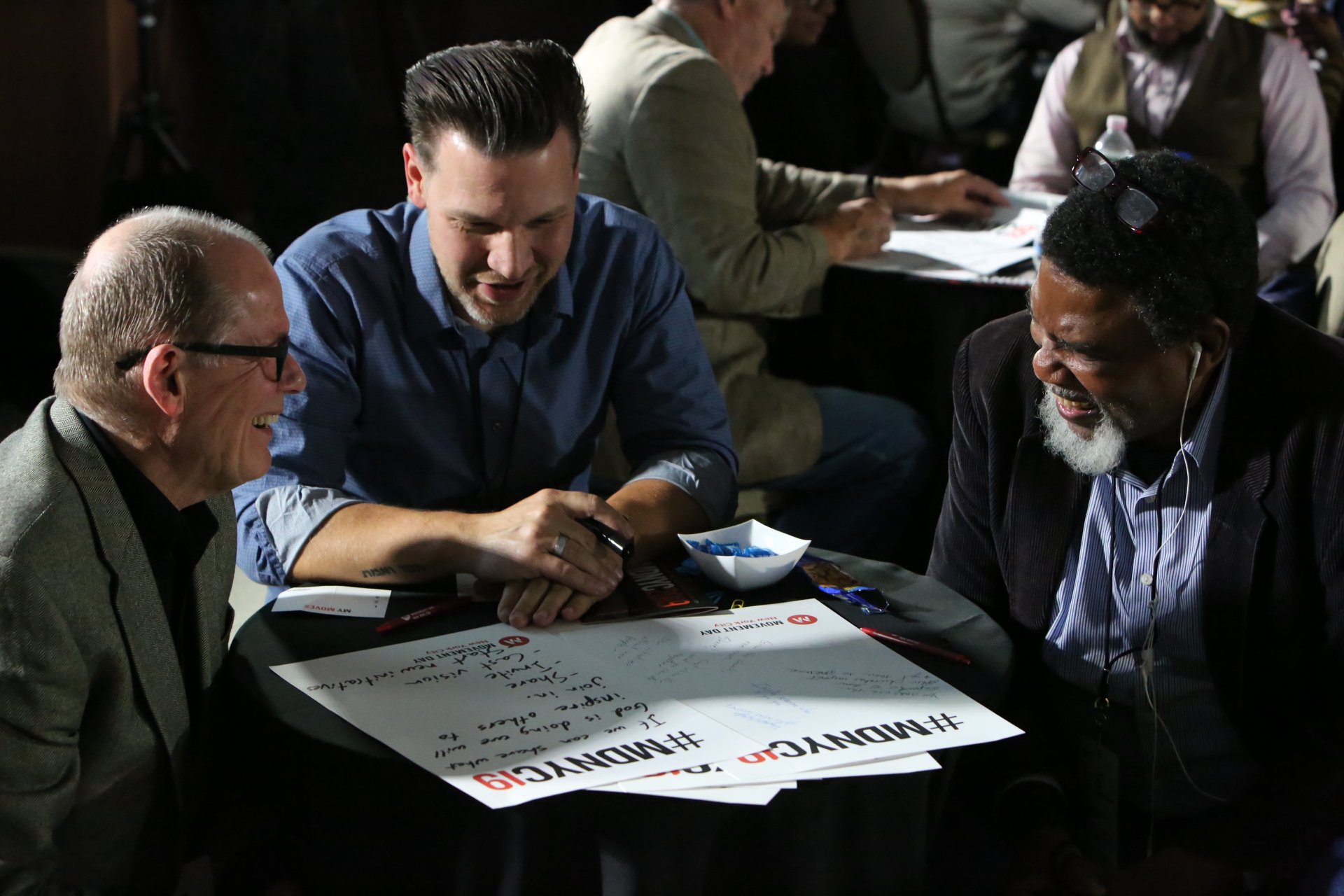