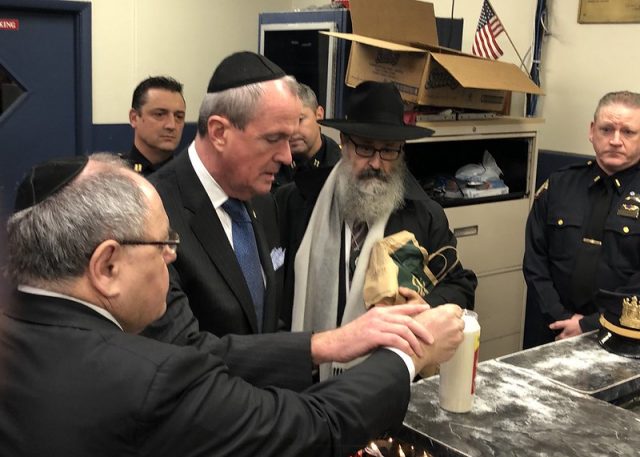 Two prominent Jersey City pastors asked for prayer for their community via social media in the wake of Tuesday’s fatal shootings that left a veteran policeman and three innocent civilians dead.

At approximately 12:30 p.m., Jersey City police Detective Joseph Seals, 40, was shot to death in Bayview Cemetery after encountering two subjects in a van that was linked to a homicide in Bayonne (as reported by Officer Down Memorial Page).

According to nj.com, the attackers then drove a van to the J.C Kosher Supermarket on Martin Luther King Drive, where they killed three other people and launched a gun battle with police that lasted for about three-and-a-half hours.

“The violence placed New Jersey’s second-largest city on lockdown for hours as streets were blocked, buildings were sealed and thousands of children were ordered to shelter-in-place at their schools,” nj.com reported.

The alleged shooters were killed in a shootout with police.

Earlier, during the standoff, three people were killed in the store, while one was able to escape. The deceased included two members of the Jewish Orthodox community,  Leah Minda Ferencz, 33, and Moshe Deutsch, 24; and Miguel Jason Rodriguez, 49, an immigrant from Ecuador. NJ.com reported that Ferencz co-owned the store with her husband, while Rodriguez was working at the market to support his family.

“Please pray for our city, Jersey City,” Rev. Joshua Rodriguez, Sr.,  pastor of CityLine Church, wrote in a Facebook Post. “Pray for the families and friends of all those who lost their lives today. Please pray for the family of our fallen brother Detective Joseph Seals, for the recovery of our wounded police officers and for the families of our Jewish brothers and sisters whose lives were senselessly taken from them at a kosher market.”

Rodriguez, who has served as police chaplain for the last 13 years, also asked the Facebook community to pray for the city’s school children and teens who were “traumatized” by hours of lockdown in schools. His heart ached for the family of Detective Seals, who was survived by his wife and five children.

“It was truly agonizing to witness the pain and anguish of the family members as they came by to view the slain body of one of our most productive and exemplary police officers,” Rev. Rodriguez said. “We value your prayers for all of the aforementioned.”

Rev. Mario Gonzalez, pastor of Hope Center Tabernacle, quoted  John 15:13 in a Facebook post, “Greater love hath no man than this, that a man lay down his life for his friends.”

“Please remember this local hero’s beloved family in your prayers,” he said. “He leaves behind his wife and five children, giving his life to protect the citizens of our city.”

There has been speculation that the shooters, David Anderson and Francine Graham, targeted the Jewish market in a hate-crime. According to an NBCnewyork.com report, online postings connected to Anderson’s social page revelaed anti-police and anti-Jewish writings.

New Jersey Governor Phil Murphy assured the Jewish Community that state and federal authorities were working to make all communities of faith feel safe and secure.

“We stand in solidarity with the Jewish Community,” Murphy said. “An attack on the Jewish community—in the most diverse state in the United States; in Jersey City or anywhere else—is an attack on all nine million of us.”

Likewise, Sam and Francine Mikhail, Jersey City residents and co-publishers of the website EverythingJerseyCity.com, said anti-Semitism and hate have no place in their city and offered condolences in a Facebook video (below).

“Our prayers are with you,” they said.

The horrific events that took place in our hometown of Jersey City yesterday have certainly shaken many of us to the core. While news sources have mixed details as to what is known of yesterdays tragedy, what we do know is that 6 people died and that there were at least 4 of them that left home not realizing their lives would be cut short. As life long residents and business owners in Jersey City, we are deeply saddened. We love this great city and ALL of it’s people.Our heartfelt condolences and support go out to the families of:Officer Joseph SealsLeah Minda FerenczMoshe Hirsch DeutschMiguel Jason RodriguezOn behalf of my wife and I, our prayers are with you. – Sam & Francine Mikhail ❤️

Posted by Everything Jersey City on Wednesday, December 11, 2019