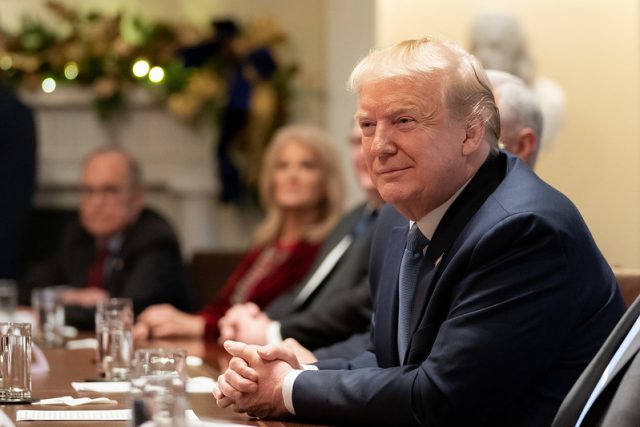 When litigating cases, often one side will make a preliminary motion for summary judgment. They do so when they believe that the court, looking at all the evidence submitted in the light most favorable to the opposing party, would still have to conclude that there are (1) no genuine issues regarding the material facts in the case, and (2) that they would have to rule in favor of the movant and against the opposing party on the basis of the facts presented as a matter of law. Mark Galli’s recent editorial in Christianity Today is essentially an unfounded “public” motion for summary judgment against the current President of the United States.

In order to give any credence to his opinion regarding the removal of the president from office, the reader would have to first accept the premise presented by Mr. Galli that, and I quote, “But the facts in this instance are unambiguous: The president of the United States attempted to use his political power to coerce a foreign leader to harass and discredit one of the president’s political opponents.” As a licensed attorney in New York and New Jersey, practicing in federal, state and immigration court, along with most attorneys who watched the wholly partisan Presidential Impeachment proceeding last week, I would conclude that no facts were presented during the entire proceeding to substantiate Mr. Galli’s claim of no ambiguity. Quite the contrary, in fact.

While the president clearly was unwise in actually naming a political opponent when asking a foreign government to help deal with potential corruption that may have influenced the 2016 election process in the U.S., which hurt the country (obviously not his candidacy since he won), the request was nonetheless, constitutionally, well within the purview of the Executive Branch of our government. And this is the crux of the problem with Mr. Galli’s extremely dangerous assertions and recommendations made in this regrettable article. No facts were established by any witness during the Impeachment proceeding that the president factually sought to “coerce” or otherwise “harass” a foreign leader to discredit Biden for personal, partisan, or political gain. This is either Mark’s mistaken interpretation of the conversation itself, or an imprudent reiteration of popular media talking points. Quoting from the White House’s official transcript of the conversation, here’s what the President actually asked for in the now “infamous” conversation [in relevant part]:

President Trump: “I would like you to do US A FAVOR though, because OUR COUNTRY has been through a lot and Ukraine knows a lot about it. I would like you to find out what happened with this whole situation with Ukraine… I would like to have the Attorney General [referring to Bill Barr] call you or your people and I would like you to get to the bottom of it… Whatever you can do, it’s very important that you do it if that’s possible… The other thing, there’s a lot of talk about Biden’s son, THAT BIDEN STOPPED THE PROSECUTION, and a lot of people want to find out about that so whatever you can do with the attorney general would be great. BIDEN WENT AROUND BRAGGING THAT HE STOPPED THE PROSECUTION, so if you can look into it…”

As should be obvious to the objective reader, at no time does Trump here actually make what can honestly be interpreted as a demand of President Zelenskyy. Not only so, but he couches all of the requests that he makes with three salient phrases, “Would like,” “Whatever you can do,”  and “if that’s possible.” For Galli to conclude that the president’s requests modified by these phrases still constitute coercion [Def: to compel by force, intimidation, or authority, especially without regard for individual desire or volition] is at best a mistake.

Notwithstanding, the personal opinions voiced by the one fact witness at the partisan impeachment proceeding, Ambassador to the European Union Gordon Sondland, managed to testify that the one request expressly made to him by President Trump was, and I again quote, “I want nothing. I want nothing. I want no quid pro quo. Tell Zelenskiyy, President Zelenskiyy to do the right thing.” I and other attorneys would agree with Mr. Mark Galli that “the facts in this instance are unambiguous,” unfortunately they are unambiguous in their lack of support for his assertions and subsequent recommendation in this article.

Beyond this clarification, Mark Galli is sadly misunderstanding what the role of voting is to a citizen-believer. What it is not is an act of worship. Voting for anyone does not, should not, and has never served to convey the voter’s opinion regarding the moral virtue of the person voted for. If this were true, Christians shouldn’t vote in secular elections at all – ever. In truth, men of God have supported ungodly leaders throughout history, helping them to make better decisions and rule over God’s people and the general citizenry at large. Daniel, for example, as well Hananiah, Mishael and Azariah, all served as prominent political leaders under the ungodly king of Babylon, Nebuchadnezzar. Nehemiah under the pagan king Artaxerxes of Persia.

At present, as unpleasant, crass, quick tempered and immoral personally as President Trump might be, he is the single candidate who has governed to defend our Constitutionally-established personal and religious liberties, our courts as a whole, the integrity of our Justice Department, and the sanctity of life. He has done this, notwithstanding what appears to be the largest government agency backed attempted coup against a president in the history of the U.S. Any other candidate running, and the Democrat party candidates as a whole, would likely quickly eviscerate these constitutional protections and badly hurt the Church in the process. As genuinely distasteful as Trump’s rhetoric and personal morals might be for most of us, taking him out of office at this juncture would irreversibly hurt the cause of Christ in this country.

The bottom line is this: presidents come and go. Trump will be gone in, at most, five years. But Supreme Court justices and Federal Court judges remain in place for life, once appointed. Taking Mark’s advice would likely give you more decisions like the recent same-sex decision overturning the will of the people of over 30 states (Obergefell). Proper Godly advice would better have been to support and pray for our President and ask that God correct, strengthen and guide him to be able to lead the people of the United States while being more compassionate to those in need.