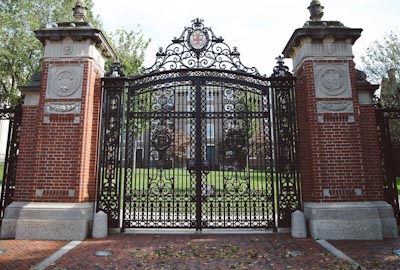 This academic year marks the 200th anniversary of a revival that forever changed the religious landscape of Providence, Rhode Island, and left a profound impact on the students at Brown University.

In his book, Piety in Providence: Class Dimensions of Religious Experience in Antebellum Rhode Island, Schantz detailed the fervor that engulfed the city.

“Sparked by Second Baptist Church, the blaze of religious enthusiasm soon spread and the glorious work of the Lord was extended throughout the town at large” with nightly meetings of preaching, praying, and singing.

Providence was no stranger to revivals, but this one was “unmatched,” wrote Schantz. “Neither Charles Finney’s visit in 1831 or the ripple of genteel enthusiasm of 1857-58 (Fulton Street Revival) surpassed it for sheer scale and transformative power.”

In his book, Schantz detailed how the 1820 revival led to the establishment of five churches in the city, and also led to social change by igniting “a crucible where laborers, artisans, and small shopkeepers forged a plebian religious culture of their own.”

He also noted how Willard Preston, a Congregationalist pastor, firmly declared to Brown University students that “never did the inhabitants of this town experience such a season of refreshing from the presence of God.”

On campus, the revival led to a prayer movement and saved souls.

Encyclopedia Brunoniana, a reference work published by the Brown University Library, notes, “In April 1820 there was a powerful religious revival in Providence, which spread to the students and brought about a prayer meeting attended by the whole student body, and the conversion of many.”

In 1821, students formed The Religious Society of Brown University. This organization replaced the Praying Society, which had started about 20 years earlier, according to Encyclopedia Brunoniana.

“The Praying Society formed by a few pious students in 1802 for the purpose of ‘their own sanctification and for the conversion of their fellow students.’ [The Praying Society] held prayer meetings and corresponded with similar societies in other colleges.”

For nearly two decades, The Praying Society kept the embers ignited until the fire of 1820 arrived.

In his book, Campus Aflame: A History of Evangelical Awakenings in Collegiate Communities, historian J. Edwin Orr notes that America was in a spiritual drought in the late eighteenth century and into the nineteenth century. But he also noted the presence of awakenings at schools like Brown at the beginning of the 1800s.

“The college awakenings of that era had a significant effect upon the corporate life of the colleges,” according to Orr. “The colleges appointed as presidents and professors the most dynamic Christian men available; campus prayer days were held regularly in term; and the college sermon became a regular feature of worship and religious education. By 1815, for example, the day of prayer had become a regular feature at Yale and Williams, Brown and Middlebury.”

In 1820, prior to the revival, the membership of the Praying Society at Brown had grown to about thirty, according to Encyclopedia Brunoniana; in its minutes, The Religious Society credited its praying forerunners, noting that the 1820 revival was “in answer to the prayers of its pious founders, and succeeding members.”

The revival in Providence certainly left its mark on Brown and other universities.

“Following the revival of 1820 and similar revivals in other institutions, the custom of the ‘Concert of Prayer’ or ‘College Fast’ in the colleges began in 1823, and became an annual event celebrated in January or February,” according to Encyclopedia Brunoniana. “There were eight subsequent religious revivals at Brown between 1834 and 1858.”

In Campus Aflame, Orr said the collegiate awakenings of the early nineteenth century continued effective for half a century and perpetuated themselves in a long period of vigorous activity of profound social and religious significance.

“They were a major force in the founding of colleges, in the work of philanthropy, and in the extension of the church, home and abroad,” he wrote. “College awakenings moved the best and produced the best.”