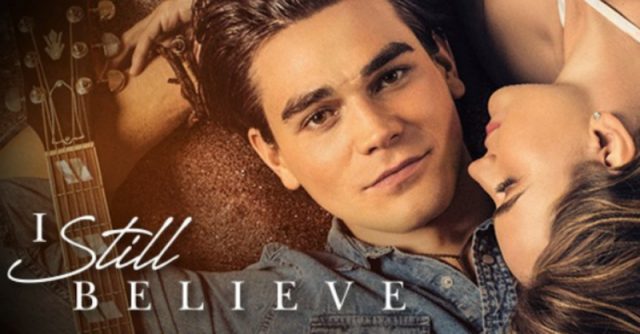 The 2018 faith-based movie I Can Only Imagine opened at No. 3, earned a rare A+ CinemaScore rating from moviegoers, and became the highest-grossing film ever released by the Erwin Brothers.

So how do you top that? Here’s how: You make a film that might be even better.

The faith-based film I Still Believe (PG) hit theaters March 13, but, due to the Coronavirus pandemic, is currently being released on demand. The movie tells the inspiring and emotion-laden romantic story of Jeremy Camp’s marriage to his first wife, Melissa. The two fell in love in college and then married, although Melissa soon was diagnosed with an aggressive form of ovarian cancer that claimed her life.

Melissa, though dying, grew in her faith until the very end. And Camp, though grieving, never left her side.

After her death, Camp penned the popular song, I Still Believe.

The film has drawn comparisons to I Can Only Imagine, although the stories are dramatically different. I Can Only Imagine spotlighted the relationship between an estranged father and son. I Still Believe is a romance and one of the best ones in that genre you’ll ever watch.

After all, it’s a romantic movie that promotes the biblical definition of love.

“That’s the thing I’m the most excited about,” co-director Andrew Erwin told me. “It’s a love story that is so palpable and just real, and kids are mesmerized by it. Instead of it being a feelings-based, how-do-you-make-me-feel love, it’s a commitment to walk through the fire together.”

It’s a squeaky-clean romance with no language or sexuality, and it just might be better than the Erwin Brothers’ 2018 hit film that grossed more than $83 million.

An embargo keeps me from saying too much. But I can say this: I Still Believe is a powerful movie that every teenager and young adult in America needs to see. (My 12-year-old son even enjoyed it.) It also contains a gospel-centric message that every church can support.

‘I Am Patrick’ (theaters) — It’s a feature-length docudrama about one of the most famous missionaries in the history of Christianity. Patrick risked his life to take the gospel to Ireland, and his ministry bore gospel fruit that can still be seen today. The film separates fact from fiction and weaves a riveting, inspiring story. It will be in theaters two nights only: March 17-18.

‘Heavenquest: A Pilgrim’s Progress’ (home video) — It’s a film that tells the “backstory” to John Bunyan’s famous novel. No, Bunyan didn’t write Heavenquest, but its story and allegory make it a worthy companion. Heavenquest tells how Evangelist — who is a supporting character in Bunyan’s book — became a servant of the one true King. The film is now on home video platforms. Unrated, it contains a few scenes that may not be appropriate for small children.

‘Beautiful Day in Neighborhood’ (home video) — Lloyd Vogel, a journalist for Esquire, learns to heal and forgive after interviewing Fred Rogers of Mister Rogers’ Neighborhood. The film is based on a true story and stars Tom Hanks, who is excellent in his role as Rogers. Rated PG for some strong thematic material, a brief fight and some mild language. Language includes: h– (4), OMG (2) and d–n (1).

Michael Foust has covered the intersection of faith and entertainment for more than 15 years. He is the husband to Julie and the father of four small children.