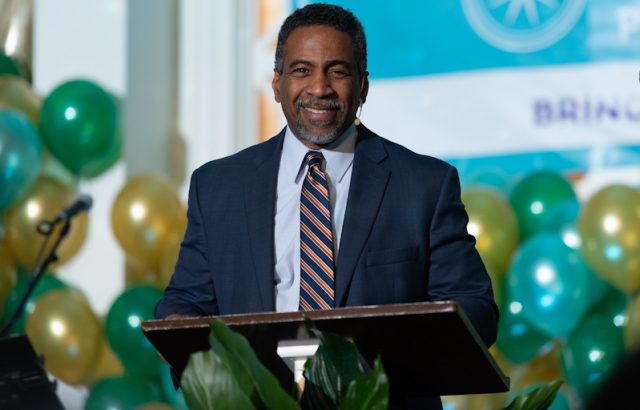 Roland Warren, CEO of Care Net, at the Lighthouse banquet

For Roland Warren, being pro-life is just not enough.

Warren is the president and CEO of Care Net, a network that serves over one-thousand pregnancy centers in North America. Earlier this year, at the Venetian Catering Hall in Garfield, New Jersey, he was the keynote speaker at Lighthouse Pregnancy Resource Center’s annual fundraising banquet. The Princeton University and Wharton Business School alumnus implored the crowd of 940 to adopt a more expansive “pro-abundant life” vision, as he laid out a biblical framework that aligned the movement with God’s design for families.

The banquet’s theme of Abundant Life was inspired by Psalm 36:9: “For with you is the fountain of life, in your light we see light.” The backdrop of the stage was comprised of 536 balloons, one for every baby born though the ministry of Lighthouse Pregnancy Resource Center in 2019 at its locations in Paterson, Hackensack, and Wayne.

“Each baby is represented by a balloon,” said Debbie Provencher, executive director of Lighthouse. “And each balloon matters, because each life matters.”

Those babies and the work of Lighthouse were indeed celebrated with live and video testimonies, but also noted were “the 48,000 babies not represented with a balloon tonight,” referring to the amount of abortions in New Jersey this past year.

“We want to do more,” said Provencher as she spoke about the purchase and current renovation of a 7,000-square foot headquarters and ministry center for Lighthouse on Lafayette Avenue in Hawthorne. (story continues after photo)

In his keynote address, Warren talked about experiencing an unplanned pregnancy while a student at Princeton University. When his girlfriend, Yvette Lopez, became pregnant, she visited the university’s student health services office. A counselor there encouraged her to get an abortion, saying, “How will you graduate from Princeton and become a doctor (her dream at the time) with a baby?” However, the couple, both 20 years old, was not swayed and decided to have the baby.

“Our student health coverage would not cover having a baby, but would pay for an abortion,” recalled Warren, who played football at Princeton.

For Warren and Lopez, the decision was based on the “certainty” that the image in the ultrasound was indeed a baby – not the uncertainty of their future. They also decided to be married.

Today, the couple has two grown sons and a grandchild. Yvette Lopez-Warren earned a psychology degree from Princeton in 1985 and practices family medicine in Maryland.

“We faced an unplanned pregnancy, not a crisis pregnancy,” said Warren.

The former president of the National Fatherhood Initiative, Warren then spoke about the “best-known unplanned pregnancy of all-time,” the birth of Jesus Christ: “Mary had questions, but focused on the ‘certainty’ that there was a life growing inside of her.”

Warren said that God ensured that the pregnancy would not become a crisis pregnancy by sending an angel to speak to Joseph, telling him to be a husband to Mary and a father to the baby.

“There has always been a role for men in God’s design for families,” said Warren, who was raised by a single mom. “When a father plays a role, the woman and child benefit. God wants children to have abundant life. God designed fathers with a specific role.”

“Jesus came into the world consistent with this design.”

Warren said the pro-life movement should consider a more holistic approach that has the power to transform lives, instead of solely focusing on “a woman and a baby.” When the Supreme Court legalized abortion, he said, it delinked motherhood and fatherhood. Now motherhood begins at conception, but fatherhood begins at birth.

“Being pro-abundant life requires embracing and promoting marriage, encouraging responsible fatherhood, and consistently sharing the transformative message of the Gospel of Jesus Christ,” Warren wrote in a booklet entitled Why We Must Be Pro-Abundant Life. “It means providing compassion, hope, and help to those facing pregnancy decisions so that they are empowered to choose life for their unborn children and abundant life for their families.”

Warren also exhorted the church to come alongside pregnancy centers in a greater way, and see a “unique opportunity” to fulfill The Great Commission and live out James 1:27, “Religion that is pure and undefiled before God the Father is this: to visit orphans and widows in their affliction, and to keep oneself unstained from the world.”

“The church needs to talk about this issue differently,” he said. “It will take more of our time, talent, and treasure.”

For more information on Lighthouse Pregnancy Resource Center, or to donate or volunteer, visit www.FriendsofLighthousePRC.org.