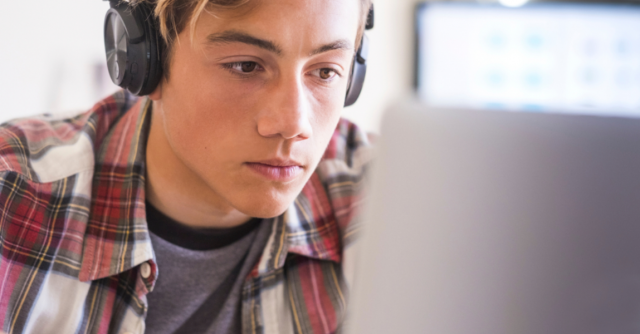 7:40 a.m. That’s when I hear it. Not my alarm. Not the garbage truck. Not even the buzzing of the Nespresso machine.

It’s the sound of school.

Typically my oldest son, who is a sophomore at Veritas Christian Academy, is being dropped off at the school building in Sparta around that time, but now instead of a commute, it’s a simple Webex login for his day to begin.

After talking to numerous friends and family who are experiencing the concept of homeschooling for the first time, calling this an adjustment would be an understatement. However, I have found that my own kid’s Christian schools are adjusting to this far better than most.

While there are tech hurdles and a general transition to learning remotely that both teachers and students must endure, the normalcy of a standard school day is still very much alive for the students of Veritas Christian Academy.

While I see celebrities waxing eloquent about how much free time people now have, I see my son studying in his room well past the typical 3 p.m. close of school. He has live classes pretty much every hour of the normal school day with a few exceptions. I believe they even tried to hold band class virtually the first week and quickly changed to private rehearsal times for each student.

The spring musical the school puts on every year is still having rehearsals. They run through each scene and the director continues to challenge the students to refine their parts with the hope and intention that the show will eventually go on.

While the school has maintained the organized and educational classroom all parent wants to see, it’s the spirit surrounding these virtual classes that has impressed me. The teachers are highly engaged and logging more hours than they would during a normal school day. And the kids are engaged as well. My son told me that during the first week of school his Spanish teacher was considerably late to class because she had troubles getting into the virtual classroom. Instead of abandoning class when the teacher was a no-show for the first thirty minutes, the students all stayed online and waited until the teacher arrived.

That same Spanish teacher brought her parrot to class recently to add some levity to the school day. Papers are still being written, tests are being administered, and even attendance is still being taken. One afternoon my wife received a text informing her that my son wasn’t present in his scheduled virtual class. We called upstairs and found he had lost track of time.

What school does that? I know of one.

The motto for Veritas Christian Academy is “A Higher Goal.” It’s a reminder that we serve a greater purpose in the glory of our Almighty God, but it’s also a standard of excellence that the school holds itself to and expects of its students. Amidst the chaos of our current world, that “higher goal” is on display.

Recently, I was reminded of the parable of the talents in Matthew 25. The servants who took what was given to them and put it to use were rewarded; the one who buried it for fear of losing it and experiencing repercussions from a harsh master was punished. Right now, Veritas Christian Academy is taking the resources God has given them and putting them to use regardless of the circumstances.

The reward will be eternal and earthly as these resources are used to glorify God through the students they are instructing today. These same students will be used for God’s glory in the future.

The most valuable part of a Christian education is that Biblical truth is at its core. That Biblical worldview being instilled in children, and especially high school students, is invaluable especially at this moment when our nation is searching for answers to the current unknown we’re facing in this virus. Prayer, Bible classes, godly instruction, teachers who care for kids’ souls as much as their GPA, that’s exactly what is needed now, and I pray each night for those teachers and administrators at Veritas Christian Academy because they are on the front lines of our children’s future.

David and Tara Marine are the parents of a student at Veritas Christian Academy and three other children at Northwest Christian School.