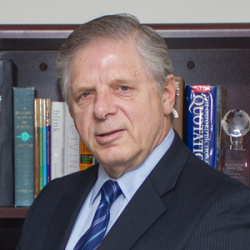 Editor’s note: The following article is reprinted with permission from Upfront, the newsletter of Dr. David Schroeder and Pillar College.

By the time you read this, we will be in the month of May, having escaped a very unusual, even oppressive, April due to the COVID-19 pandemic. There is hope that in May we may be released from our imposed isolation. “April showers bring May flowers,” my mother used to tell me.

In May 2003, I wrote an Upfront article by the same title as this one: In Exile or Exodus? Those were very different days, but the theme has come back to me often during the last six weeks. Are we in exile, or is this a time of exodus? I have concluded that the answer depends on your worldview. The Israelites knew both; they were in exodus after escaping their enslavement under the Egyptians, and they were in exile in Babylon. In neither situation where they in the Promised Land, but the situations differed greatly. In exodus, though not very happy much of the time, at least they knew they were free and on their way to the Promised Land. In exile, they were expelled from the Promised Land and were going nowhere.

Today, during this pandemic, people are responding in so many different ways. Those have had loved ones taken by the virus have a perspective the rest of us cannot fully grasp, so my comments here may not apply to them. But for the rest of us the question is apt: do we see ourselves in exile of exodus?

Those in exodus have escaped bondage to the godless culture of this world and are demonstrating their freedom by their hope, service and generosity. They are being led, not by the dictates of the surrounding culture, but by the God who has set them free. Those who are still in exile are dominated by the culture of this world and prove it by their self-absorbed anxiety. They acknowledge God but pay homage to the leading health and economic indicators. The litmus test of exodus versus exile Christianity is not politics or theology. Surprisingly, it’s economics. Let me explain.

The economic recession, fueled by the pandemic, has the public in the grip of fear. Many Americans who were formerly carefree, confident and generous are now in the bondage of anxiety, uncertainty and hoarding. And many believers are living in exile, according to the dictates of the culture around them, which will show most clearly in giving patterns. The fortunes or plight of almost all charitable organizations usually follow the stock market and other leading economic indicators. Even the Christian ones! Churches, mission agencies and parachurch groups may need to downsize radically.

People of the exodus — who have escaped the world of economic anxiety — know that this is a strategic time for the most important kind of investment, and they aren’t affected by this world’s slump. They never were so impacted because their giving was never convenience giving, but sacrificial giving. Faith motivates them, not fear. Convenience giving looks first at the stock market or the savings account and then calculates whether or not it is an economically reasonable time to give. Sacrificial giving is exodus living-trusting God for today’s provisions and tomorrow’s as well. Maybe He will provide for tomorrow by my saving today, but more likely He wants to show His power and faithfulness by leading me to defy the culture by living and giving trustingly. Exodus givers obey the teaching that the first tenth belongs to the Lord. Exile givers, wait to see if they can afford to give to the Lord.

There are two roadmaps for the inner life: the Bible and the newspaper (or other media). The Bible leads us into the lifestyle of exodus; while the newspaper keeps us in exile. The Bible beckons us to trust; the Times cautions us to conserve. Life in exile seems so settled, so safe, so predictable. Life in exodus seems so rugged, so directionless, so draining. People in exodus are not ignorant of the culture of exile– they’ve been there-but they won’t allow it to set their agenda.

So, there it is — a simple test to determine which culture you are living in. A prime indicator may be which direction your charitable giving is going.

Dr. David Schroeder is the president of Pillar College, New Jersey’s only fully-accredited evangelical four-year college. His latest book is entitled The Lion, The Church, and the Warfare.