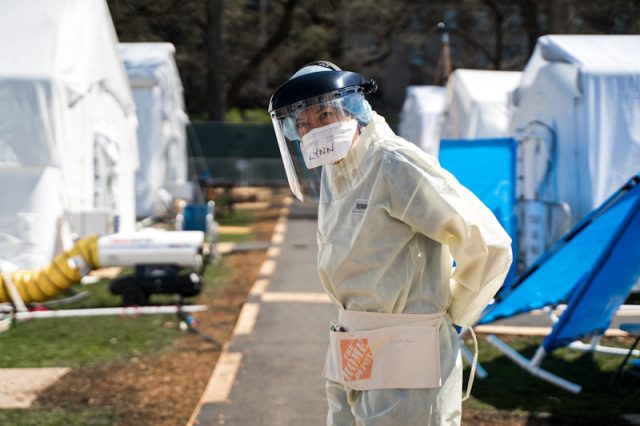 In his farewell address to the city at his Flushing Meadows crusade in 2005, the Rev. Billy Graham said, “I will be praying for New York every day when I leave here—that God will continue what He has begun. With all my heart, I love New York and thank God for it.”

From his historic 1957 Madison Square Garden crusade to those three summer nights in Queens when Rev. Graham came one last time to New York at the invitation of pastors following 9/11, the esteemed man of God and advisor to presidents held eight evangelistic outreaches here.

But these are different, darker days in the city. Apparently, you are not welcome any more if your last name is Graham, or if you have Christian beliefs—even if you so love the people of New York City. City Council Speaker Corey Johnson made that abundantly clear with his recent remarks about the relief organization Samaritan’s Purse, which had sent up a hospital in the city.

Additionaly, according to Forbes.com. New York Governor Andrew Cuomo this week confirmed that the state plans to send an income tax bill to out-of-state health care workers who came to New York City to help treat coronavirus patients, including those from Samaritan’s Purse.

“We’re not in a position to provide any subsidies right now because we have a $13 billion deficit,” Gov. Andrew Cuomo said.

When the COVID-19 pandemic hit the city hard, making it the epicenter of the virus, Samaritan’s Purse, led by Rev. Billy Graham’s son, Franklin Graham, deployed medical resources and personnel and set up a temporary hospital in Central Park. The same Central Park where Billy preached the Good News and hope of Christ to a quarter of a million people in 1991.

“They’re the ones who called us originally,” Franklin Graham told Faithwire, in reference to officials with the Mount Sinai Health System in New York City. “We didn’t call them; they called us,” he continued. “And we agreed to go and we have not charged them one penny. All of our services have been paid by God’s people.”

But as these good Samaritans were helping to save lives (of people of all faiths and no faith at all) and relieve pressure on a hemorrhaging hospital system, a crowd of LGBT activists began to voice its disapproval with their presence. In a scenario that is playing out all across this land, Christian organizations are being chastised for espousing Christian beliefs. Samaritan Purse’s crime: believing what the Bible says about marriage—that it is a holy union between a man and a woman.

On Friday, Council Speaker Johnson, said, “It is time for Samaritan’s Purse to leave New York City. This group, which is led by the notoriously bigoted, hate-spewing Franklin Graham, came at a time when our city couldn’t, in good conscience, turn away any offer of help. That time has passed. Their continued presence here is an affront to our values of inclusion, and is painful for all New Yorkers who care deeply about the LGBTQ community.”

Despite admitting that the city health care system still needed support, Johnson was adamant that assistance should not come from Samaritan’s Purse.

“At the City Council, we are committed to supporting those workers and protecting our city’s public health,” he said. “But as a city that values diversity and compassion for all, we cannot continue to allow a group with the track record of Samaritan’s Purse to remain here when we are past the point they are needed.”

According to news reports, Samaritan’s Purse is in the process of winding down operations at the field hospital it set up in Central Park last month. Franklin Graham told Faithwire that the protests and statement from the councilman had nothing to do with the organization’s decision to leave New York.

Still, the message has been sent from New York: you are not welcome if you are a Christian organization.

I wonder if this how Jesus felt, as he uttered the chilling words of Matthew 23:37, “Jerusalem, Jerusalem, you who kill the prophets and stone those sent to you, how often I have longed to gather your children together, as a hen gathers her chicks under her wings, and you were not willing.”

RELATED: The Left’s Message to Samaritan’s Purse as it Serves NYC: You Cannot Be Christian

RELATED ARTICLE: Honoring Billy Graham on the Two-Year Anniversary of His Death