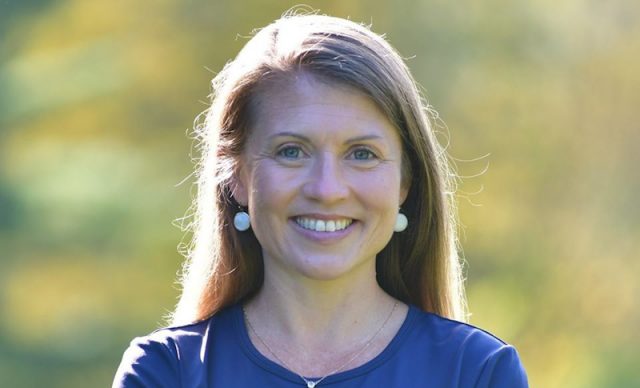 Since its release in 2018, Amy Julia Becker’s book on race has generated accolades and nationwide interest.

Among the tributes, White Picket Fences: Turning toward Love in a World Divided by Privilege earned an award of merit as part of Christianity Today’s 2019 book awards. In the NavPress publication, Becker (Princeton ’98) explains how she began reconsidering her background as an Ivy-League educated mother and wife. The book’s narrative has resonated with readers in diverse corners of the country.

“I am called to communicate biblical truth and ideas to spiritual seekers,” Becker ’98 said. “I’ve spoken everywhere from Connecticut to Colorado and down South.” Through White Picket Fences, Becker shares the charm of her comfortable childhood in the Deep South, her adult experiences in the Northeast, and the denials she has faced as the mother of a special-needs child.

Robust interest in White Picket Fences has generated myriad speaking opportunities for the seasoned writer. After overwhelming response to the 240-page book, the mother of three even released a supplemental guide with discussion questions in February.

“This has just been a steady book,” said Becker, who noted White Picket Fences has been used as reading material for churches, seminaries, and even colleges. Becker also receives frequent emails from admirers who share how her poignant writings have changed their perspectives.

In April of 2019, Becker, an alumna of Princeton Theological Seminary, was a featured guest at the Q Conference in Nashville. Q conferences highlight talks on the state of American culture and the ways Christians can navigate the complexity of a changing society. 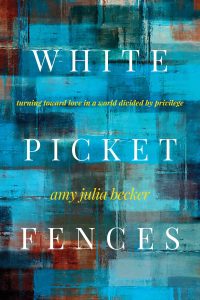 As she encounters readers and listeners of all ages and backgrounds, Becker explains that life behind a white picket fence can both restrict and protect. It also can prevent residents from loving their neighbors well. In a small town within North Carolina’s Inner Banks region, Becker grew up within walking distance of a local plantation, but without the full context of the history of slavery.

In addition to hitting the road for conferences and book tours, Becker also has participated in more various podcasts. She noted that traveling across the country to discuss privilege and healing divisions has underscored some key thoughts. “There is a deep fear of this topic but an even deeper longing to address it,” she wrote.

Such concepts were not far from Becker when she penned a column about her journey for a March issue of Princeton Alumni Weekly. She noted she arrived at Princeton as a “stereotypical student,” one who attended boarding school and was part of a lineage of family members hailing from institutions like Princeton.

During an African-American literature class at Princeton, Becker began to consider the “norms of whiteness as a social force pervading my life and the lives around me.”

Such classes “upended the simple narrative I had been taught and had told myself about my hometown, my childhood, and my history as a white American,” she wrote.

As a result, Becker picked up a certificate in African-American studies from Princeton. “My view of the world had shifted through those classes, but my place in the world remained the same,” she wrote.

Since graduating from Princeton, Becker’s essays on faith, family, and disability have appeared in an array of publications, including The Washington Post and The New York Times.

Likewise, giving birth to a daughter with Down syndrome thrust Becker into new experiences that reshaped her perspectives, especially on the addictive esteem intertwined with intellectualism.

Later, as a mother to a growing family, Becker realized she needed to educate her children about racial injustice within the United States. Such steps led Becker to be more intentional — to speak about the “problems of whiteness with white audiences, and to invite people of color to take up leadership positions for which they were overlooked before,” Becker wrote.

Today, such efforts are serving as the foundation for timely national discussions. As a writer, Becker treasures her role inviting people into these conversations.

Links to Amy Julia Becker’s blog and podcast are available at www.amyjuliabecker.com.