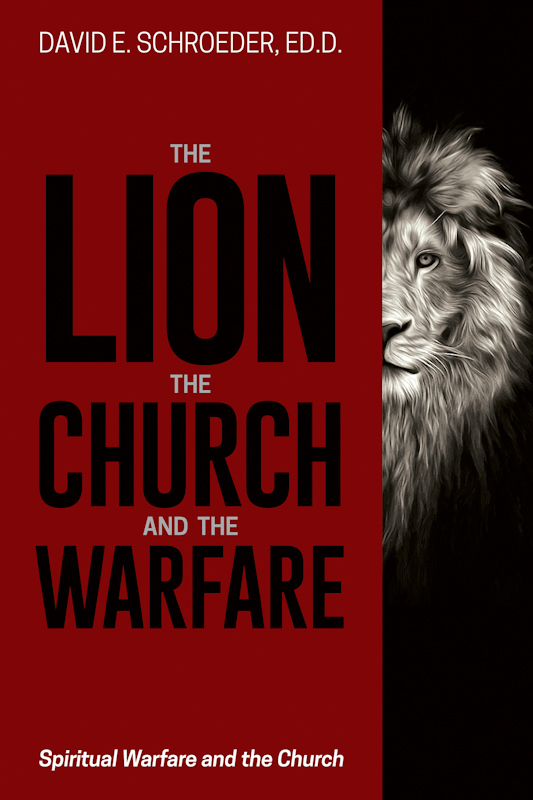 Tom Campisi, publisher of tristatevoice.com, recently interviewed Dr. David E. Schroeder, following the release of his latest book, The Lion, The Church and The Warfare. Dr. Schroeder, the author of ten books, is the president of Pillar College in Newark and Somerset, New Jersey. He has been in ministry since 1969, previously serving as president of Reformed Episcopal Seminary, Nyack College, and Alliance Theological Seminary.

A graduate of Nyack College, Manhattanville College, New York Theological Seminary and New York University, Dr. Schroeder has served churches in New York, New Jersey, and New England and with various missions organizations. His radio program “Walk-in Your Anointing” is aired weekly on stations in the Metro New York area. Betzi and David have been married for over five decades, have raised three children, and enjoy their eight grandchildren.

TOM CAMPISI: What motivated you to write The Lion, The Church, and the Warfare?

DAVID SCHROEDER: Like most Christians, I am saddened by the high number of pastors who drop out of the ministry, and by the high number of churches that have plateaued and are declining. Most often we blame personal failures and inept programming  and outreach for these failures. However, with an enlarged worldview that I have gained in the past decade, I believe spiritual warfare is behind the demise of so many pastors and churches. That is why I wrote The Lion, the Church and the Warfare — to awaken the Christian community to the subtle tactics that God’s enemy Is using to destroy the Church.

TC: What is the biggest misconception regarding spiritual warfare? How can this book help change any misconceptions?

DS: We tend to believe that Christian warfare is simply the dramatic expressions of demonism that we see in scripture and believe it was a problem only in those days or in less educated societies today. In truth, Satan’s activities in many less advanced countries is more overt, particularly in animistic cultures where Satan and demons are greatly feared. However, in many countries in the world, Satan’s primary strategy is to remain under cover, but active In rupturing relationships, sowing seeds of disbelief, and spreading sensuality through modern media.

I believe The Lion can help readers be more alert to spiritual realities in the natural world so they can better resist the devil who will then flee, James 4:7. I also pray that the book will give readers greater spiritual confidence to grow as spiritual warriors who can confront satanic power through truth encounters.

TC: Is this lack of attention to spiritual warfare more of  an American problem when compared to the rest of the world?

DS: Yes, I would say America and much of the West, including Europe. These countries are now considered “post-Christian” because the Church has been weakened, Christians have been seduced or secluded from the world, and Satan has used entertainment, education, and our life-style of luxury and leisure to keep Christians Disarmed.

TC: How can the premises of The Lion, The Church, and the Warfare and engaging in spiritual warfare be even more relevant during this unprecedented COVID-19 pandemic?

DS: For one thing, I hope all Christians are aware that this pandemic is a great opportunity for the Church to show itself to be a people of hope and help. While no one can say for sure that this is primarily an agent from God to judge the world or warn the world, we can at least say that God always outwits the devil and uses experiences like this to glorify himself and build his Church. I firmly believe that as we pray and are faithful, more people will be brought into the kingdom of God as believers than will die from the Corona virus. Many churches are reporting that attendance at their pre-recorded or live-streamed services are larger than their usual attendances. I think many Christians find it easier to invite friends and neighbors to listen and watch a service while at home than to invite them to attend the service at their church

TC: What personal experience(s) helped awaken you to the reality of Satan, demons, and spiritual warfare?

DS: Personal experiences in many countries have been a part of my being awakened to the reality of Satan‘s activities in our world today, but I could have seen those very same events but not understood what was happening had I not been convinced about a larger spiritual worldview than is normally believed in the West. For example, In Madurai, India, as a tourist in a Hindu temple, I ventured beyond the pathway we were to stay on and found myself in the entry way of a smaller temple enshrouded in a darkness I could feel. My hair standing on end, I could barely see through the smoke to some sort of sacrifice going on before a guard pushed me away with a scolding voice.

In my book, I tell of other episodes in Lagos, Nigeria, and other cities in Africa where witchcraft is used by Satan to hold people in bondage. Recently, in Uganda I participated in an expulsion of a demon and saw a beautiful turn-around of a young lady.

Sex-trafficking in Thailand, squalor and abject poverty in  Manila and Sao Paulo, radical religious terrorism around the world, the opioid epidemic among young people, fatherless families even in my own city, Newark, and white-collar greed and corruption are all very evident examples that convince me of a real, personal enemy who seeks to corrupt all of God’s beautiful creation, especially humankind and Christ’s bride, the Church.

TC: Two major influences in your book appear to be the works of Neil Anderson and C.S. Lewis. How have these men shaped your view of spiritual warfare? Why?

DS: C. S. Lewis was clearly an intellectual giant, self-described as the most reluctant convert dragged into the kingdom of God. He was enabled to see beyond the veil of the superficiality of naturalism and embrace the biblical worldview. His book, The Screwtape Letters, reveals his firm belief in the reality of Satan. Neil Anderson, in my estimation, brings together better than any contemporary theologian/practitioner the biblical teaching on the demonic with his own vast experience of demons in his counseling ministry. I also drew extensively from another seasoned expert in spiritual warfare, Dr. John A. MacMillan, missionary to China and the Philippines and author of The Authority of the Believer.

TC: What can the church do to be more aware of and engaged in spiritual warfare? And how would that impact Christianity and culture in general?

DS: Well, this is what my book is all about and why it was written, but to distill in a few paragraphs the essence, here are a few suggestions. Having just referred to The Authority of the Believer, I’d like to suggest that this is the beginning point, for Christians to be awakened to who they are in Christ and who Christ is in them. Jesus has all authority and he is so eager to exercise it through his children. Satan has no authority or power except to deceive us and hold us spiritually paralyzed. I recommend a great beginning place is to become saturated with the book of Ephesians, the entire six chapters, not just the part on spiritual armor in chapter six.

Second, besides reading my book, I encourage people to read Neil Anderson’s books, especially The Bondage Breaker and Victory Over the Darkness. These books not only give us a greater understanding of the supernatural worldview, they help us grow in our boldness to confront evil and its source, the devil.

But most importantly, developing and maintaining a robust devotional relationship with Jesus Christ will move us from being spiritual wimps to becoming spiritual warriors. As that happens, others will be encouraged to follow that example, the local church will be renewed, and its impact in bringing the light of the gospel’s grace into the community will transform the culture around us to be more like the kingdom of God.

The Lion, The Church, and The Warfare is available at various online book outlets, including Amazon.com.