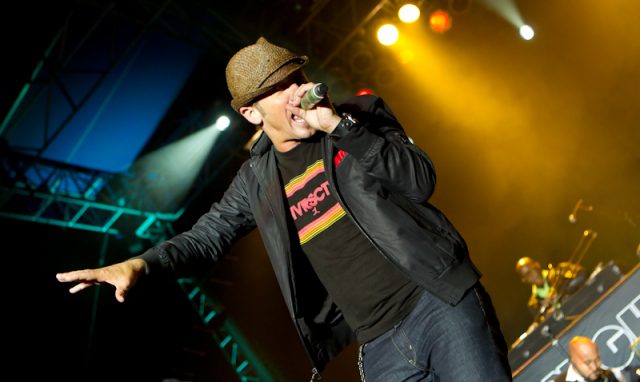 Editor’s note: This story originally appeared in the Tri-State Voice in September of 2010. We are reprinting this article as a testament to Christian Unity and racial unity. For six summers, starting in 2005, Bob and Kim Grom hosted Revelation Generation (or RevGen as it was known) at Revelation Farms in Hunterdon County, New Jersey.

Revelation Generation featured two full days and nights of power chords, menacing metal, and high-energy hip-hop, but TobyMac’s prayerful rendition of “City on our Knees” may have spoken the loudest. As the vast crowd at the New York Stage held their candles under a clear country sky, Christian music’s biggest artist and his Diverse-City band closed out a stellar Labor Day weekend festival in Frenchtown, NJ with lyrics that captured the spirit of the event.

Tonight’s the night, for the sinners and the saints. Two worlds collide, in a glorious display…

Two worlds have, in fact, collided since the inception of RevGen in 2005. From the beginning, founders Bob and Kim Grom sought to reach outside the walls of the church and outside the comfort zone by bringing in popular bands that were led by Christians, but not labeled as such—groups like this year’s headliners Anberlin, The Devil Wears Prada, and Fireflight. RevGen has joined these bands with crossover acts like Skillet (Saturday’s closer) and top contemporary Christian artists to create an eclectic menu that can appeal to a wide range of young people, black and white, metal and mellow, churched and un-churched. The 2010 edition featured over 60 bands on five stages.

On the rock and metal heavy Philadelphia Stage, the lyrics were hard to decipher, but when the artists were interviewed about their faith in Christ in Tent 7, the message came through quite clearly. Pastor Jack Redmond, youth director at Christ Church and founder of Fourth Generation Ministries, was one of the Tent 7 interviewers.

“I had a great time interviewing the bands,” he said. “The greatest thing of all was to experience their humility and love for Jesus.”

Redmond also was a speaker on the Urban Stage, sandwiched between GRITS and Trip Lee. An Urban Stage and a Philadelphia Stage within shouting distance is indeed quite a statement about racial unity and diversity.

It’s all love tonight, when we step across the line. We can sail across the sea, to a city with one king, a city on our knees…

In 1997, Toby co-founded the E.R.A.C.E. Foundation with fellow dc Talk members Michael Tait and Kevin Max to “celebrate the diversity of the human race rather than use our differences as a pretense for racial separation.”

All Star Jams help get the racial reconciliation message out and provide financial support for organizations that embody the E.R.A.C.E. mission statement—organizations like New Hope Academy in Franklin, Tenn., a Christian school that serves a diverse student body from low-income, middle class, and affluent families.

The primary charitable beneficiary for RevGen this year was The Blind Project. Based in Manhattan, The Blind Project raises awareness about sex trafficking and serves organizations that rescue and provide rehabilitation to victims and survivors in Southeast Asia.

“The Blind Project is excited to partner with Revelation Generation,” said Co-Founder Anthony Dodero. “Together we will stand for the restoration and renewal of those exploited and enslaved by the commercial sex trade.”

So with a prophetic voice and as a voice of one calling in the wilderness, Revelation Generation, despite its numerous and talented musical guests, is about much more than music. In a recent feature article, the Star-Ledger’s Tris McCall wrote that RevGen “has quietly become one of the most important musical events in New Jersey.”

In that article Sean Grom, a member of the festival’s steering committee, spoke about the event’s ever-increasing influence.

“When we began, RevGen was something we could give to people in our local high school,” he said. “Now we see our community as New York, New Jersey and Pennsylvania, maybe beyond. We never thought it would grow this far, this fast.”

RELATED STORY: “What Happened to George Floyd Could Have Happened to My Sons” – NJ Pastor