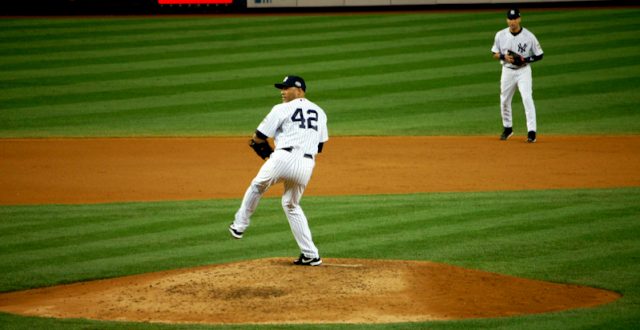 Throughout his career, Mariano Rivera, the GOAT, the greatest closer in the history of major league baseball, was never sheepish about his faith or testifying about the source of his strength. When it came time to deliver his Hall of Fame speech in July 2019 in Cooperstown, he again was not ashamed of the Gospel of Jesus Christ.

Rivera, the only player to ever be unanimously inducted into the hall, is baseball’s all-time leader in saves with 652. In the post-season, as a member of five Yankees’ World Series championship teams, he was even better, saving a record 42 games and posting a miniscule 0.70 ERA in 96 appearances.

On a hot, sunny afternoon in Cooperstown, in front of a sea of Yankees’ fans, Rivera closed the Hall of Fame ceremonies for the Class of 2019. As usual, the Sandman entered and put first things first:

I want to start this (by) thanking my good Lord and Savior Jesus Christ for giving me the talent and the blessing and opening doors that I could never close, and no man can close…It’s amazing. So thank you, Lord, for everything You have done in my life.

Rivera then thanked his family and his former teammates and coaches, especially manager Joe Torre. He thanked GM Brian Cashman, and the Steinbrenner family, and, of course, the Yankees’ fans, who “pushed me to the limit”:

To the fans, you guys always push me to be the best. When I was at Yankee Stadium, pitching, it felt like I was pitching with 55,000 people next to me throwing one pitch after another. You guys are the best. Without your support, I cannot do it. You always push me to the limit, always wishing me the best, but always all the boos when I don’t do my job, I really deserve it. You guys came to see me succeed. But those guys also that have a bat in their hand, they have a job to do, too. So thank you.

In his speech, Rivera reflected on the journey from his native Panama, where he could barely afford a pair of spikes, to working his way through the Yankees’ minor league system. He made it to the show in 1995, only to be sent back down, along with Derek Jeter.

“Can you believe that now?” Rivera said, to a chorus of laughter. “We were almost crying. Couldn’t believe it. That only make us stronger. (In) ’96, I had to fight for my job again.”

In 1996, Rivera established himself as the team’s setup man behind closer John Wetteland, as the Yankees’ beat the Atlanta Braves for the team’s first world championship since 1978. The next season, Wetteland was gone and Rivera was the new closer.

“I was shocked…,” he said. “Again, God had different things for me.”

However, at the beginning of 1997, Rivera struggled as the closer. In his speech, he said he was propelled by Torre’s faith in him, and also by a new pitch he soon developed, the legendary cut fastball:

A few days after that, the Lord gave me the best pitch in baseball. The cut fastball. | was playing catch with Ramiro Mendoza. I’m throwing the ball the same way I’m throwing it since | was six-years-old. Now the ball is moving. I was afraid, I don’t know what to do. Imagine that, a closer that don’t know where the ball is going to go? (We) just won the World Series the previous year, now you have all that responsibility, and you don’t know where the ball is going. That was me. As a matter of fact, after that game we went to Detroit, and (pitching coach) Mel (Stottlemyre ), Mike Borzello, the bullpen catcher, and myself, we worked for 45 minutes almost to an hour to make the ball stop from moving. Thank God the ball didn’t stop. I told Mel, “Whatever is going to happen is going to happen.” I learn how to use that pitch. I used that pitch for 17 years, and I used it well. I used it to the last day that I pitched at Yankee Stadium.

On that famous last day at the end of the 2014 season, manager Joe Girardi sent Andy Pettitte and Jeter to the mound to take out Rivera, who left a legacy of greatness, grace, and thousands of frustrated hitters.

Rivera was “grateful to the good Lord (who) allowed me to play in New York with the greatest fans and end out my career the way I did—with my two brothers next to me, me hugging them and crying over them, being thankful for them.”