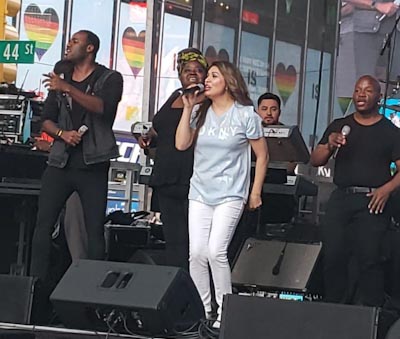 Editor’s note: In a recent Facebook post, Rev. David Beidel, founder of Saturate NYC, recalled the nearing one-year annivesary of Jesus Week 2019 (posted at end of story) and said, “We are preparing to launch Jesus Week 2020 in a different way during this unprecedented season of sorrow. Please pray for God’s hand once again to move in power.”

Here is the article we ran last year in tristatevoice.com.

On Saturday, June 29, 2019, Times Square was turned into a Holy Temple, according to Rev. David Beidel, the founder of Saturate New York.

As the sweet  fragrance of worship intermingled with the gospel infused the streets, thousands of people were drawn to experience Jesus Week XL’s Grand Finale Worship Celebration event, which was organized by Saturate New York. The Times Square finale was the culmination of six weeks of outreach events and Bible distribution initiatives in various communities across Metro New York.

In Times Square, people stopped, listened, engaged, received free books, and asked questions. Some stopped for five minutes, some for hours. Pastor Darnell Harper exclaimed: “It was like Pentecost with the many nations present. I had a number of people tell me that they were taking the material back to their country…one sister led a Buddhist to Christ who wanted a Bible after he received salvation.”

“We prayed with people from all over the world,” said Sonya Cherici, one of the prayer counselors.

After more than eight months of planning, Saturate NY Metro’s founder, David Beidel, discovered the Jesus Week finale coincided with the World Gay Pride events in New York City. In addition, another major concern came from a weather report predicting a looming storm on the horizon.

“We were concerned that it might be perceived that we had planned this in order to be disruptive. That’s the last thing that we wanted!” said Beidel. “Many prayers were lifted up for all the potential storms. God answered with power.”

Cherici said the Saturate team proceeded prayerfully, despite any concerns.

“It was awesome that the Jesus Week finale was unexpectedly held at the same time as the Pride events,” she said. “I was able to share the love of Christ with people who were participating in that celebration. One man decorated in the rainbow colors was standing to the right of the stage mesmerized by the performance. I walked up to him and explained that we were there to spread the love of Christ. I told him that he was deeply loved by the Lord… He needed to know that all he has to do is call upon the name of Jesus….”

As the music began, Beidel sensed that “God was moving with power over the Square” as people praised the Lord. Some danced in His presence.

“Alma Rivera, Freddy Washington, Willana Mack, and the Nyack College Choir brought heaven down!” he said. “Tens of thousands experienced the lovingkindness and joy of our Lord. The power of God kept washing over the crowds.”

By five o’clock, black storm clouds were threatening to wash over the crowds. Again the team from Saturate prayed. The Eagles Wings band began to worship and filled the atmosphere with sweet joy and hope, Beidel said. Archbishop Steve Smith shared the Gospel and the crowd received the message warmly. In the middle of the second musical act, as children from the Gifted and Talented School in the Bronx began to perform, it began to sprinkle a bit. Then within five minutes, a representative from the mayor’s office told event organizers to pull the plug. The event needed to end immediately.

Eight months of planning, hundreds of man hours, and $35,000 in non-refundable expenses went into this event, which was in jeopardy of cancellation.

“It was unthinkable. Everyone began to pray for the Lord to rebuke the wind and the rain. We declared peace in Jesus name and waited for God’s answer,” Beidel said.

In the meantime, the Mayors representative explained to Beidel that less than a mile north of Times Square monsoon conditions and severe weather forced the evacuation of a big event in Central Park; it seemed inevitable that the storm would descend upon the Saturate event.

While awaiting a decision from the Mayor’s office, the Saturate team went into the streets to pray with people and hand out thousands of books and Every Home For Christ tracts.

“I gave one of our outreach books to a man. Around 15 minutes later he came back after reading several chapters. God so moved in his heart that he prayed and wept as he gave his life to Christ,” shared Pastor Harper.

Finally, an hour later, the Mayor’s representative convinced her office, that the Times Square area was clear and called to give the go ahead.

“One day in glory, I look forward to talking with the angels who held back the storm and smiled with our Heavenly Father on the worshippers and prayer warriors who gathered to build a holy altar in the center of NYC and in the center of all kinds of storms,” Beidel said.

“As it turned out, God worked everything that happened that day for His good. All the outdoor events in New York City were cancelled, except Jesus Week XL! All of New York was swamped and deluged, except Times Square! There was only one place to go if you were looking for something to do where the skies were clear – Times Square! There were already record numbers of New Yorkers, out of towners and internationals in NYC because of Pride Month. Many were re-routed to Times Square as a result of the storm. Like a good shepherd, God corralled all his precious ones so they could hear and feel His passionate love for them.”

In the final two hours of the event, Tom Maharis, Dimas Salaberrios and Beidel shared the good news. Each time the Gospel was preached, an opportunity was given to all to receive Jesus Christ as their Lord and Savior.

“We are confident that in heaven, we will meet thousands who lifted up their hearts to JESUS on that beautiful day when God made Times Square into a temple for His name!” Beidel said.

This memory just came up. What an extraordinary miracle we experienced last year. We had no idea what was going on all…