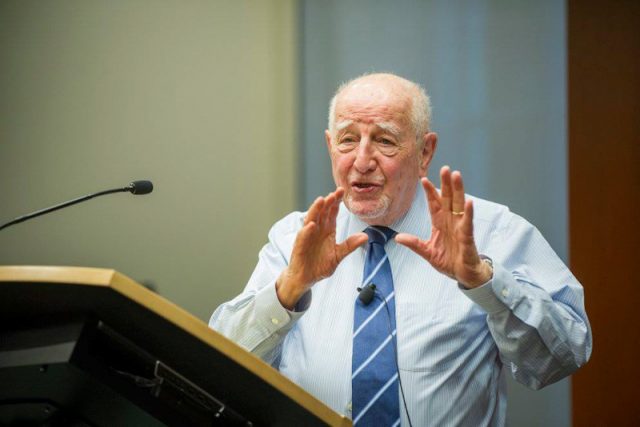 Excellence––but only with decency and humanity.”

These are the words of the Honorable Guido Calabresi, delivered at a public conversation at St. Thomas More Catholic Chapel and Center at Yale before COVID-19 shut down the campus in the spring semester.

Calabresi, a senior judge of the United States Court of Appeals for the Second Circuit, was the guest speaker at Theology on Tap, a delightful series of monthly conversations hosted by St. Thomas More that are geared towards community members over the age of 21. Attended mainly by upperclassmen and graduate students, the series allows for rich conversations on faith, life, and exegesis, with the relaxed feel of an intimate, after-dinner gathering, thanks to the “tap.”

True to his motto, Calabresi has certainly led a life marked by excellence. Calabresi graduated summa cum laude from Yale College (’53), won a Rhodes Scholarship to study at the University of Oxford, graduated first in his class at Yale Law School (’58), clerked for a Supreme Court justice, became one of the youngest scholars ever to be granted a full professorship at Yale Law, and contributed groundbreaking research to the field of law and economics. He was appointed as a Sterling Professor, Yale’s highest honor, and became the Dean of Yale Law School before he was appointed by President Bill Clinton to serve on the United States Court of Appeals.

But, as Calabresi said, excellence is empty when it stands on its own. Throughout his life, Calabresi’s unwavering faith has served as the foundation for all of his endeavors.

Every Sunday at the 10 a.m. mass at St. Thomas More Chapel, one can find Calabresi perched in his customary pew, second from the front on the right. Calabresi has been a pillar of the St. Thomas More community for decades, having stayed connected to Yale after graduating. In fact, most of Calabresi’s life has been spent in the Elm City. Born in Milan, Italy, Calabresi was a young boy when his parents, who resisted Italian fascism in the 1930s, fled to the United States and settled in New Haven. Calabresi’s Italian-Catholic roots have deeply influenced his faith and his judicial vision alike.

When faced with moral quandaries as a presider over the court, Calabresi has turned to the moral formation of his faith. To interpret and execute man-made laws, there must be a higher, divine law towards which one can turn. When required to preside over weighty cases, Calabresi has found strength and guidance through Catholic teachings on justice and mercy. He believes a judge, first and foremost, ought to uphold the law as it stands, but should always be searching for ways to incorporate mercy and grace into his or her decisions.

It is important, as a judge, to be affected by troubling cases and sometimes troubling laws, Calabresi said. He noted that, when interviewing potential clerks, he will always ask them if there is any point of the law that concerns them morally. If they answer “no,” it is not a promising sign of their future employment—there are absolutely moral stakes in the law, and anyone interpreting the law should feel the weight of those stakes deeply.

Aside from his time on the bench, Calabresi has also served as an academic and often spiritual mentor to his students. As a professor at Yale Law for several decades, he has had no shortage of bright, hungry minds to shepherd. Over the years, Calabresi has witnessed countless students succumb to the pull of an ambition that knows no bounds––a drive to succeed divorced from the drive to do good. He noted that he has often been the first in his student’s life to tell them that  “excellence by itself is a disaster.”

In some ways, this is unsurprising. As Calabresi observed, “in school we tend to, inevitably, award people according to their excellence, and not look beyond it.” Especially at a place like Yale Law, students are used to being rewarded for their pursuit of greatness, and are constantly striving after their next achievement. Calabresi sees this mindset as one in need of considerable tweaking. He reminds his students that “some of the worst people who did the worst things were excellent, extraordinarily able. Hitler was extraordinarily able.”

This is not to say that excellence is without its worth. For those called to serve in prominent public positions, a high level of competence in certain affairs is necessary. For Calabresi, “Goodness without excellence is wonderful, but is not likely to be effective in a variety of situations.” Thereby, his mantra remains sound. Excellence always—but only with decency and humanity.