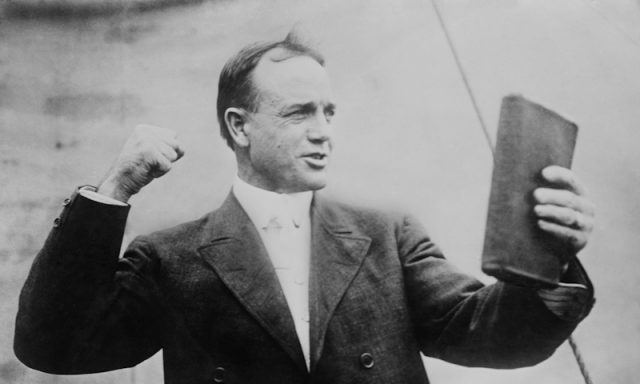 The year was 1890 and baseball was growing in popularity as America’s pastime. It would also usher a period of significant change within the game. By the end of the decade, baseball looked a lot more like it is today. For Billy Sunday, the year also marked the end of his playing career.

But Sunday is unique in that he exchanged his bat for a Bible and embarked on a career as a preacher, capitalizing on his time as a ballplayer to generate interest in his revivals. He would go on to became the most celebrated American evangelist during the early part of the 20th century. He didn’t just limit his preaching to rural towns, but also opened his mind to preaching in large urban centers like New York.

From his playing career with the National League teams in Chicago, Pittsburgh and Philadelphia to the initial hurdles he’d encounter preaching in New York, the aptly-named Sunday used his fame, exuberance and his gift for public speaking to save souls to bring muscular Christianity and conservative theology to the masses. To some, Sunday remains an obscure and long forgotten man. Love him or hate him, Sunday’s influence on American culture in the early part of the 20th century should not be underestimated.  What he failed to do with a bat, he made up for at the pulpit.

A natural athlete, Sunday began his baseball career playing semi-pro in Iowa in 1882 before signing with the Chicago White Stockings (later known as the Sox) a year later. He was still playing professionally when Sunday in 1886 when he walked into a Salvation Army and became a Christian believer, a conversion that would forever alter the course of his life. By the early 1900s, Sunday — with help from his wife Helen Thompson, who would become known as “Ma Sunday” — came to national prominence for his traveling revivals. Asked once about his life for Nell, Sunday said, “She was a Presbyterian, so I am a Presbyterian. Had she been a Catholic, I would have been a Catholic — because I was hot on the trail of Nell.”

As a ballplayer, Sunday was primarily known for his speed. Nonetheless, his rookie season was forgettable, collecting just 13 hits in 54 at-bats for a .241 average in just 14 games. A .248 hitter over his eight-year career, Sunday was an outfielder who delighted crowds as an outfielder. In 1886, Sunday played in just 28 games after contracting an eye infection.

“While the 1886 baseball season would have been a disappointment for Sunday, what happened off the field changed his life forever,” wrote Wendy Knickerbocker, a historian and author of the book “Sunday at the Ballpark: Billy Sunday’s Professional Baseball Career, 1883-1890” that was released 20 years ago. “Sometime in the spring he began attending services and youth group meetings at the Jefferson Park Presbyterian Church in Chicago, which was near both the ballpark and Sunday’s rooming house. … Sunday joined the church, and by the end of the summer he was regarded as a clean-living church-goer.”

A supporter of prohibition, Sunday would become more than a church-goer. He regularly spoke to Sunday school classes and began going to the Pacific Garden Mission, an evangelical Christian mission in Chicago, before deciding to hit what came to be known as the “Sawdust Trail.” By 1890, Sunday was done with baseball and within six years started to preach the Gospel to large crowds, particularly in the Midwest after working as an assistant to well-known evangelist J. Wilbur Chapman. These revivals made famous by Sunday took place decades before radio and later television would make Billy Graham among the most prominent preachers in the world.

Among the biggest moments of Sunday’s life is when he held a series of revivals in New York City starting in April 1917 that would run for 10 weeks. His arrival at Penn Station was greeted by a crowd of 5,000. Sunday mustered all his energy and charisma during his New York crusade.

Sunday, at first, didn’t care for New York City — even calling it a “graveyard for evangelism.” In the end, he grew to appreciate New Yorkers: “I think New Yorkers are keener than country folk. They are more used to seeing and hearing new things; they catch on quicker. I couldn’t give them any Class B stuff; not even when I was tired or wanted to.”

Even as a preacher, Sunday couldn’t escape his baseball past. His New York revivals were held on 168th Street and Broadway in upper Manhattan, the former home of the New York Highlanders baseball team. They later become to be the Yankees. Sunday would later name three Yankees — Babe Ruth, Lou Gehrig and Tony Lazzeri — when asked to name the best lineup in baseball of his lifetime, the most of any team. He humbly left himself off the team.

It was from April to June of 1917 that the Iowa-born preacher called New York his temporary home as thousands came to see the Presbyterian minister. He claimed that 68,000 people had become faithful Christians as a result of attending his revivals. He would go on to preach across New England, even holding crusades in Providence during the Spanish flu.

“New York has shown me that its Great White Way is not the pathway to hell that many believe,” he was quoted as saying at the time. “I know that many who walk the pavements of Broadway are as close to God as I am.”

New York would be no stranger to religious gatherings. From Graham to Pope John Paul II to Joel Osteen, prominent Christians across the denominational spectrum have embraced — and been embraced — by large crowds in New York City.

Sunday died in 1935. In a tragic epilogue to Sunday’s life, it should be noted that all three of his sons died violently: George from a fall from a hotel window; Billy, Jr. in a car accident and Paul in a plane crash. Billy Sunday only had three grandchildren, which resulted in just one great-grandchild. That great-grandchild, Marquis Ashley Sunday, was killed on March 22, 1982. Just 50 years after his death, Sunday had no living descendants. Nonetheless, he lives on as an evangelist who traveled the country to preach the Gospel and saw the value of doing it in large urban centers like New York City.