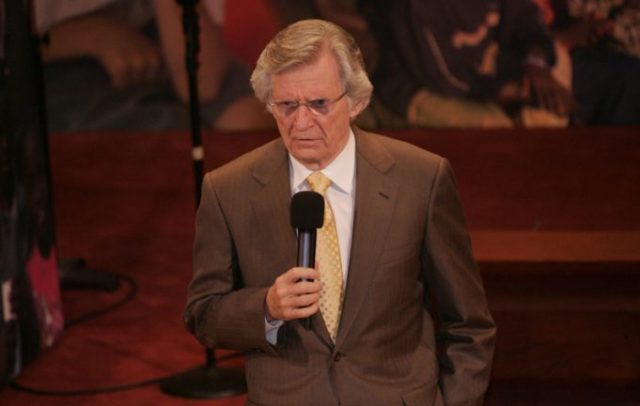 In a 2007 message, Pastor David Wilkerson warned about an impending calamity that would be “clearly beyond humankind’s capacity to respond.”

Judgement from heaven would come, he said, primarily because of the world’s violence against children through pedophilia, human trafficking, school shootings, and abortion.

Thirteen years ago, Wilkerson said God was about to turn the world upside down (quoting Isaiah 24). In his message, entitled “In One Hour Everything Will Change,” he talked about churches being shuttered and everyone relegated to their own home. Restaurants and bars would also close, and sports would become “irrelevant.”

While this scene could have easily been describing COVID-19 in the spring of 2020, the prophecy also foreshadowed how the pandemic has indeed re-shifted our priorities.

“In a single hour, the focus of our lives will be changed,” Wilkerson said. “We’ll no longer obsess about our own adversities and troubles. Suddenly, so many things that we held dear will no longer be of any value to us.”

“All idols will come crashing down, crushed to dust, and the playing field will be leveled. The richest and the poorest alike will face the same conditions. Once this judgment strikes, it will devastate the economy.”

Wilkerson, who died in 2011, is the founding pastor of Times Square Church, the founder of Teen Challenge, and the author of several books, including The Cross and The Switchblade. In this prophetic message (available on YouTube), he quotes several verses from Isaiah 24:

“Sudden judgment is coming upon the earth, and it will change everything in a single hour. Within that short span, the whole world will witness fast-falling destruction upon a city and a nation, and the world will never be the same…”

In several messages and prophetic words throughout the years, Wilkerson described a vision of a thousand fires burning throughout New York City. In 2007, he spoke about “utter chaos” erupting, which is similar to what has happened following the murder of George Floyd in Minneapolis. In the ensuing weeks after the tragedy, fires burned in cities across America as rioters hijacked peaceful protests. With a presidential election looming in the United States, we may not have seen the end of the chaos.

“All civic activities will stop, and society will descend into massive disorder,” Wilkerson said. “Government agencies will be helpless to restore any kind of sanity. No state troopers, no national guard, no army will be able to bring order to the upheaval.”

Although Wilkerson alluded to more of a terrorist or nuclear attack than a pandemic in his 2007 message, no one can argue that the scene in Isaiah 24 is eerily similar to what is happening today in New York City and around the world.

Wilkerson said, “a sudden cataclysmic event will strike, the first of the final judgments of God” will come upon the earth because “the cup of violence overflows,” especially violence against children.

“Right now, there are numerous wars and bloody uprisings taking place around the globe,” said Wilkerson in 2007. “Yet, foremost in my mind is the violence being waged against children worldwide.”

Wilkerson pointed to the sexual violence of human traffickers and pedophiles and abuse from “clergy in the world’s largest denomination.”

“Children all over the world are being raped, kidnapped, and forced into enslavement in the global sex trade,” he said.

Wilkerson also pointed to the slaughter of children in African tribal wars and the forced enlistment of young boys in militias there.

In the United States, he lamented “the blood of millions of aborted babies crying out from the ground” and how reports of school murders no longer shock many of us, but continue to terrorize our children.

Of course, school shootings have increased since Wilkerson’s warning in 2007.

“We may grow hardened to such reports, but God’s heart is grieved by them,” he said.

Because of this violence against the world’s children, “Heaven is crying out, Woe, woe! Your judgments have no cure,’” said Wilkerson.

“I tell you, there is no worse violence than the brutalization of children.”

As we look at this prophetic warning from Wilkerson, what are we to make of it in 2020? Is the Coronavirus plague a judgement from heaven?

In the last four months, a lot of Christian leaders have quoted 2nd Chronicles 7:14: “If my people, which are called by my name, shall humble themselves, and pray, and seek my face, and turn from their wicked ways; then will I hear from heaven, and will forgive their sin, and will heal their land.”

There has been an uptick in prayer and seeking God since the pandemic began, but has there been an increase in humbling or repentance? We all want God to “heal our land,” but are we willing to turn from our wicked ways?

Some thirteen years after Wilkerson’s prophecy, we can look at the arrest of alleged pedophile Jeffrey Epstein and his accomplice, Ghislaine Maxwell, and see how the world is finally taking notice of this perverted violence against children. Hopefully, the arrest of Maxwell will expose all—in high places and low places—who have abused children and justice will be served.

In regards to abortion, the increase in wickedness in our region is an abomination. Early in 2019, New York Governor Andrew Cuomo signed into the law the most radical abortion legislation in the nation. This legislation was then celebrated by political leaders who defiantly lit the Empire State Building pink.

In New Jersey, Governor Phil Murphy and the state government shamelessly continue to lavishly fund Planned Parenthood at the expense of the taxpayers during trying economic times.

Is heaven crying out against New York and New Jersey?

Despite the dire warning, Wilkerson said his prophecy was not a message of wrath to God’s people, but “a wakeup call to begin preparing.” And a calamity like COVID-19 could set the stage for a mighty revival.

“A holy remnant is going to awaken, and a song will be born in the fire (Isaiah 24:15),” he said. “Instead of panicking, the people of God will be praising his awesome majesty. Imagine it: in the darkest hour of all time, a collective voice will rise by the millions out of every nation, not in fear or agony, but in joyful praise to the Lord.”

In one hour, God is going to regenerate and restore his church, according to Wilkerson.

“Dry bones will shake and rattle, and the righteous will be awakened, as the Holy Spirit calls multitudes of lukewarm believers back to their first love,” he said. “In His mercy, He is going to rouse those who have neglected him, ignoring his Word, avoiding prayer, perhaps even contemplating divorce. Suddenly, their souls will be flooded with pangs of remorse and godly sorrow. And many will fall on their knees, crying out in repentance.”

May it be so, Lord Jesus.