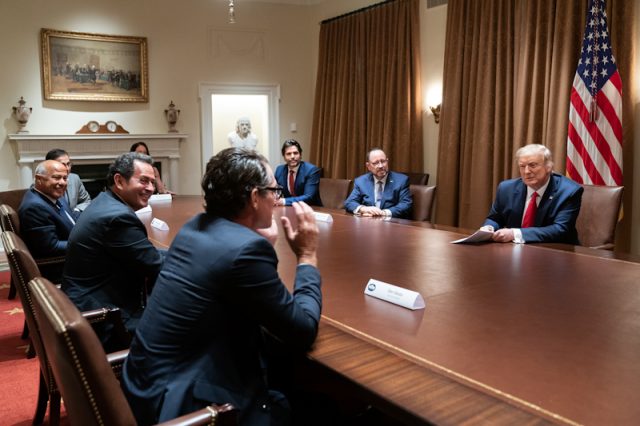 Editor’s note: In light of the threatened boycott of Goya Foods in response to one remark at the White House by its CEO Robert Unanue, TriStateVoice.com is printing the full transcript of his comments. Unanue, a resident of Wyckoff, New Jersey, has said he would not apologize, according to media reports. On July 9, Mr. Unanue was one of several Hispanic leaders at a roundtable meeting in the Cabinet Room.

I’m Bob Unanue, third generation. I’m CEO and president of Goya Food, Inc., a multibillion dollar company with facilities all over the United States and the Caribbean and Spain. We have about 4,500 employees we call “la gran familia Goya” — the great Goya family. And these people, we didn’t — we haven’t been back to work because we never stopped. We never stopped working. We doubled our efforts. And I asked the guys and gals, and I said, “Hey, this is tough.” And they said, “Look, if we don’t do it, nobody will.” And they said, “Presente.” The said, “Count on us.”

In 1936, he established — he was importing products in Spain. That was the Spanish Civil War. That dried up. He established Goya foods on Duane Street in Manhattan.

MR. UNANUE: At that time, it was a butter and egg market. And now you have Bouley and all these great restaurants and all the — the marvelous things of New York.

But anyway, we’re all over the United States. And the United States, after Mexico, is the largest Hispanic country in the world. By 2050, we will be one third of the population. Prosperity is what we need to — faith in God, prosperity — to work hard and to build.

You are an incredible builder. And that, I tell our — our people, our family, “Look, we’re just beginning.” Because as the country grows, as the Hispanic community grows, we continue to grow. And that is the American Dream. That’s our (inaudible). Thank you.”