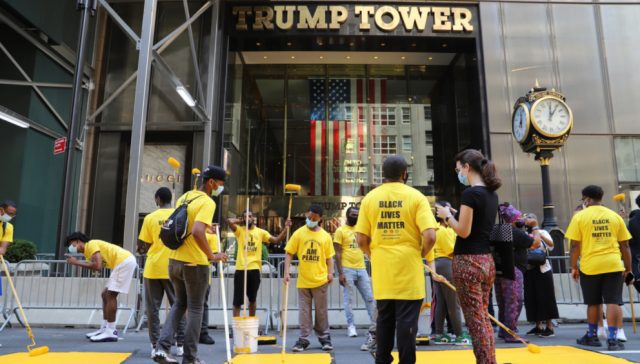 Over the weekend, African-American activists Bevelyn Beatty and Edmee Chavannes were arrested for pouring black paint over the Black Live Matter mural outside of Trump Tower in Manhattan. According to the New York Post, the women, who live in Staten Island, were “at it again just hours later,” painting over BLM murals in Harlem and Brooklyn.

Beatty, who was wearing a #jesusmatters t-shirt, claimed she vandalized the mural in protest of the Black Lives Matter organization and as a show of support for the New York City Police Department. Ironically, as she was being arrested in front of Trump Tower, a struggle ensued and a police officer slipped on the paint and banged his head on the pavement. He was taken away in an ambulance.

According to Beatty’s Facebook page, she is the co-founder/evangelist of At the Well Ministries. Beatty and Chavannes also made headlines in June when they were arrested as they protested and counseled women outside a Planned Parenthood Building in New York. According to several media reports, they were arrested for violating social distancing regulations despite massive BLM protests in the city.

“Jesus matters,” said Beatty in a recent video, as she was about to pour paint on a BLM mural. “We’re taking our country back. We’re taking it back, and let me tell you something, the police need our help. They can’t stand alone. Don’t just sit by idly and watch your country go to the ground.”

In an interview with Eric Metaxas on The Eric Metaxas Radio Show, Beatty said she defaced the mural in front of Trump Tower because New York City Mayor Bill de Blasio “gave the president the middle finger” when he allowed Black Lives Matter to be painted at that location. She also called BLM a Marxist organization run by white liberals and one that is diametrically opposed to the biblical definition of family—a man, a woman, and children.

Metaxas, a devout Christian and a conservative, heaped praises on Beatty for her act of defiance, calling her “an absolutely extraordinary” and “brave” woman.

“When I saw the video I flipped,” Metaxas told Beatty. “I said, ‘God has answered the prayers of the saints,’ because we need a thousand of you doing what you were doing.”

That kind of hero’s welcome did not sit well with Jeremy Del Rio, the co-founder of Thrive Collective and a long-time Christian leader in New York. Thrive Collective, which “creates hope and opportunity through arts, sports, and mentoring in and around public schools,” worked on the Black Lives Matter mural in Manhattan (Foley Square) and has commissioned over 140 multicultural murals in school yards across the city. Thrive recently led a “Kindness Beats the Virus” campaign for youth.

Del Rio said it was “disingenuous” for Metaxas to condemn the recent vandalism of private property (in various cities) and then praise vandalism of lawful public art.”

“Regardless of whether one agrees with the statement Black Lives Matter, the BLM murals in New York and elsewhere have been properly permitted by relevant authorities as protected speech and also as legal street art,” he said. “To deface what the community co-created in a politically motivated tantrum is both criminal and cowardly.”

In this space, I have written about Eric Metaxas many times, specifically when he authored books on courageous Christians like William Wilberforce and Dietrich Bonhoeffer. I consider him a friend and admire his passion for the Lord, his unmatched humor, and his amazing writing. But I have to disagree with him on his assessment of Beatty and her acts of defiance. I do not consider Bevelyn Beatty a hero.

And as far as wearing a #jesusmatters t-shirt and preaching during the mischief, the Church in the city does not need that kind of chaotic distraction in the wake of the COVID-19 pandemic and the racial protests following the murder of George Floyd. Jesus is alive and well in New York. The Church is alive through the bold voice of Pastor Dimas Salaberrios and his “Stop the Silence” prayer events and the timely wisdom of pastors like Dr. A.R. Bernard, Dr. Tim Keller, and Dr. Joe Mattera. It is alive through the prayerful, catalytic, and unifying witness of LEAD.NYC and Movement.org and leaders like Adam Durso and Dr. Mac Pier, and the selfless service of organizations like New York City Relief, Street Life Ministries, Saturate New York, and Hope Day.

In the Chronicles of Narnia, C.S. Lewis wrote that Aslan was “on the move.” In the midst of these unprecented times, Jesus is certainly on the move in New York. With a victorious, bold-as-a-lion king like Jesus, “the weapons of our warfare” are certainly not black paint buckets, but are “mighty through God for pulling down strongholds” as we seek the prosperity of the city.