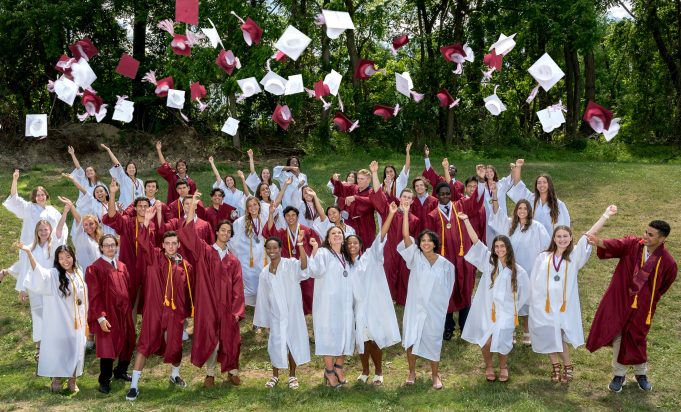 Due to the COVID-19 pandemic, high school, middle school, and grammar school students, families, teachers, and administrators faced unprecedented challenges in the spring. In recognition of the faith, hard work, and perseverance at local Christian schools, TriStateVoice.com is honoring graduates in July. Today, we honor Hawthorne Christian Academy in Hawthorne, NJ.

During the 12th grade graduation ceremony, HCA Salutatorian, Ava Rainey, encouraged her fellow graduates to remember all that they had learned at HCA as they look ahead to the future, saying, “We have witnessed such powerful testimonies of the goodness of God through our teachers, HCA staff, chapel speakers, family, and friends.” She exhorted her peers to give their lives and talents to the Lord and walk in His purpose, reminding them that “When we surrender ourselves and our ambitions to the Lord and make Him our captain, nothing in this life can overtake us and steer us away from His unfailing love and safety.” (story continues after ad)

In her address to her classmates, Valedictorian Gianna D’Amato, expressed appreciation for HCA, saying, “We’re a family; a body of believers and I love being a part of it.” She also thanked her teachers and HCA community for making their senior year so special, with heartfelt words, “The effort and time spent to make us feel loved, celebrated, and connected is much noted and appreciated.” In her main charge, Gianna referenced 1 Corinthians 9:24, which challenges believers to run the race before them in such a way to win the prize. As the HCA Class of 2020 completed the last stretch of “a long four-year race…A race where teachers, family, and friends have come alongside us and encouraged us to finish, and to finish well,” she reminded her classmates that, though storms may come, they must fix their eyes on Jesus, our living hope, as the next race begins.

HCA’s 2020 Graduation Ceremonies can be viewed on the school’s Facebook Page, where each 12th grade graduate has also been individually featured.

Hawthorne Christian Academy is committed to inspire and challenge our students toward spiritual maturity, to achieve academic excellence, and to impact the world for Christ.