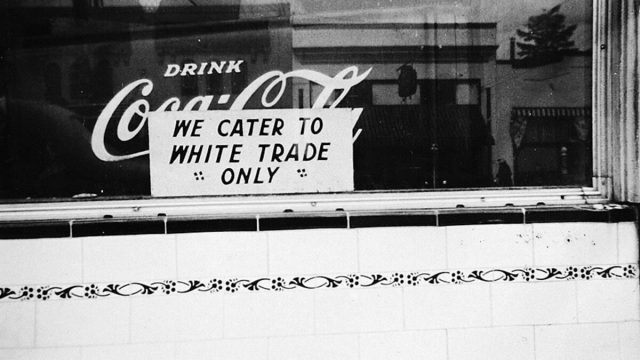 The stock images of the segregated era, when the young John Robert Lewis of Alabama and other Civil Rights activists risked their lives, have restricted our vision of the injustice of their era.

The “White Only” signs posted over water fountains, restrooms and waiting rooms registered the humiliation of African Americans.  This humiliation was sustained by “White Only” churches as well as telephone booths, restaurants, hotels, libraries, neighborhoods and cemeteries; the “White Only” sections of the bus and movie theater added to the shaming.  While the depth of humiliation and the indignities of racial segregation can never be over-calculated, these signs have limited our understanding of the injustice of racial segregation as a travesty of American life.

Lewis understood the injustices of racial segregation in light of the “Beloved Community.”  The idea of the Beloved Community, drawn from the Christian faith in the Black church, drove his critique of “Segregated America” and his vision of a post-segregated society.  More than a narrow individualistic theological idea, the Beloved Community pictured the holistic Jesus of St. Luke 4 whose ministry and message of good news for the poor, release for the incarcerated, healing for the afflicted, liberation for the oppression and the year of jubilee defined the core of the Christian faith.

This theology of the Beloved Community framed sin as both personal and corporate. Segregation was more than an issue of personal piety or a civil rights issue requiring a legislative remedy.  Lewis said that “segregation is evil.”  It was a moral issue requiring a moral solution, a solution Lewis found in the Christian faith.  The three pillars of the Beloved Community were “love, peace and true brotherhood,” Lewis said.

Leaders of the March on Washington in 1963. Lewis is second from right. Creative Commons image from the U.S. National Archives and Records Administration.

Lewis called for the politics marked by “immoral compromises” and alliances with explicit “forms of political, economic and social exploitation” to be exchanged by a politics in which morals remain uncompromised and commitments to political equality, economic justice and the social equality of all races structured the nation. The Beloved Community presupposed a revolution of values:  bigotry replaced by love; hostility substituted with love; injustice supplanted by justice; exploitation displaced by reconciliation.  For Lewis, nonviolent active resistance driven by love created “a source of power” in the society which resided “outside of any national structure,” and, it appears, was a power of love that came from God.  So, the struggle of nonviolent active resistance against segregation, according to Lewis, was to be conducted in a Christian manner “with the spirit of love and with the spirit of dignity.”

A simple removal of the “Whites Only” signs from water fountains, restrooms and waiting rooms missed the larger problem of segregation.  The era of legalized racial segregation and discrimination was marked by the economic exploitation, political disfranchisement and social subordination of African Americans.

The theology of the Beloved Community provided Lewis with a broader frame to confront segregation.  In his historic speech at the 1963 March on Washington, Lewis spoke about jobs and economic justice.  He contended that African Americans “must free ourselves of the chains of political and economic slavery,” calling for radical economic changes. During segregation, “White Only” labor unions, police forces and fire departments deprived African Americans of middle-class wages, erecting a two-tier employment sector with higher-paying jobs for whites and less-than-minimum wage jobs for African Americans who were African Americans qualified to perform these jobs.  During segregation, the managerial and executive realm of the American economy was reserved for whites only; African Americans were slotted in subordinate job positions.  Even outside of the “Segregated South” of the early 1960’s, only a small percentage of African Americans were able to break through these economic racial barriers.  Both de jure and de facto segregation with their respective anti-Black barriers, radically diminished the lifetime income of qualified African Americans.  A simple removal of the “White Only” signs from water fountains, restrooms and waiting rooms was inadequate for Lewis.

The social relegation of African Americans to the lower tiers of the economy was compounded by racial discrimination in housing, education and healthcare.  Discrimination in these arenas became the norm under the government-sanctioned public policy of “separate but equal.” The housing in “White Only” neighborhoods appreciated at a greater rate than housing in Black neighborhoods because of redlining.   Government-backed “White Only” banks and insurance companies invested in the white neighborhoods they created.  This investment contributed to the appreciation of white housing stock, generating white wealth.  However, the government’s non-investment in Black housing retarded the generation of Black wealth.

“White Only” public schools, colleges, and universities received a higher per student allotment.  This ensured a two-tier educational system: well-funded schools for whites and under-funded schools for blacks.  Substandard educational institutions limited the employment prospects of African Americans as well as career choices. The refusal of “White Only” hospitals to serve African Americans and the substandard health care facilities available for most African Americans in the “Segregated South” resulted in higher rates of infant mortality and shorter life spans of Black Americans than white Americans.  A simple removal of the “White Only” signs from water fountains, restrooms, and waiting rooms was insufficient to Lewis.

Lewis knew that restricting the access of African Americans to voting with poll taxes, literacy tests and “grandfather clauses” was pivotal in maintaining the political clout and white privileges of pro-segregationists and their allies.  Segregationist politicians and judges deployed “White Only” police departments to maintain the disenfranchisement of African Americans.  With legal maneuvers, these judges ruled that efforts to register Black voters broke the law.  Police and state troopers employed state-sponsored terrorism against peaceful civil rights demonstrators.  They utilized clubs, cow-whips, firehoses, tear-gas and guns to intimidate, harass, beat, maim and kill the activists.

A theology of the Beloved Community helped Lewis to link the “political, economic and social exploitation” of African Americans in his critique of segregation.  He saw the passing of the Civil Rights Act of 1964, the Voting Rights Act of 1965 and the Fair Housing Act of 1968 by Congress criminalize segregationist behavior, dismantle the segregationist political order, remove the racial barriers in the economy, and provide equal access to housing, education and health care.  For Lewis these legislative achievements were only steps towards a better society and the Beloved Community.  According to Lewis, activists “must work for the community of love, peace and true brotherhood” and “cannot rest until freedom and justice exist for all people.

A half-century after the “White Only” signs cease to dot the landscape, U.S. Congressman John Lewis unfortunately had to witness the gutting of key features of anti-discrimination employment laws and voting rights for African Americans.  Adjusting our optics about the past can inspire new strategies to fight for racial justice in the present with the moral commitments exhibited by John Lewis as we work toward the Beloved Community.

Dr. Daniels is the Henry Winters Luce Professor of World Christianity at McCormick Theological Seminary in Chicago where he has served on the faculty since 1987.  His research areas includes the history of the Black Church, Global Pentecostalism and African Christians in sixteenth century Europe.