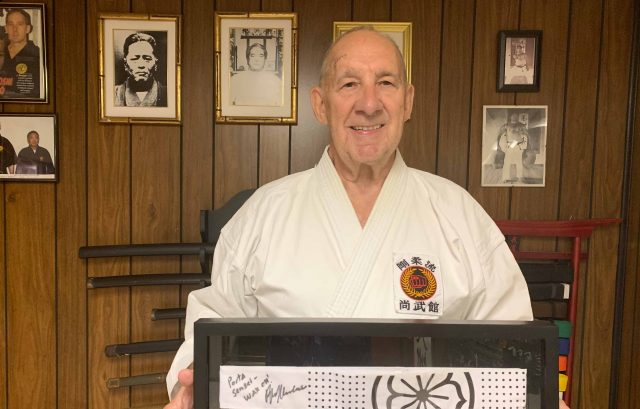 Sensei John Porta has used the art of karate to teach others self-respect, discipline, and self-defense for more than 50 years.

But rather than get caught up on the more sensational or athletic aspects of the 300-year-old art form, Porta has gone deeper with it. He uses it to glorify God.

“Respect, discipline, it all falls into Christian character,” Porta said. “The karate I learned, it was developed around respect and self-discipline.”

Porta, of Wayne, was inducted into the USA Martial Arts Hall of Fame this year for earning his ninth-degree black belt with a master teacher certification. The most prestigious karate organizations in Okinawa, Japan, bestowed the rank upon him.

There is a warrior-type aspect to the discipline, however, one that Porta believes is scriptural.

“Moses grew up in the royal household and they were all trained in the arts of war,” Porta said. “Joshua and Gideon, those guys were warriors, but they didn’t rely on themselves, they relied on God…”

Porta’s rank is the highest bestowed to an American. To earn it, he had to do more work than someone going for their doctorate. He had to publish papers, teach karate, give demonstrations, and help raise money for charity. Rising through the ranks has provided him with opportunities to share the Gospel.

“I’ve been invited to a number of different dedication ceremonies. They invite me because of my rank and ask me to speak,” Porta said. “Even at these dedications, I can witness and tell them about Jesus. That isn’t me, that’s God and me using the abilities He has blessed me with for His glory.”

Porta opened the area’s first karate school in Pompton Lakes in 1966. He retired from teaching not long ago. His senior students took over running the school. He is now an advisor at the school and a teacher of teachers.

“Karate, it’s almost two separate things. There’s a sport aspect to it, but it was never defined as a sport. It was designed as self-protection and self-development,” Porta said. “The old masters never believed it was for competition. It is for self-discipline.”

Porta’s love of karate began about 65 years ago. In 1959, he became a security specialist and self-protection instructor with the U.S. Coast Guard, a position he held for eight years. An ordained minister and founder and director of Mighty Warrior Ministries, Porta provides faith-based training for houses of worship security personnel.

“I feel that’s what God has called me to do. When 9/11 happened, ISIS rose up, and people were being shot in churches. I felt called to help,” Porta said. “There was so much going on and nobody knew how to have proper security in churches.”

Porta instructs security personnel what to do during a variety of situations – from when someone disturbs a pastor preaching to a person acting suspiciously in the foyer to someone walking into the church with an AK-47 rifle.

“You have to be willing to give your life,” Porta said. “If someone does walk into the church with an AK-47, you call the police. But, it could take five minutes for the police to get there. I really feel called to teach churches how to keep their congregations as safe as possible.”