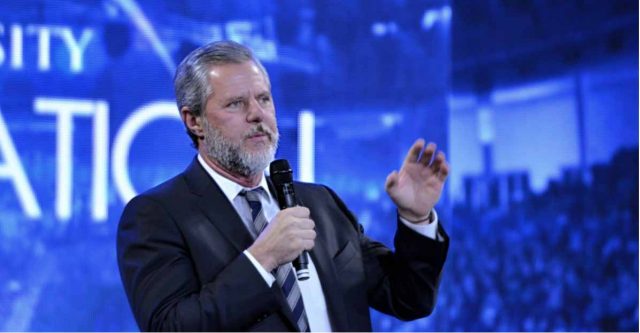 By Karen Swallow Prior

When the scandal—and the sex—are the result of absolutely unchecked power.

This week’s headlines about the resignation of Jerry Falwell, Jr., from his role as president of Liberty University, the world’s largest evangelical university, may have centered on the salacious parts of a leader’s downfall—a bizarre social media post featuring unzipped pants, a wife’s affair with the pool attendant, and the husband’s penchant for voyeurism. But those headlines don’t capture the most important part of the story.

Some responding to the news have pointed, not surprisingly, to the hypocrisy of a leader whose ongoing behavior has so excessively violated the stated rules of the institution he leads. And while that double standard is a grievous aspect of this saga, even that is not the most important story.

The story that needs to be seen, heard, and heeded is the story of what happens when men and women have power but no accountability. And there are many stories within this story.

Like the story of a former president of the Southern Baptist Convention and two Baptist seminaries who during his reign empowered and enabled at least two sex offenders and bullied two victims of sexual assault who had been entrusted to his care.

Like the evangelical megachurch that responded to watchdog bloggers exposing egregious financial irregularities (later shown to be well-founded accusations) with a libel lawsuit.

Like the progressive megachurch pastor known for empowering and platforming women who made multiple unwanted advances toward a woman in his employ whose complaints went unheeded by the many people in power in the church.

Like the Southern Baptist pastor whose church gave him a standing ovation upon admitting and asking forgiveness for sexually assaulting a teenager years before when he was a youth pastor.

Like the CEO of a church planting network whose pattern of spiritual abuse through bullying and intimidation was allowed through years of repeated complaints from those serving under him.

The list of these stories goes on and on.

Of course, these abuses of power are by no means limited to churches and Christian institutions. One need look only to Matt Lauer, Harvey Weinstein, and Jeffrey Epstein—media, Hollywood, and Wall St. darlings, respectively—to be reminded that sexual abuse by those whose power is unchecked by the systems that uphold them knows no doctrine or creed. As the nineteenth century historian Lord Acton sagely observed, “Despotic power is always accompanied by corruption of morality.”

But there is an especially poignant pain when such abuses are incurred by those who claim to have built their lives and their institutions on the renunciation of such immorality and the embrace of Christlike virtue and love.

I know this because I feel that pain. Not as a victim of the worst kind of abuse (unimaginable to those who have not experienced it), but abusers of unchecked power take no prisoners. All who put their faith, their time, their resources, and their love in the works of such hands only to have those investments squandered are victims of varying degrees. I am one. My students who are hurt, confused, and betrayed are even more so.

I don’t marvel at the depravity or licentiousness of any one individual. After all, I believe the orthodox Christian doctrines about humanity’s sinful nature. But I find it inexplicable that a body of people legally, ethically and morally responsible for the health of an institution—no matter how large or how small—would for so long—whether by acts of omission or commission—allow to run rampant a leader who has brought shame time and time again to their own institution.

As a conservative evangelical (and one who recently left Liberty University after 21 years of teaching there), I understand the conflicted, ambivalent relationship evangelicalism has and has had for 300 years with institutional authority. Evangelicals establish institutions with as much experience and finesse as a seventh-grade boy at a school dance.

But this is not a drill. Churches, schools, universities, all Christian ministries steward in the name of Christ the most precious things in all of creation: human bodies and souls.

Since the 2016 election, it has become axiomatic that evangelicals are enamored by idea of access to power. (Indeed, the story of Jerry Falwell’s fall is inextricably linked to his infatuation with President Trump and his access to the Oval Office.) There is a deep, tragic irony in the fact that one of the traditional hallmarks of both conservatism and evangelicalism is the distrust of centralized power. Yet here conservatism evangelicalism stands. And falls.

In the name of conservatism, we conserve the wrong things.

In the name of evangelism, we evangelize for the wrong gods.

In the name of religion, we harm those entrusted to our care.

Jesus had severe words for such actions:

Things that cause people to stumble are bound to come, but woe to anyone through whom they come.  It would be better for them to be thrown into the sea with a millstone tied around their neck than to cause one of these little ones to stumble. So watch yourselves.

It’s long past time to watch the watchers.

The bodies, hearts, and souls of the victims and the vulnerable are at stake.

Karen Swallow Prior is a former professor of English at Liberty University. She is the author of Booked: Literature in the Soul of Me and contributes to Christianity Today, The Atlantic and Relevant magazine, among other publications. She lives in Amherst, VA.