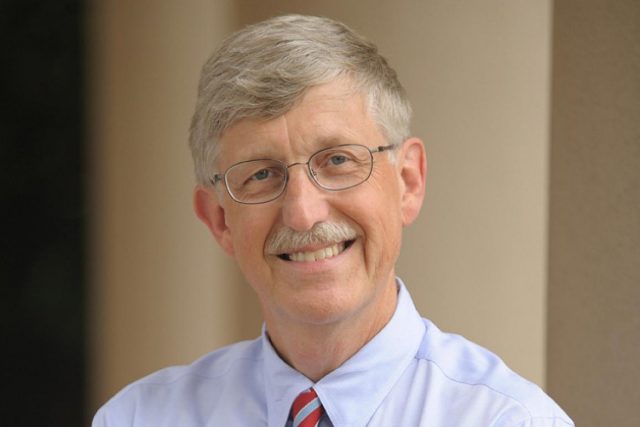 The organization honored the U.S. National Institutes of Health (NIH) director with its 2020 Templeton Prize, valued at roughly $1.3 million, in recognition of his advocacy for the integration of faith and reason. The Yale doctoral alumnus of 1974 is best known for his pioneering efforts to sequence the human genome.

Collins said he was “profoundly humbled” by the prestigious award. Past honorees include Mother Teresa, Archbishop Desmond Tutu, and the Dalai Lama.

“The realization that principles of faith and science are complementary has been of great comfort to me in the search for truth,” Collins tweeted in May to coincide with the announcement from the Templeton Foundation.

In late 2019, Templeton Prize judges selected Collins as the 2020 laureate, but the organization delayed its announcement amid the coronavirus pandemic. In conjunction with the announcement, Collins noted appreciation for both the wonders of biological science and God’s faithfulness.

“The elegant complexity of human biology constantly creates in me a sense of awe,” he wrote.

Collins also described his team’s consuming efforts to help find treatments and a vaccine for COVID-19. As NIH director, Collins oversees the federal government’s biomedical and public health research efforts, including the pursuit of a vaccine to prevent the novel virus.

Despite the tragic nature of coronavirus, Collins poignantly expressed his trust in God amid the pandemic. “I remember that the God who hung on the cross is intimately familiar with suffering. I learn and relearn that God never promised freedom from suffering–but rather to be ‘our refuge and strength, a very present help in trouble,’” Collins wrote in a statement on behalf of Templeton Foundation.

As NIH director, Collins supervises the work of famed immunologist Anthony Fauci. The Weill Cornell Medicine alumnus of 1966 is the government’s top infectious disease expert and a key player in the country’s response to the coronavirus outbreak.

On May 20, Templeton Foundation announced Collins as the newest winner of the world’s top honor in faith and science. The 70-year-old geneticist will formally receive the Templeton Prize in a virtual ceremony later this year.

For Collins, the timing of the announcement amid the global pandemic was somewhat overwhelming, but gratifying. “As I write this, almost my every waking moment is consumed by the effort to find treatments and a vaccine for COVID-19,” Collins noted.

Collins, who was appointed to his post in 2008, is the longest-serving NIH director. The native of Virginia’s Shenandoah Valley directed the National Human Genome Research Institute between 1993 and 2008 as it famously mapped and sequenced the 3 billion DNA letters inside the human genetic instruction book.

Throughout his scientific leadership, writing, and speaking engagements, Collins has demonstrated how faith can motivate and inspire rigorous scientific research. In his 2006 book, he offered support for certitude in the existence of a Supreme Being alongside an up-close look at his groundbreaking research in genomics.

The experience of sequencing the human genome was “both a stunning scientific achievement and an occasion of worship,” Collins wrote in The Language of God: A Scientist Presents Evidence for Belief. “Many will be puzzled by these sentiments, assuming that a rigorous scientist could not also be a serious believer in a transcendent God.” He penned his bestseller to argue that “belief in God can be an entirely rational choice, and that the principles of faith are, in fact, complementary with the principles of science.”

Collins began his medical studies at University of North Carolina in 1973 as an unapologetic atheist. He gradually warmed up to Christianity after being inspired by the faith of the terminally ill patients. Compelling conversations prompted the insatiably curious scholar to devour C.S. Lewis’s Mere Christianity, which makes a rational case for the existence of God.

During a post-medical college trek to Washington’s Cascade Range, Collins, then 27, was struck by some of the remarkable beauty of creation. During the visit to the mountainous Northwest, he committed his life to Christ and went on to complete residencies in the UNC Medical Center.

Between 1981 and 1984, Collins returned to the Ivy League, where he served as a postdoctoral fellow in human genetics at the Yale School of Medicine. As a Yale postdoctoral fellow, he developed a technique called chromosome jumping, which allowed gene hunters to jump over large sections of chromosomes to reach the location of disease genes. Later, at the University of Michigan, Collins used that tool and new ones to track down the genes for cystic fibrosis, Huntington disease, neurofibromatosis, and more.

In 1993, Collins stepped into his pivotal role as director of the National Center for Human Genome Research. Under his leadership in 2000, the Human Genome Project famously announced its assembly of a working draft of the sequence of the human genome, essentially the genetic blueprint for human life.

Collins’s public engagement around faith and science began to pick up after he appeared in a lecture series at the Memorial Church of Harvard University. For three nights in February 2003, hundreds of eager students packed the church to hear the famed scientist and posit thought-provoking questions.

Within his talks, Collins readily addressed his personal voyage from atheist to believer. At a time when much of the intersection of science and conversation was dominated by polarizing voices, Collins sought to show how an “intellectual synthesis” was possible.

“It is time to call a truce in the escalating war between science and spirit,” he wrote in The Language of God. “The war was never really necessary.”

On the heels of his bestselling book, Collins established BioLogos in 2007. The Michigan-based organization promotes harmony between the historical Christian faith and evolutionary creation. It offers rich curricula plus social media, discussion forums, events, conferences, a speakers’ bureau and more.

For Collins, science readily enhances his faith and serves as a form of worship. The Maryland resident said he likes to think of the Great Physician as the universe’s ultimate scientist.

“I certainly never expected to have a leading voice in the science-faith debates,” he wrote. “As a Christian for 43 years, I have found joyful harmony between the scientific and spiritual worldviews, and have never encountered an irreconcilable difference.”

To learn more about Christian Union’s ministry at some of the nation’s most influential universities, please click here.

To join a movement that is developing Christian leaders to transform our nation, please click here.

Editor’s note: This article was reprinted with permission from Christian Union: The Magazine.For more information about Christian Union, visit www.christianunion.org.