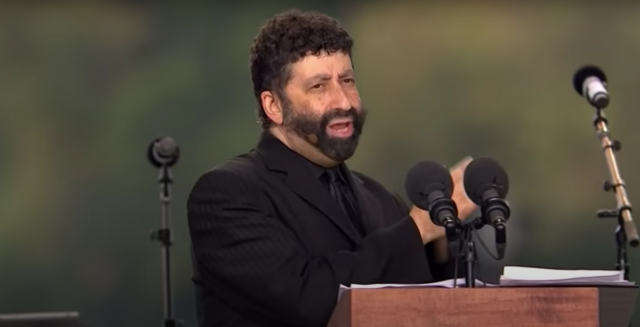 For Jonathan Cahn, the time is now for the United States to turn back to God – or else.

Cahn, a messianic rabbi and pastor, gave an impassioned speech at The Return, a prophetic worship celebration at the National Mall on Sept. 26. Cahn heads the Beth Israel Worship Center in Wayne, a multi-cultural house of worship, and home of Hope of the World ministries.

Cahn has been working toward and envisioning something like The Return since the publication of “The Harbinger,” which made The New York Times’ bestseller list. In it, Cahn states that God has used nine events, or harbingers, including 9/11 and the Great Recession, to get the country’s attention, and return to Him; Or face judgement, just as Israel did.

Cahn compared what ancient Israel did during the prophet Jeremiah’s time to what America is doing now. They eliminated God from everyday life.

“As Israel drover the Lord out, the people opened up a vacuum,” Cahn said. “A flood of other gods rushed in.”

The gods of prosperity, desire, carnality, sexual immorality, and self-expression, rushed in Cahn said. They redefined truth. What was evil they now called good and what was once good, was now evil.

“In the midst of our blessings and our prosperity, we too have turned away from the God of our foundation. We’ve estranged ourselves from Him,” Cahn said.

One group that has faced the consequences of these choices has been the 60 million unborn babies aborted since the landmark Supreme Court case Roe v. Wade in 1973.

“It was here that their collective murder was blessed and given sanction,” Cahn said. “To shed the blood of an unborn baby, is to murder a human life, and the most innocent of human lives.”